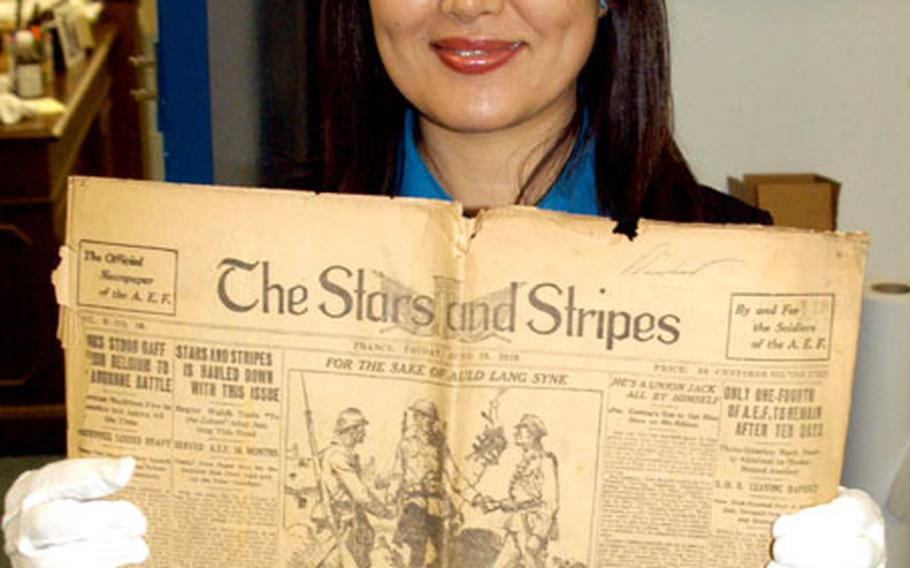 2nd ID Museum technician Incha Koslosky with a copy of the last edition of Stars and Stripes produced during World War I. (Seth Robson / S&S)

2nd ID Museum technician Incha Koslosky with a copy of the last edition of Stars and Stripes produced during World War I. (Seth Robson / S&S) 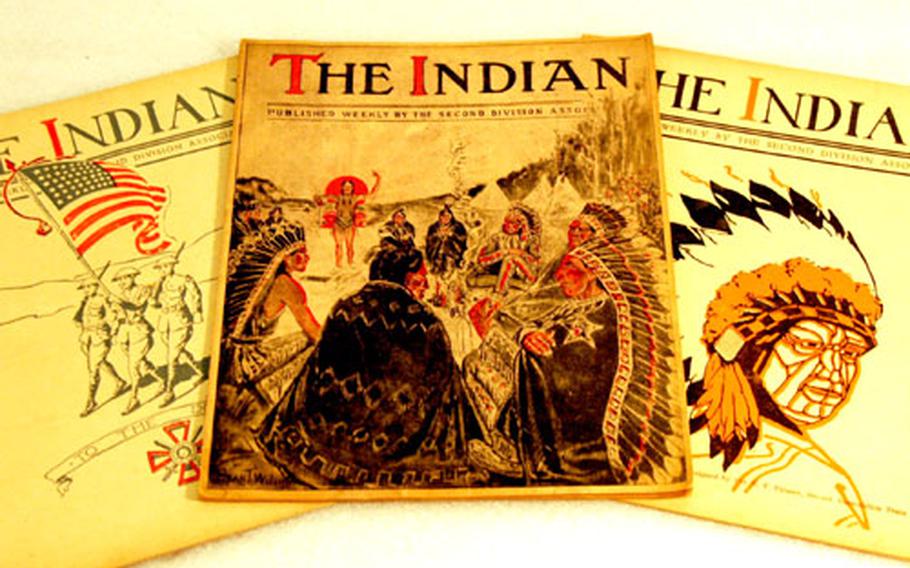 CAMP RED CLOUD, South Korea &#8212; The son of a 2nd Infantry Division World War I veteran has donated a pair of rare copies of Stars and Stripes, including the last edition produced during the Great War, to the 2nd ID Museum in South Korea.

The newspapers will be preserved by the museum along with a series of recently donated Indian magazines, the precursors of the Indianhead - 2nd ID&#8217;s official in-house publication, museum officials said.

Disher told the Kileen Daily Herald he wanted the newspapers cared for and put on display.

The old newspapers have much in common with today&#8217;s Stars and Stripes but are printed on larger, broadsheet paper and were produced just once a week instead of daily.

The front page includes a message from then-Secretary of War Newton D. Baker, who recently had visited the trenches, and a report on the taking of 17,000 German prisoners of war. The most prominent story, featuring an illustration of a U.S. soldier carrying a small child, is about a campaign to raise money to care for 500 orphans of French soldiers killed in the war.

The 1919 newspaper includes a lighthearted recap of Stars and Stripes&#8217; 16 months in print during WWI.

&#8220;The Stars and Stripes is, as far as we know, the only subdivision of the AEF (American Expeditionary Force) that does not claim to have won the war single handed &#8230; but they say we helped a bit,&#8221; reads the story.

&#8220;Besides actual winning of battles, their participation braced Allied morale greatly. &#8230; At Catigny the first of the American divisions to be so employed was placed at the apex of the deepest and most dangerous of all the salients driven by the Germans into the allied front&#8230;

&#8220;Yanks who have courted the vivacious French mademoiselle in Paris and elsewhere and who have been compelled to ask the skipper for an occasional loan in order to shower libations of champagne and nougatines at the feet of the sweetest girl in the world and all that will turn pink with envy to learn what some of the other member of the AEF are getting away with&#8230;

&#8220;To date 12 doughboys (U.S. soldiers) on the Murman Coast in far off Russia near Archangel have been married, and as far as can be proved they did it by satisfying their lady love&#8217;s sweet tooth with candles and blubber oil,&#8221; the story reads.

In other news, soldiers in Vienna complain of a shortage of golf balls while Pvt. Wendell Cutling, of the American Embarkation Centre Headquarters, reportedly is unconcerned about Parisian girls&#8217; inability to buy stockings and the fact that he&#8217;d been so busy &#8220;helping to whip Germany that he hasn&#8217;t had time to learn the Shimmy Shiver&#8221; dance.

He is more worried about where to put his ninth medal for valor.

There are advertisements for Gillette razor blades and Wrigleys Spearmint chewing gum and the sports pages feature photographs and reports on track and field, swimming, baseball and golf.

The back page of the paper includes a photograph of waving French children with the words &#8220;Goodbye, goodnight Messieurs Les Americains.&#8221;