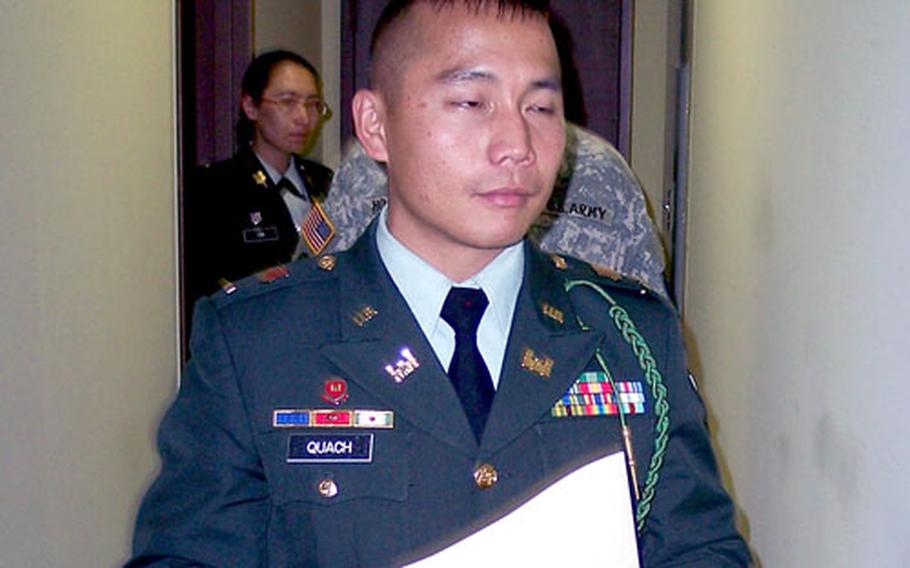 Second Lt. Phuong Quach walks out of a Camp Casey courtroom Tuesday after being convicted on charges of indecent assault and making a false sworn statement. Military judge Col. Gregory Gross sentenced Quach to one year in jail, forfeiture of all pay and dismissal from the Army. (Erik Slavin / S&S)

CAMP CASEY, South Korea &#8212; An Army second lieutenant was sentenced at a court-martial on Tuesday to one year in jail for sexually assaulting a private and making a false official statement afterward.

Quach was found not guilty of aiding and abetting two underage enlisted soldiers to violate a general order by serving them alcohol. In his decision, Gross cited the government&#8217;s failure to introduce documentation citing the general order&#8217;s date.

Quach invited three junior enlisted soldiers to his quarters, then served them Jell-O shots made from soju liquor and topped them with high-proof rum, according to testimony. One of the privates said that he passed out, then awoke in the morning in Quach&#8217;s bed to find Quach clasping the private&#8217;s genitals.

On Tuesday, defense attorneys Capt. Karen Riddle and Capt. Lynn Williams offered a vision of Quach as a hard-working officer who cared about enlisted soldiers and was baited into a confession. The defense also emphasized that Quach did not force the soldiers to drink or to come to his barracks.

A criminal investigations agent testified he used multiple interview techniques in a second interview with Quach. The agent said Quach responded positively to a &#8220;mistaken identity theme,&#8221; during which the agent suggested that Quach thought the private was a female officer whom he knew.

The private said the assault has affected his formerly passive demeanor.

The private also said the incident has negatively affected his focus on work and his desire to remain in the Army. He continues to question whether he could have done anything differently.

Following the private&#8217;s testimony, multiple soldiers came forth as defense witnesses to show support for Quach, whom they said was an excellent officer who cared deeply for his family and friends.

Quach declined to speak on his own behalf but offered the court an unsworn written statement saying that he would never make the same mistake.

During sentencing, Gross added the federal conviction would also mean that Quach would have to register as a sex offender upon return to the United States.