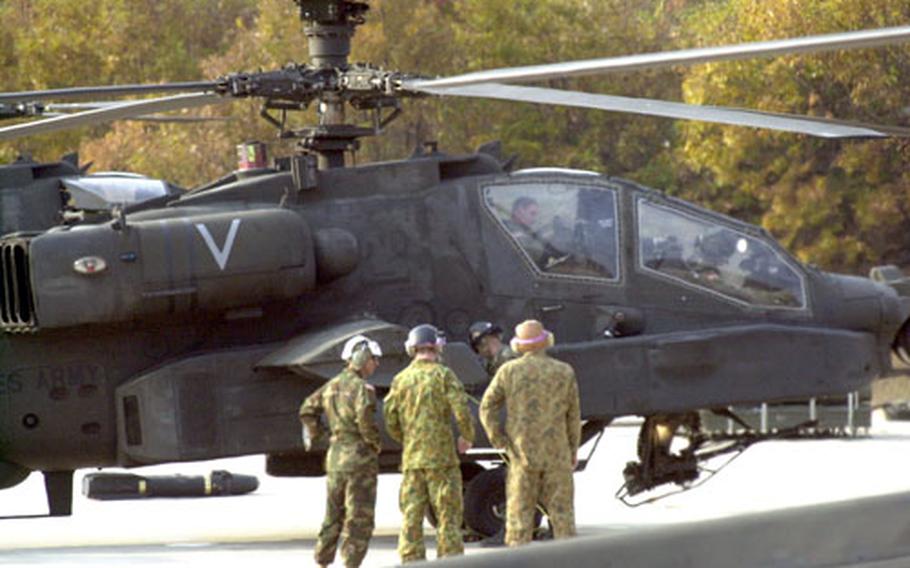 Beginning in 2007, the Australian Army will employ 22 Tiger Armed Reconnaissance Helicopters, which are similar to the Apaches.

Seven Australian soldiers witnessed Apaches fire for the first time this week at the range, then learned how to refuel and rearm the helicopters. The Australians will live and work with their American counterparts through Nov. 11.

Chief Warrant Officer Steven Rosini, a liaison officer to the Australian Army, helped the two services through the months of paperwork and protocol necessary to get the Aussies to the range.

If the Australian soldiers can acquire the skills, knowledge and attitudes necessary to get the helicopters into the air, it will be far more advantageous than if everyone started from scratch in Australia next year, he said.

Australian soldiers say the training has been eye-opening. On Tuesday, they paused only as the Apaches training overhead delivered their booming payloads toward hillside targets.

Unlike the Apache, the Tiger will be used primarily for reconnaissance, McEvoy said.

However, the Tiger also is capable of destroying tanks and other large targets. Like the Apache, it is capable of firing 30 mm guns, rockets and laser-guided Hellfire missiles.

The Australian regiment will recommend to its higher headquarters that the training be made an annual event and expanded to include pilots, McEvoy said.