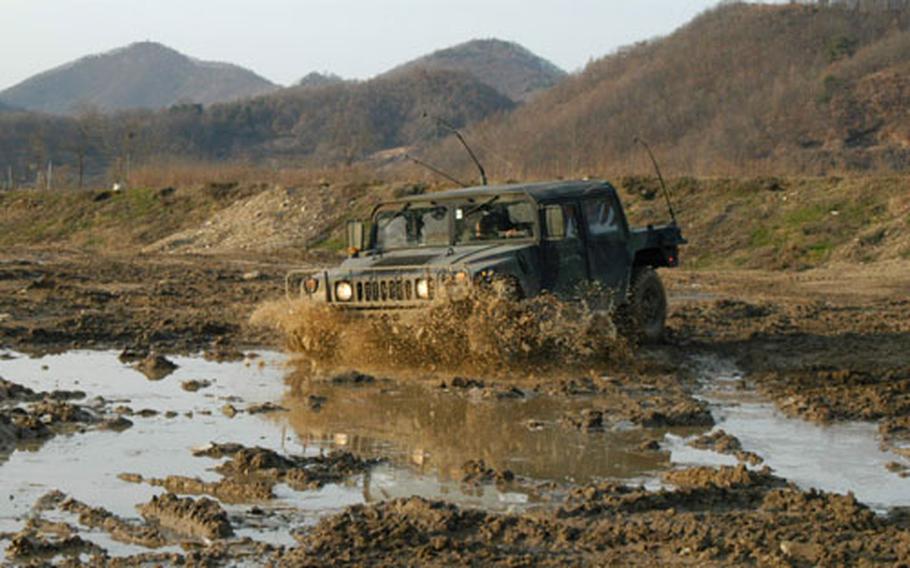 TWIN BRIDGES TRAINING AREA, South Korea &#8212; Mud, ruts, rocks, steep slopes and sharp corners are some of the obstacles that litter a course at this training area near Camp Casey, where 400 military drivers from the 2nd Infantry Division are sharpening their skills this month.

By day, the course is tough enough to challenge even the best civilian off-road vehicle.

At night, wearing night-vision goggles and piloting a large military transport vehicle, drivers must have their wits about them to negotiate a three-mile track designed to simulate the tough terrain often encountered in South Korea.

Five hundred soldiers, including drivers, instructors and support personnel, are involved in 2ID Drivers Exercise, which runs from Dec. 1 to Dec. 12, officials said.

Drivers&#8217; training begins with classroom instruction before the soldiers head onto the course to test their skills in HMMWVs; heavy-duty cargo trucks; armored personnel carriers; and cargo vehicles.

A driver&#8217;s first run is in broad daylight. If he completes that successfully, he drives the course in the dark before the final and most challenging run wearing the night-vision goggles.

Col. Ed Daly, commander of the 702nd Maintenance Support Battalion, who is overseeing the exercise, said safety is a priority. Trainee drivers travel in convoys with master drivers.

&#8220;We have evaluators throughout the unit making sure the operators are doing the right things and using their equipment to standard,&#8221; he said.

Daly said driving with night-vision goggles is a learned skill that requires 40 hours of classroom study and 40 hours of field training.

&#8220;It takes repetition and understanding, and training is required to build the confidence to use night-vision goggles,&#8221; he added.

Out on the course, Staff Sgt. Jimmy Cruz, also of the 702nd, put a four-seat command Hummer through its paces Thursday, handling a pool of waste-deep mud with ease before negotiating a steep down-slope and plowing through a pond-sized puddle, spraying brown water in every direction.

The 702nd&#8217;s operations officer for the exercise, Maj. Hugh Davis, said this month&#8217;s training is the second time the exercise has been run.

&#8220;It was started last quarter after the 2ID commander, Maj. Gen. John Wood, asked the master drivers to build team proficiency and get drivers into an off-road area to increase soldiers&#8217; level of training,&#8221; Davis said.

Hours on the course count toward a qualification but drivers receive the bulk of their training with their units.

Pfc. Jeremiah Gebhart, a driver training at Twin Bridges, said the daylight run through the course was not as hard as he thought it would be, but he was looking forward to trying it at night.

&#8220;Everything is green, and you have no depth perception and your field of vision is only 30 degrees. Some people get nauseous and you get headaches from wearing them,&#8221; he said. &#8220;However, after you have worn them a couple of times you get used to them.&#8221;

Sgt. 1st Class Lindsay Ofield, a senior master driver for the Division Artillery, has been driving Army vehicles for 15 years. When he started in South Korea in 1988, he was driving Jeeps.

Ofield says modern driving instructors are starting from scratch with many students.

&#8220;Today, a lot of the kids have never driven before because the [civilian] licensing rules are so strict. They certainly haven&#8217;t driven vehicles like these,&#8221; Ofield said.

Experience in an SUV, even a civilian Hummer, does not qualify you to drive a military Hummer, he said.