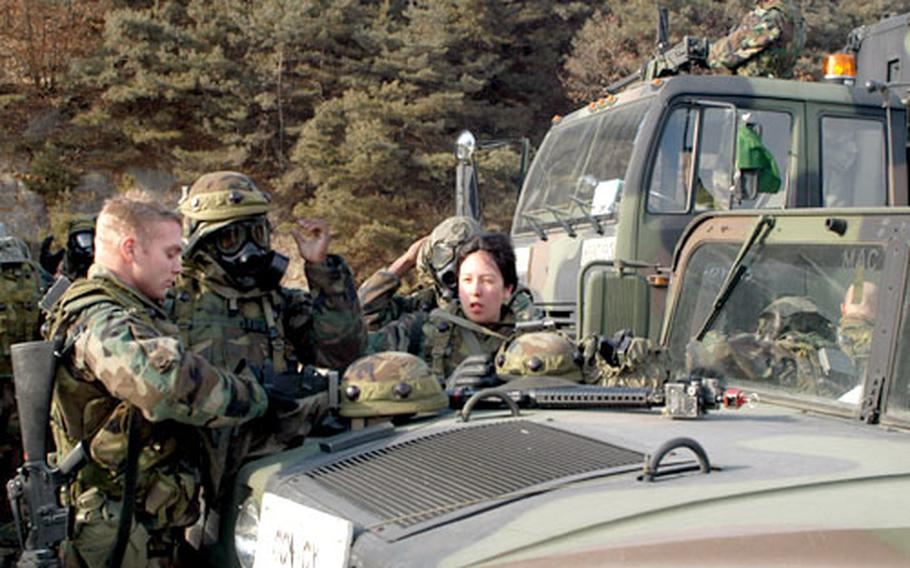 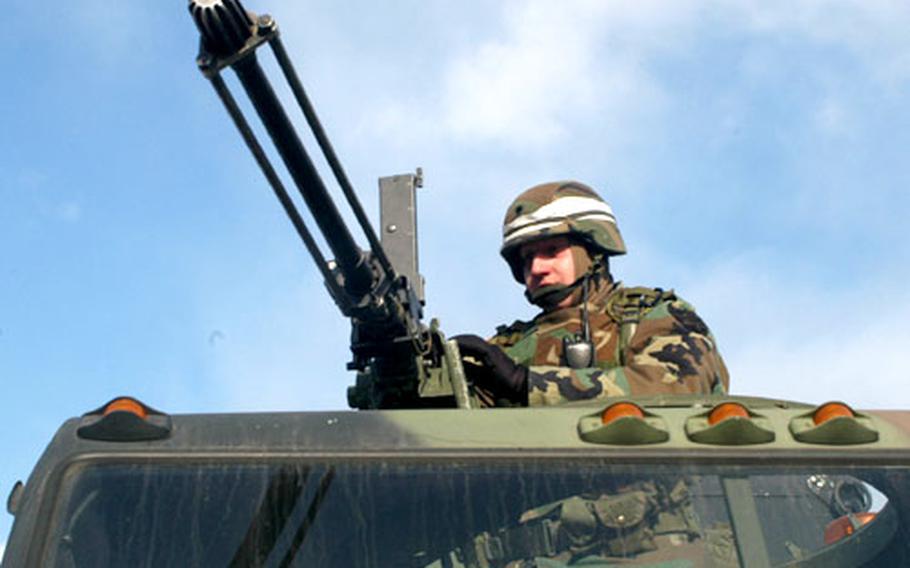 RODRIGUEZ RANGE, South Korea &#8212; It was the convoy from hell.

First there was an ambush by four terrorists in the streets of a small town, then an improvised explosive device, or IED, went off and finally the convoy was attacked with nuclear, biological or chemical, or NBC, weapons.

Such was the training scenario faced by the 2nd Infantry Division&#8217;s Aviation Brigade soldiers at Rodriguez Range on Tuesday.

Chief Warrant Officer Oscar Blaine, 45, a 602nd Aviation Support Battalion soldier from Brooklyn, N.Y., said the exercise, which included a live-fire component in Warrior Valley, would be repeated nine times during the week with about 15 soldiers participating in each convoy.

&#8220;The goal is to simulate contact just as you would have in combat. They had so many problems with convoys being attacked in Iraq,&#8221; he said.

When a convoy from the Aviation Brigade&#8217;s Headquarters and Headquarters Company went through the exercise, the vehicles were ambushed by four &#8220;terrorists&#8221; in an urban training area on Rodriguez Range.

Next, the first vehicle in the convoy was damaged by an IED. Soldiers pulled back and called for help to have the device removed, then recovered their damaged vehicle.

At that point, they were attacked with NBC weapons and forced to don protective masks and gloves.

One of the soldiers in the convoy, Pvt. Elizabeth Mlinko, 19, of North Ridgeville, Ohio, didn&#8217;t mind putting on the gear, which offered some protection from the freezing temperatures at the range Tuesday.

&#8220;It is hard to concentrate when you are shaking in your seat. The NBC gear covered your face and made you a lot warmer because the wind was not blowing on you,&#8221; she said.

The training highlighted a lot of important things soldiers should be aware of during convoys, she said.

&#8220;The ambush part in the city happened pretty quick. I didn&#8217;t know that a whole hour went by. It was cool to see how we would handle it. It was amazing how we reacted and got through safely,&#8221; she said.

Commander of the 602nd&#8217;s Company A, Maj. Frederick Fair, 41, of Evergreen, Ala., said the convoy training had applications in all theaters, not just South Korea or Iraq.

&#8220;The bottom line is to build competence and proficiency in their abilities to react to a convoy ambush. Korea has a lot of soldiers that have never conducted this training. When we go through (it&#8217;s) their first opportunity to do a convoy live fire and they are learning a lot,&#8221; he said.

Sgt. Bryan Zeppa, 28, of Tampa, Fla., got his first taste of convoy command during the training.