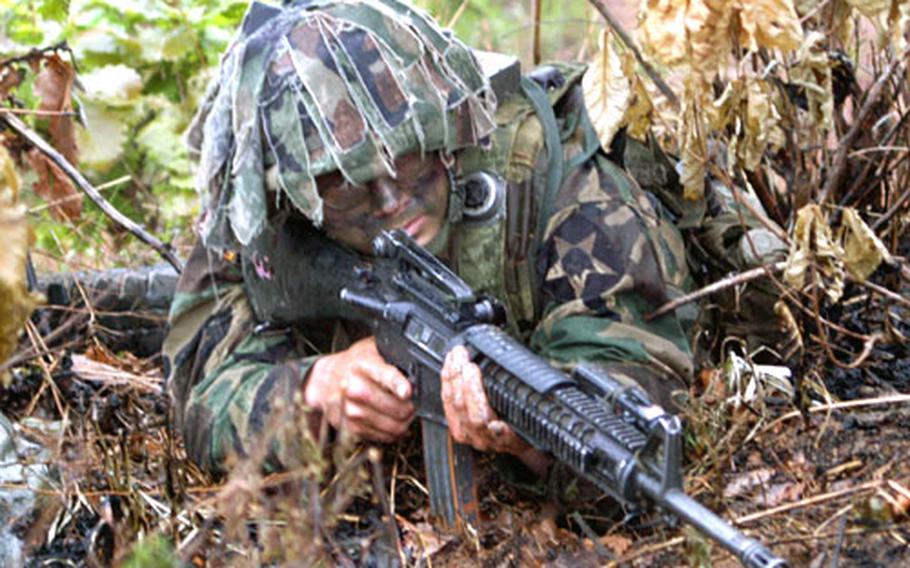 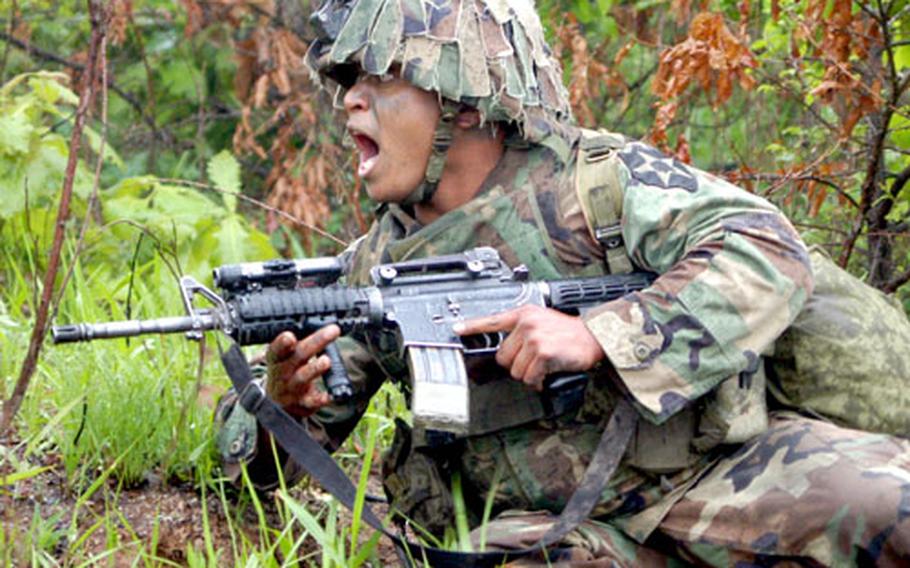 RODRIGUEZ RANGE, South Korea &#8212; While their brothers in arms from the 2nd Brigade absorb the news they&#8217;ll soon be headed to Iraq, Bradley companies from other units in the 2nd Infantry Division are wrapping up a month of training at Rodriguez Range with live-fire exercises designed to take crew, squad and platoon skills to the next level.

&#8220;We have been out here [at Rodriguez Range] a month. This is our culminating event, where we are putting together everything we have been working on at crew, squad and platoon levels,&#8221; Blain said.

The company formed a team of three mechanized infantry platoons and tank and engineer platoons supported by artillery, mortars, Apache helicopters and F-16 jets during the exercise.

The scenario pitted the company team against a mechanized enemy force occupying key terrain at the range, Blain said. Company D&#8217;s job was to act as the lead company of a battalion task force.

&#8220;We have to destroy the enemy holding the key ground and occupy and secure the terrain he is holding,&#8221; Blain said.

The Company D attack began with an artillery and mortar barrage, sending up puffs of smoke from the hills at the back of the range. Then, smoke began to billow up around one of the roads leading onto the range, obscuring engineers breaching an obstacle so that Bradleys and dismounted infantry could storm Objective Deuce &#8212; a piece of high ground occupied by enemy soldiers and armored personnel carriers.

As the battle raged, the tank platoon moved into the middle of the range and began to engage stationary and moving targets representing enemy armor that might attack the company&#8217;s flank. All the time, machine guns rattled and tracers could be seen flaming from the tanks as they annihilated the enemy targets.

Once Objective Deuce was secure, 2-9&#8217;s 1st Platoon moved up to Objective Niner, defended by two squads of dismounted infantry dug into a bunker complex.

Sgt. 1st Class Dean Sturch commanded a Bradley as it moved toward the objective, spraying the bunkers with machine-gun fire.

While the Bradleys suppressed the enemy, 1st Platoon&#8217;s infantry moved in, storming up a hill and laying down a hail of fire at the pop-up targets. Staff Sgt. Chad Nelson, a squad leader, angrily barked orders.

With two team leaders declared &#8220;casualties,&#8221; Nelson had to keep his men moving at the correct speed, he said.

&#8220;The squad leader has to control the teams. If the team leaders are falling back or lose control of the teams he has got to make sure they are not going too fast or too slow,&#8221; Nelson said.

When the shooting stopped, Pvt. Casey Belovsky found himself at the top of a hill guarding a road leading to Objective Niner. It was the first time he&#8217;d cleared a bunker complex under live-fire conditions, he said, which certainly added some punch to the training.

&#8220;You concentrate a lot more on staying in your lanes. I could distinguish between the live rounds and blanks. I could hear the zing of it going through the trees,&#8221; he said.

From Objective Niner, Company D moved to its final objective &#8212; Manchu &#8212; to complete the exercise.

The 2-9 companies also stage a live-fire defensive exercise involving an enemy counterattack and support from the Apaches and F-16s at night, Blain said. 2-9&#8217;s B and C companies will complete that drill later this week.