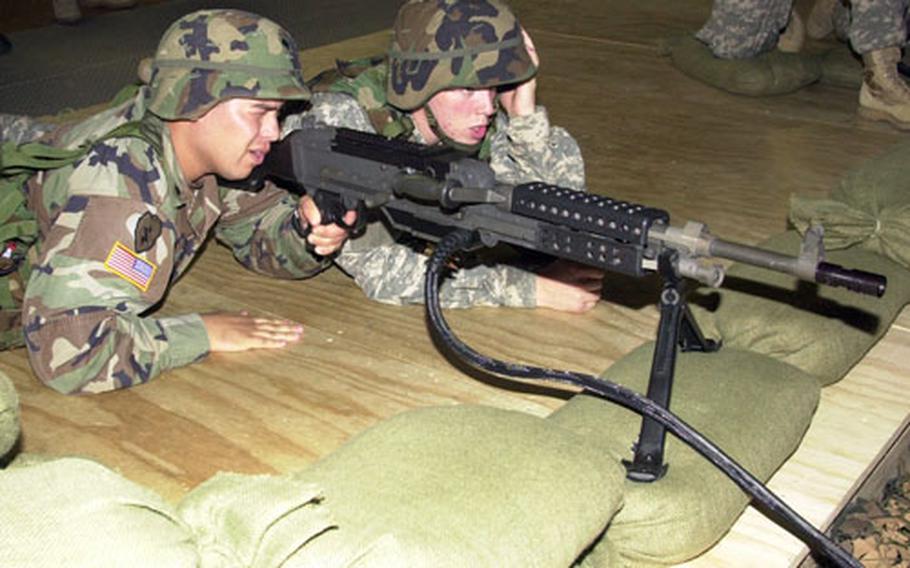 Several hundred soldiers have arrived in Germany so far with 1st Squadron &#8212; which is equivalent to an infantry battalion equipped with Stryker eight-wheeled armored personnel carriers. Some have been here three weeks but most arrived in the last few days, he said.

The simulator training involved four-man teams and nine-man squads taking cover behind piles of bricks and firing at enemies in urban areas or out in the open.

Vilseck Training Aids Devices and Simulators manager Steve Wesnoski said the simulator could put soldiers through 400 scenarios including urban combat with civilians on the battlefield.

Wesnoski said many units drastically improved their performance on live-fire ranges after training on the simulator.

&#8220;They are retaining the basic skills that make soldiers successful in combat. This will carry us through to July or August when our equipment arrives. We expect to be out on the (live fire) range this fall,&#8221; he said.

One of the soldiers practicing on the simulator, Pfc. Michael Couch, 20, of Burkesville, Ky., said he was glad to be back training after weeks of paperwork since he arrived in Germany on June 10.

Another Company A soldier doing the training, Pfc. Devon McGinnis, 19, from Horseheads, N.Y., also got to Germany last month, but said he&#8217;d kept up his sniper practice at Fort Lewis, Wash., until he left.

The best thing about Germany so far was the World Cup, he said.