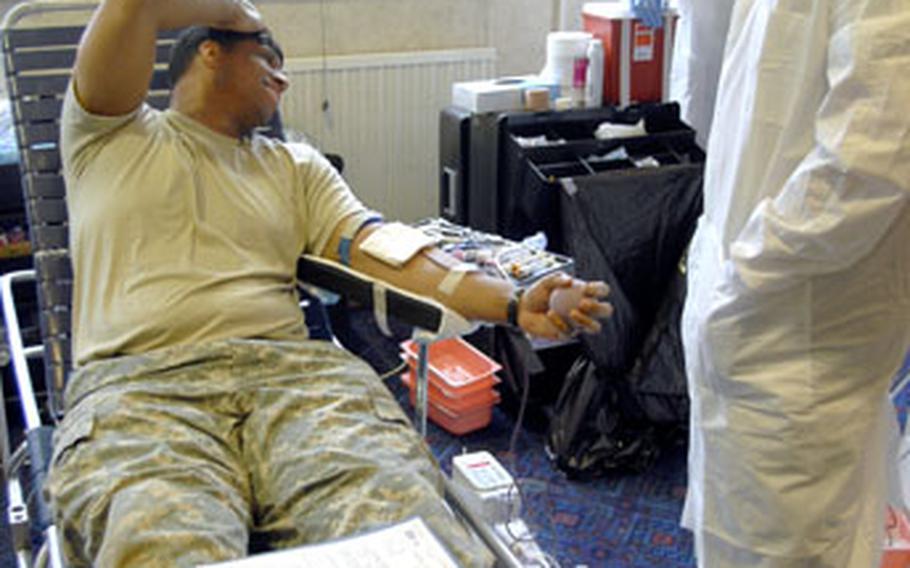 GRAFENW&#214;HR, Germany &#8212; Officials are expecting some 800 2nd Cavalry (Stryker) Regiment soldiers to give blood this week in an effort to break the U.S. Army Europe record for a blood drive.

The soldiers&#8217; efforts come at just the right time for comrades downrange, according to Maj. Matthew Rice, 36, the 2nd Cav medical officer, who is overseeing his unit&#8217;s participation in the drive.

The drive runs through Friday. On Monday, 170 soldiers showed up to give blood, with 120 units successfully collected, Rice said.

On Tuesday, white-coated technicians from the 266th Medical Logistics Battalion and the 212th Combat Support Hospital screened patients and made them comfortable on stretchers while the blood was taken.

Regimental Headquarters and Headquarters Company soldier Sgt. Lidia Redd, 30, of New York, looked away when a needle was inserted in her arm.

Another 2nd Cav soldier, Spc. Benjamin Vogelseng, 26, of New York, said it was the fifth time he had donated.

&#8220;It seems like the right thing to do. Somebody out there might need it. You feel proud of yourself, but you are tired and usually want to take a nap afterward,&#8221; he said.