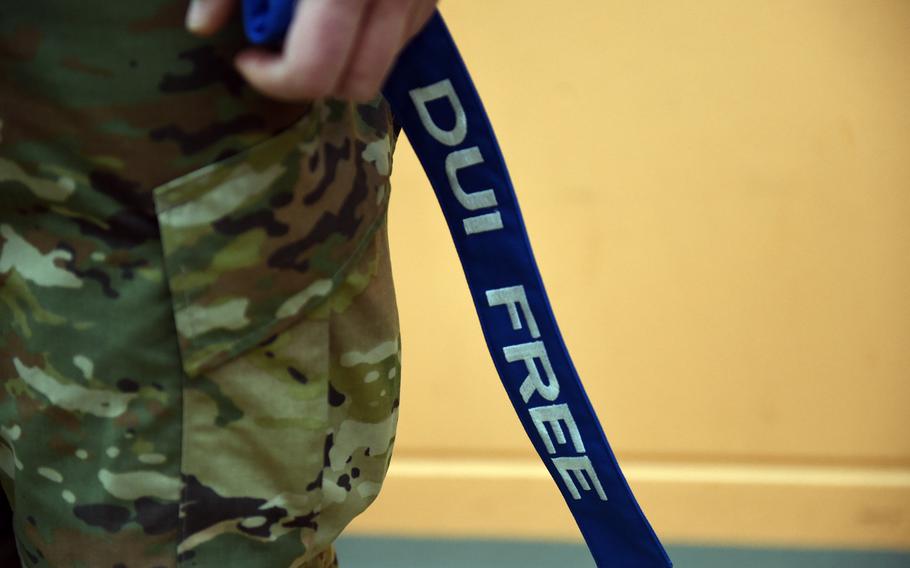 Buy Photo
A "No DUI Streamer" being held by a 2nd Cavalry Regiment soldier during a ceremony, Friday, April 19, 2019. (Martin Egnash/Stars and Stripes) Buy Photo
Soldiers with the Army's 2nd Cavalry Regiment during a ceremony to fix "No DUI Streamer" to squadrons' guidons Friday, April 19, 2019. (Martin Egnash/Stars and Stripes)

GRAFENWOEHR, Germany — One U.S. Army unit in Europe has found a popular way to keep soldiers from getting behind the wheel after downing steins of the local Bavarian lager.

The Army’s 2nd Cavalry Regiment is giving out four-day weekend passes for each squadron that goes 76 days without any of its soldiers getting a DUI.

The rewards are part of the regiment’s No DUI campaign, which was launched after a rash of alcohol-related incidents late last year and combines the incentives, a volunteer designated driver program and a celebratory activities day.

While many soldiers may find it easy not to make the decision to drink and drive, just one member of a squadron can ruin it for everyone else.

For troops stationed stateside, it may seem strange that soldiers would earn extra days off for not breaking the law. But units stationed in Germany face unique challenges, the regiment’s leaders said.

“The blood alcohol content limits are lower for our soldiers here in Germany,” said Col. Thomas Hough, the regimental commander.

The legal limit to operate a vehicle is a 0.08% blood alcohol level in nearly all states and under a recent change to the Uniform Code of Military Justice, compared to 0.05% in Germany. The limit is 0.03% in Japan, where servicemember DUI arrests have repeatedly inflamed political tensions in Okinawa.

German beer often has a higher alcohol content by volume, making it possible for some people to be above the legal limit with less beers consumed than back in the United States.

The regiment recently started a designated driver program in which soldiers earn volunteer service hours by serving as on-call drivers for soldiers who need an unplanned ride home.

The program, which promises to keep those who use it anonymous, came about after the regiment saw a sharp rise in DUIs last fall.

The program seems to be working, regiment officials said.

“We are about six months into initiating these efforts and seeing a monthly downtrend in DUIs,” said Maj. Gordon Mok, the regimental surgeon.

There were nine DUIs throughout the regiment in December, when the program began. As of Thursday, there had been three in April. Regiment officials declined to provide further DUI figures from the past year.

At Grafenwoehr, the 2nd Cavalry Regiment also has ceremonies to fix “No DUI” streamers to the squadrons’ guidons, marking periods of 90 days, 180 days or longer without drunk driving incidents.

Earlier this month, the Warhorse and Outlaw troops of the regiment’s 4th Squadron earned 90-day and 180-day streamers, respectively.

The squadrons can determine if they want to give an additional day off or some other type of award when they receive a 180-day No DUI streamer, said Lt. Ellen Brabo, a regiment spokeswoman.