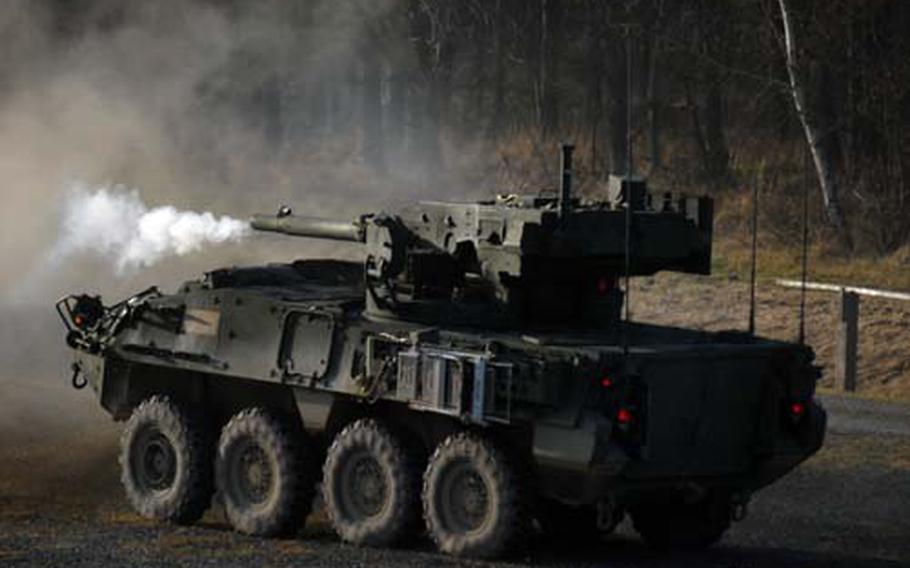 A 2nd Stryker Cavalry Regiment Mobile Gun System fires a round during a demonstration Thursday at Grafenwoehr Training Area on Thursday. The MGS turret is the same as the one mounted on an M1A1 Abrams tank. (Seth Robson / S&S)

A 2nd Stryker Cavalry Regiment Mobile Gun System fires a round during a demonstration Thursday at Grafenwoehr Training Area on Thursday. The MGS turret is the same as the one mounted on an M1A1 Abrams tank. (Seth Robson / S&S) 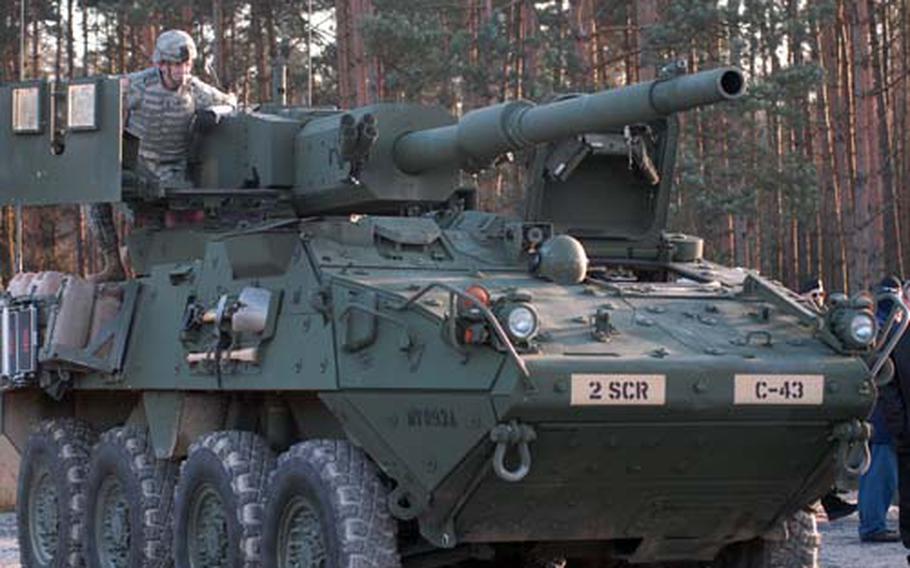 A 2nd Stryker Cavalry Regiment soldier sits atop a Mobile Gun System at at Grafenwoehr Training Area, Germany, on Thursday. The soldiers were demonstrating the weapon for for delegates from the Organization for Security and Cooperation in Europe. (Seth Robson / S&S) 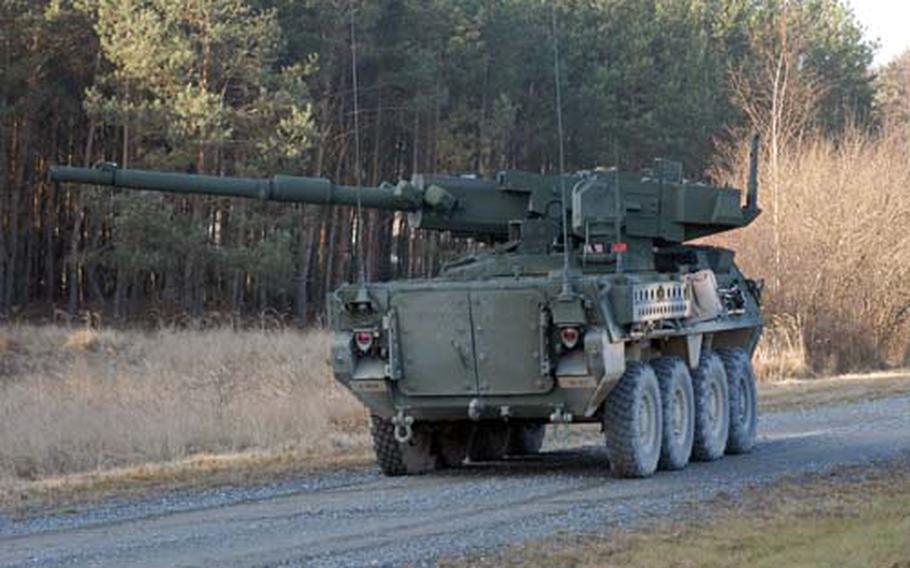 A 2nd Stryker Cavalry Regiment Mobile Gun System drive along a road at Grafenwoehr Training Area, Germany, on Thursday. The MGS, fielded the first time in Europe, can fire four different types of ammunition, depending on the situation. (Seth Robson / S&S)

GRAFENW&#214;HR, Germany &#8212; The 2nd Stryker Cavalry Regiment will have a powerful new weapon when it deploys to Afghanistan next summer.

In combat, the MGS is part of a platoon with three ordinary Strykers carrying infantry soldiers. The MGS sits back, keeping a lookout for enemy movement or activity, said Staff Sgt. Donald Phillips, a master gunner in the unit.

&#8220;It can be called forward to engage enemy dismounts or vehicles,&#8221; he said Thursday as the unit was showing off the new weapon to a delegation from the Organization for Security and Cooperation in Europe. &#8220;It can also provide a passage in a wall for infantry to move through.&#8221;

The 2nd Cav soldiers received nine MGSs in September, and they will take them to Afghanistan when the unit deploys next summer, Phillips said. Additionally, they will take stock of another nine of the high-power weapons from the Stryker unit already there.

The vehicle&#8217;s purpose is infantry support, said Phillips, who has been working with the MGS since its inception in 2006.

During this week&#8217;s demonstration, Sgt. 1st Class Bobby Lightner, a master gunner, opened the back of an MGS to show the automatic loading system that can send 18 rounds to the vehicle&#8217;s 105 mm gun tube.

Lightner said the MGS crews first have to qualify on the weapon, then they can train for their upcoming mission in Afghanistan.

&#8220;The crews will move on to realistic scenarios designed to prepare them for combat ... things like shooting walls and bunkers and firing on the move,&#8221; he said. &#8220;You can combine the infantry operations with the MGS to do an entire scenario using mounted and dismounted operations.&#8221;

And, if need be, the MGS could take out an enemy tank ... not that there are any in Afghanistan.

Mostly, the MGSs are being used in Afghanistan to blast walled compounds so ground troops can gain entry, he said.