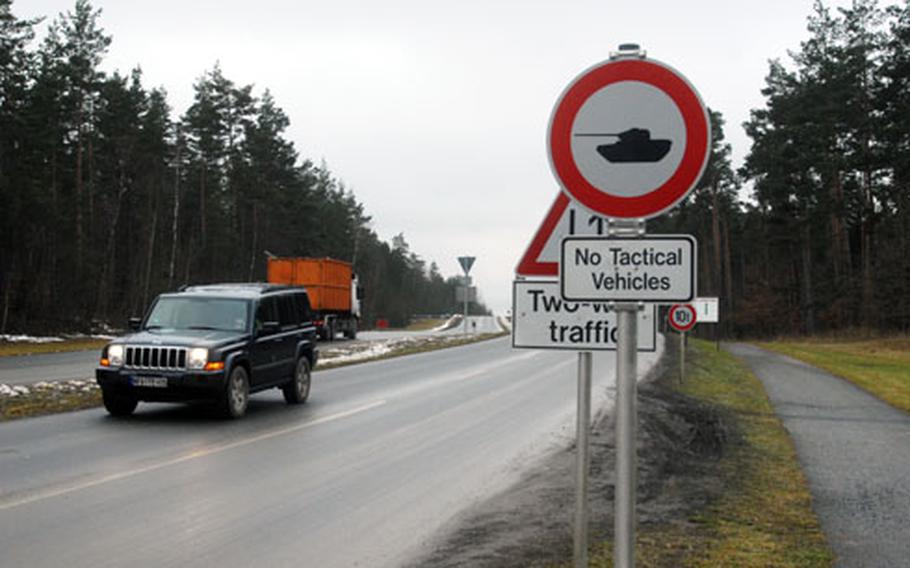 A truck in the background travels on the tank trail which runs parallel to an ordinary on-post road in the foreground in Grafenwöhr, Germany. The tank trail connects the communities of Vilseck and Grafenwöhr, and some soldiers would like to be able to drive private automobiles on the trail to save travel times between the two bases. (Seth Robson/S&S)

VILSECK, Germany &#8212; In Baghdad, they drove Stryker armored personnel carriers through bumper-to-bumper traffic on daily patrols through a city of 6.5 million people.

Now that they are home, the 2nd Stryker Cavalry Regiment soldiers want to drive their private autos on an on-post, paved road that&#8217;s reserved for military vehicles.

The road &#8212; simply known as the tank trail &#8212; links their base in Vilseck with the main post in Grafenw&#246;hr. The ban on civilian vehicles from the road has long been a source of irritation to people living and working in the two communities.

The Army regards the two posts as a single facility, and as a result, many services are located only at one post or the other. For example, there is only one military police station, at Vilseck; and one post exchange, at Grafenw&#246;hr.

As it stands now, anyone wanting to get between the two posts must use the B-299 highway, which is off-post. And even though the speed limit off post (about 60 mph) is higher than that of the tank trail (up to 40 mph), the trip between the two communities on the off-post roads takes 10 minutes longer.

The issue cropped up, not for the first time, at a town hall meeting in Vilseck on Wednesday night. Audience members complained about the 15-mile drive on the off-post road to register vehicles in Grafenw&#246;hr.

"Some of my soldiers have to drive up there three or four times just to register their car," complained one audience member.

"We are looking at over 30 miles round trip when we go to the [post exchange]," said Staff Sgt. Ron Costa, who recently returned from 15 months in Iraq with Company H, 3rd Squadron, 2nd Stryker Cavalry Regiment.

Vilseck is normally a quiet rural community, but it sometimes feels a little like rush hour in Tokyo on workday mornings when traffic backs up in the road leading to the front gate.

"We have soldiers who have to come in 1&#189; hours before work starts just to make it through the front gate," Costa said.

And many 2nd Cav soldiers who live near Grafenw&#246;hr must drive the B-299 highway each morning to get to work.

"I was stuck on that road for two hours in the last snowstorm right next to the side gate (leading to the tank trail)," Costa said.

The gate will be upgraded in years to come, which should alleviate the traffic problem, "... but these plans won&#8217;t do anybody any good in the next few years," he said.

The answer is to allow civilian vehicles to share the tank trail with military traffic, Costa said. "Everyone has conducted combat operations in an urban environment. There has got to be some way we can share that range road."

Sorenson said the issue is being investigated, but noted that family members do not have experience sharing a road with military vehicles.

The garrison is looking at alternative routes, but a big problem is the presence of an ammunition supply point next to the tank trail, which makes the area unsafe for civilian traffic, he said.

Funding will be available in 2013 to move the supply point, but other solutions must be looked at in the interim, Sorenson said.