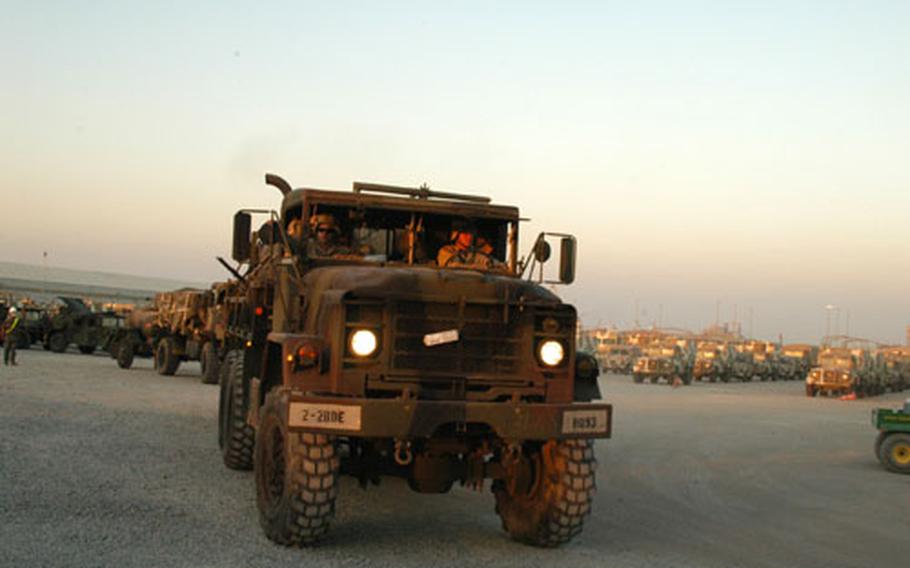 The first Strikeforce convoy rolls from port in Kuwait headed for Camp Buehring on Tuesday. South Korean vehicles deploying at the same time are assembled in the background. (Seth Robson / S&S)

The first Strikeforce convoy rolls from port in Kuwait headed for Camp Buehring on Tuesday. South Korean vehicles deploying at the same time are assembled in the background. (Seth Robson / S&S) 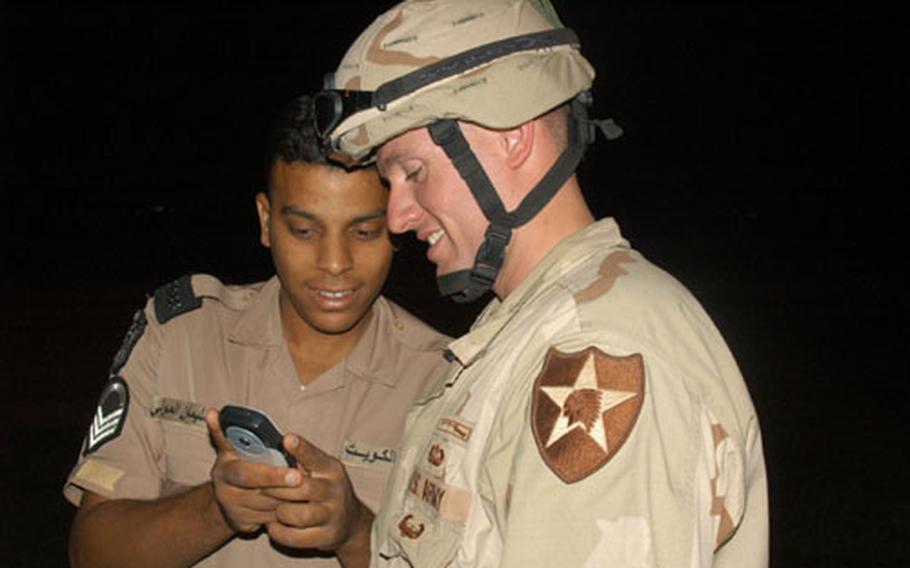 While 2nd ID soldiers are used to convoying on busy roads in South Korea, military leaders had to work out detailed plans across unfamiliar Kuwaiti roads.

Ritz said the model would be used to brief convoy commanders.

&#8220;We will discuss dangers on the highway. This is a heavy traffic area, here there are deep ditches on the side of the road to watch out for, here is an easily identifiable terrain feature,&#8221; he said, pointing out sections of the route.

Soldiers stationed in South Korea train hard on convoys, Ritz said. The deaths of two South Korean schoolgirls hit by a U.S. military vehicle in 2002 resulted in more emphasis on convoy safety within the division, he said.

Getting lost is a particularly bad mistake for a convoy commander, he said.

By the time the drivers for the first convoys arrived at the port a hot sun was beating down. Soon they sweltered in the heat, some in full combat gear including heavy flak jackets.

When an ice truck arrived soldiers quickly surrounded it, broke open bags of ice and emptied them into large orange water coolers that traveled with the convoys.

Next, drivers searched for their vehicles in the marshalling yard, which was packed with both 2nd ID equipment and vehicles from South Korean units also deploying to Iraq.

The soldiers inspected their vehicles to make sure they were roadworthy after the long sea journey.

One the drivers, Cpl. Travis Blihar of Company B, 5th Battalion, 5th Aviation Regiment soon had his Humvee&#8217;s hood up to inspect the engine.

It was not until 6 p.m. that the first convoy rolled out of the yard, joined by a few South Korean vehicles leaving at the same time.

The roads used by the convoys are modern six- and four-lane highways &#8212; far better than the potholed, two-lane roads and farm tracks 2nd ID soldiers drive on in South Korea.

The convoys, traveling in groups of up to 100 vehicles, moved through the port suburbs, passing occasional groves of stunted trees planted in the sand.

They passed massive four-story Kuwaiti mansions, on the same scale as Saddam Hussein&#8217;s palaces in Iraq, rising like pastel-colored movie sets out of the sand. They passed towns resembling U.S. trailer parks that are home to the third-country nationals, who do most of the work in Kuwait.

One convoy passed a collection of caravans, covered in neon lights, where vendors sold everything from food and drink to soccer balls and plastic buckets. A soldier noted the resemblance to a South Korean red light district.

As the sun set, the lights of oil refineries glowed and flames of methane sputtered from the tops of tall chimneys beside the road.

The convoys left civilization and entered the desert when they crossed the Mutla Rise, a distinctive ridgeline near where Kuwaiti and Iraqi forces clashed during the 1991 Gulf War.

The only signs of life out there were a few Bedouin camps, each marked by a vehicle, a tent and a herd of grazing camels.

Kuwaiti police, riding ahead in their black and white cars with roof-lights flashing, guided the convoys through this strange landscape.

Not everything went smoothly. One convoy commander took a wrong turn soon after leaving the port and ended up in a residential area.

Another was taken on an alternative route by the police but was put back on track by Strikeforce commander Col. Gary S. Patton, who moved between convoys in his own vehicle.

&#8220;It was hot, long and very tiring while driving,&#8221; said the young soldier, who drank six liters of water during the day.

McGowan, who had not left Udairi Range and Camp Buehling since arriving in Kuwait before the convoy, was struck by the difference between Kuwait and his humid, green home state of Virginia.

Capt. Andre Takacs, who commands 1-9&#8217;s Company A, led the first convoy to leave the port, said the journey was a challenge.

&#8220;We studied the strip maps and looked at the terrain model but it is always different driving it for the first time,&#8221; he said.

Takacs said the convoy was particularly difficult to command because he was working with soldiers from other units not used to his leadership style.

The Kuwaiti police guiding the convoys appeared to enjoy the soldiers&#8217; company but the language barrier made communication difficult at times, something soldiers are used to in South Korea.

One police officer was particularly friendly, showing Takacs his new state of the art cell phone featuring a display of a scantily clad Arab woman, giving him a pen &#8220;to remember me by&#8221; and throwing Patton a bag of potato chips.

When the Strikeforce commander gave the chips to two of his soldiers the Kuwaiti lawman told them: &#8220;I love you.&#8221;

&#8220;Yes, you must be from California and don&#8217;t speak good English?&#8221; the policeman replied as the convoy left for the final leg of its long journey, arriving at Camp Buehling shortly before midnight.