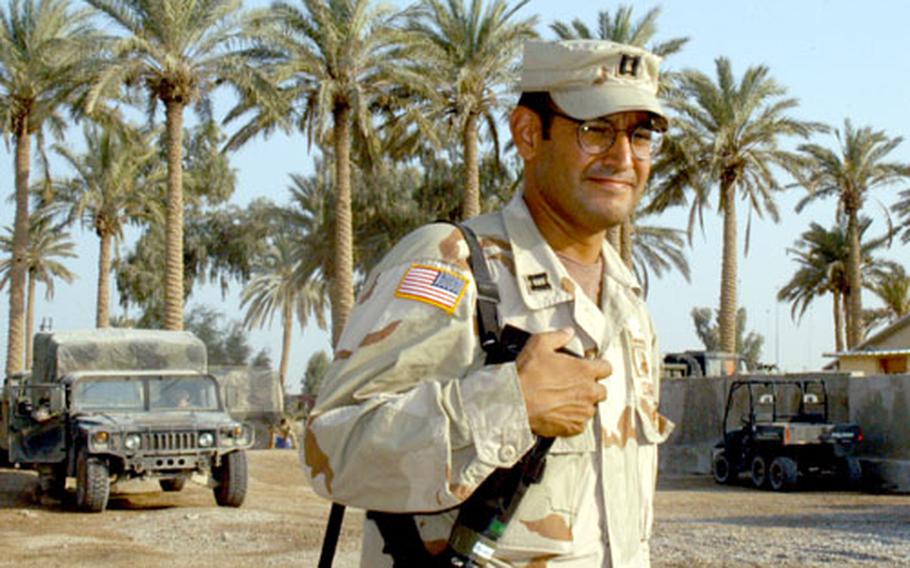 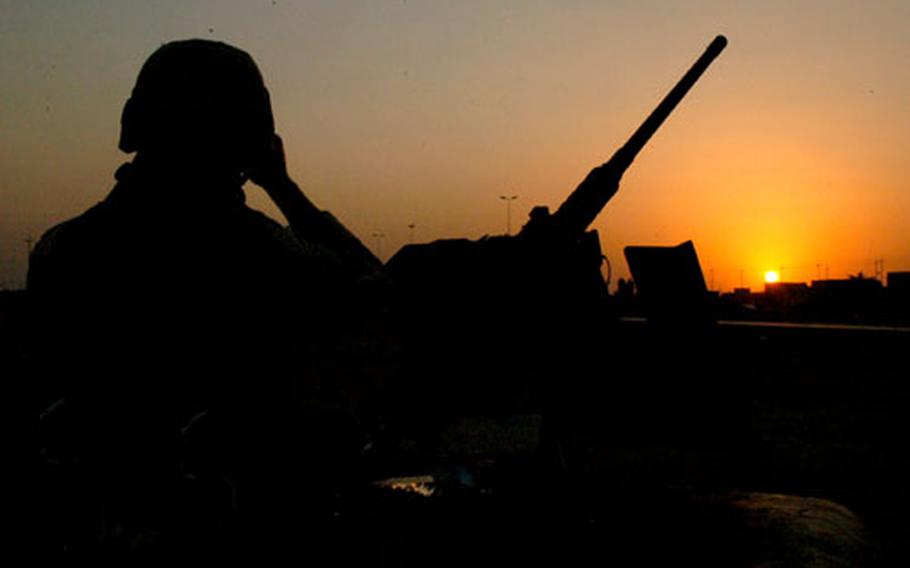 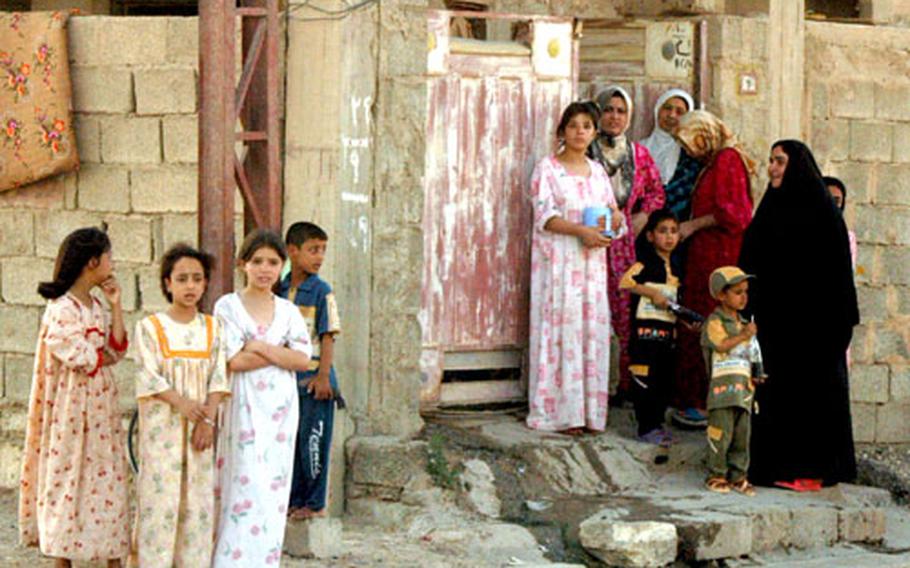 Local women and children peer around a doorway Tuesday in the Iraqi city of Ramadi. Despite the city’s volatile reputation, U.S. troops say the residents are friendly. (Seth Robson / S&S) 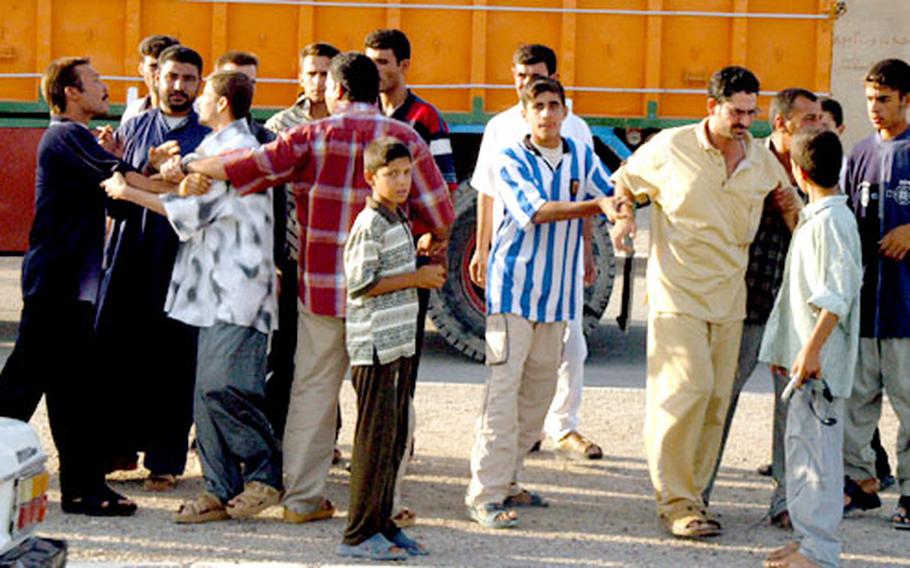 In Ramadi, local residents — like these men arguing over a car accident — often settle disputes by appealing to tribal leaders, rather than the police, for justice. (Seth Robson / S&S)

CAMP RAMADI, Iraq &#8212; The volatile Sunni Muslim city of Ramadi will be in the 2nd Infantry Division&#8217;s 2nd Brigade Combat Team&#8217;s area of operations during a yearlong deployment to Iraq.

The brigade, known as the Strike Force, deployed to the Middle East from bases in South Korea last month and Saturday officially assumes responsibility for the area from the 1st Infantry Division&#8217;s 1st Brigade Combat Team out of Fort Riley, Kan. The area comes under command of the 1st Marine Expeditionary Force, responsible for Al Anbar province, west of Baghdad.

Al Anbar province includes Ramadi, the even more violent nearby town of Fallujah and the long desert border with Syria to the west. Other key towns in the province are the border towns of Al Qaim, Hit and Al Asad.

The main Strike Force base in Iraq is Camp Ramadi, but soldiers from the brigade combat team will operate out of several other installations in and around Ramadi, officials said.

Al Anbar experienced violent flare-ups in April and June that resulted in firefights involving Marines in Ramadi and Fallujah. A truce was negotiated in Fallujah after the intervention of a group of former Iraqi army officers, but critics say it amounted to handing the city over to insurgents using it as a base for strikes against coalition forces.

The Associated Press reported this week that U.S. land forces commander Army Lt. Gen. Thomas F. Metz said assaults on Ramadi and Fallujah, as well as Baghdad&#8217;s Sadr City suburb are likely in the next four months as the Iraqi election in January draws near.

Ramadi is one of the most dangerous places in Iraq to work. The 1st ID has sustained more than 500 casualties, including 50 fatalities, during its deployment, officials said. But people living in the smaller villages and in the desert are perceived as friendly by U.S. troops.

Al Anbar encompasses a variety of environments, from harsh, dry desert conditions to moist, fertile farmland near the Euphrates River and the massive lakes Habbaniyah and Thar-Thar. Marines patrol the waterways in small boats and search islands for weapons caches, officials said.

The lakes are tourist attractions for Iraqis, who swim and catch fish in them. But soldiers are not allowed to swim, especially in the Euphrates, which has a strong undertow, officials said.

The standard of living for Iraqis living in Ramadi appears to be good compared with other parts of the country. The city has electricity, running water, police and fire departments, hospitals and an ambulance service, schools and markets.

A significant increase in vehicles on the streets over the past year is evidence of increasing economic activity, soldiers said. The 1st ID has been involved in numerous civil affairs projects, most notably repairing Ramadi&#8217;s water system, which was inoperative when the unit arrived, officials said.

Agriculture is a major industry in Al Anbar Province, with many families breeding sheep or goats for their own sustenance. In downtown Ramadi, sheep are slaughtered in the streets and markets sell a variety of produce including melons, fruits such as dates, pomegranates.

The bases that Strike Force occupies vary from a featureless moonscape to the relatively pleasant palm groves at Camp Ramadi. Soldiers there eat the sugary dates that drop from the trees.

Summer temperatures in Al Anbar reach 115 degrees, cooler than the scorching temperatures of up to 138 degrees that Strike Force soldiers saw in Kuwait, where they stopped en route from South Korea.

Late October is the rainy season in the province when persistent, annoying drizzle turns Camp Ramadi, which is affected by groundwater from the Euphrates, into a mud pit, 1st ID soldiers said. In winter, the mercury drops to near freezing, making for some chilly patrols and observation posts.

But many local children do not seem to notice, wearing shorts and T-shirts year-round, the soldiers said.

All four services work there &#8212; Marines, Army, Air Force observers and Navy Seabees. The most visible landmarks near Camp Ramadi are the tall smokestacks of a glass factory that has provided glass ashtrays for some soldiers at the camp.

The base gets rocketed or mortared two to three times a week but the insurgents&#8217; accuracy is low. So far, only one mortar has done major damage, landing among a group of Seabees and killing six personnel a few months ago.

After two weeks of living at Camp Ramadi, Capt. Charles Romero, 37, of Fresno, Calif., is settling into his new home.

Sgt. Jaimee Torres, 24, of Puerto Rico and a 2nd Forward Support Battalion soldier who is living at a camp dubbed TQ, said arriving at the base was a sort of homecoming. He served there on one of two previous Iraq tours, he said.

There have many improvements at the camp, including provision of MWR facilities for every company based there, more air conditioning and better force protection, he said.

Torres said he has spent three of the last four years deployed: two previous tours to Iraq, one to Afghanistan and one to South Korea.

&#8220;Measure each day by doing something that makes your own life better here,&#8221; he said. &#8220;The same attention to detail that causes you to be focused on everything you do should be the same the last day as the first day. Nothing is routine. It is serious business every time you go out.&#8221;