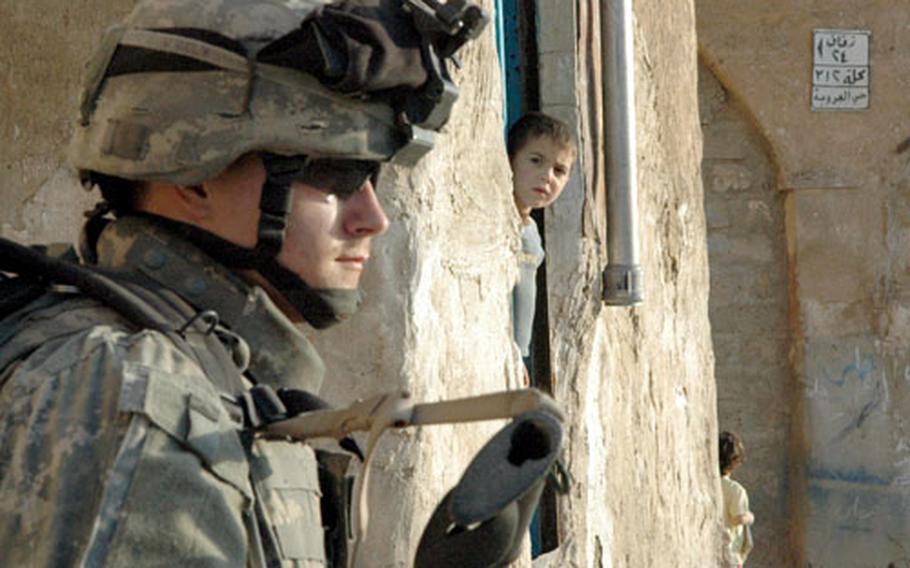 What surprised him wasn&#8217;t so much that Cpl. Antoine J. &#8220;Mack Ten&#8221; McKinzie had been killed in March of this year, said Bernard, a 25-year-old with the 4th Battalion, 27th Field Artillery Regiment. That is an unfortunate and tragic reality of being in the military during wartime.

What surprised Bernard, just a few weeks after crossing in from Kuwait, was how his fellow 4-27 comrade had been killed.

Right then, Bernard realized this was not the enemy that the Iron Brigade&#8217;s second-timers had seen during their first deployment in 2003 and 2004.

While every soldier&#8217;s story is different, returning 2nd BCT personnel like Bernard probably experienced the same kind of macabre wake-up call during this recently completed deployment.

Since they&#8217;d been gone, roadside bombs had become the main tool of a dangerous and largely unseen enemy. The battlefield had changed. And for those who had done this all before, the similarities and contrasts soon became apparent.

The brigade replaced the 3rd Infantry Division following the invasion in spring of 2003, leaving in the summer of 2004. That might as well have been a whole other war.

&#8220;The first deployment, it was more ambushes, a couple insurgents trying to get potshots in there and then taking off running,&#8221; said Staff Sgt. Joseph Smith, also of the 4-27.

But while the insurgent tactics changed, the brigade changed, too. Before this last deployment, soldiers trained in Germany to prepare themselves for those new realities on the ground.

And while serving as a reserve force in Kuwait, the training continued.

This time around, artillerymen such as Bernard and Smith found themselves doing more infantry style duties.

&#8220;Last time around, it was more of a ground war,&#8221; Bernard said. &#8220;Everyone was still doing their jobs, per se. This time around there was more of a mobile war. It seems like as we grew and adapted to our surroundings, the insurgents almost did the same thing.&#8221;

Bernard and Smith said they encountered more Iraqis who would tip off American forces this time, and there was more of an Iraqi presence in military and police operations.

While the insurgents had altered their tactics, and the brigade was fighting an unconventional enemy, Bernard said he also noticed better amenities for the troops during this second deployment.

But all those extra perks also stretched out the deployment in some ways, he said.

While the Iron Brigade had experienced a 120-day tour extension during the last deployment, and many spouses said this summer that they expected an extension this time as well, it didn&#8217;t happen, and most brigade soldiers were back in Baumholder, Germany, by November.