2nd BCT hopes to keep Ramadi from turning into another Fallujah 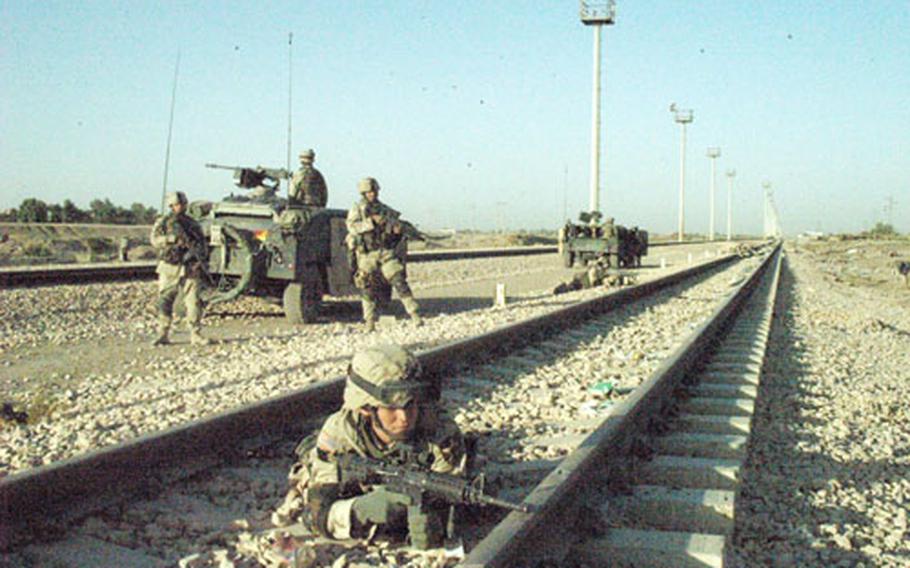 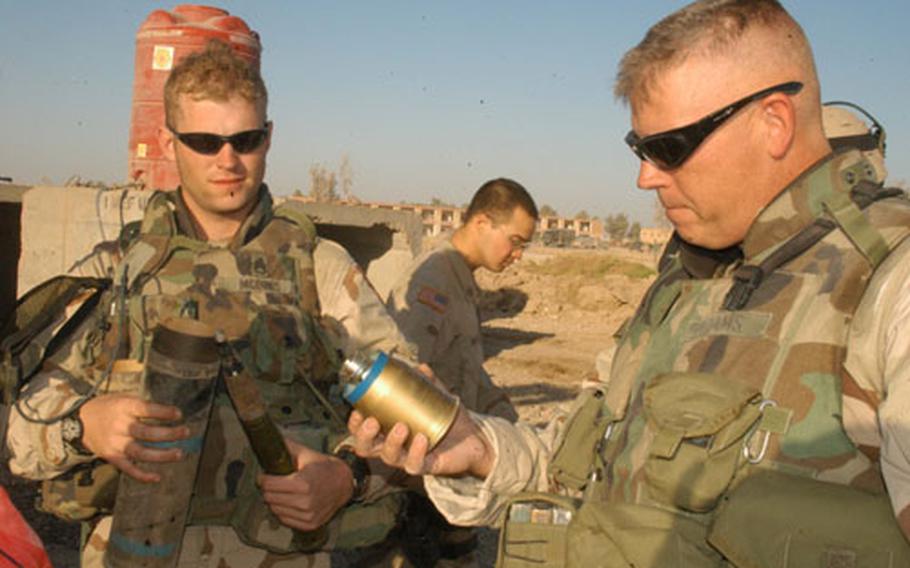 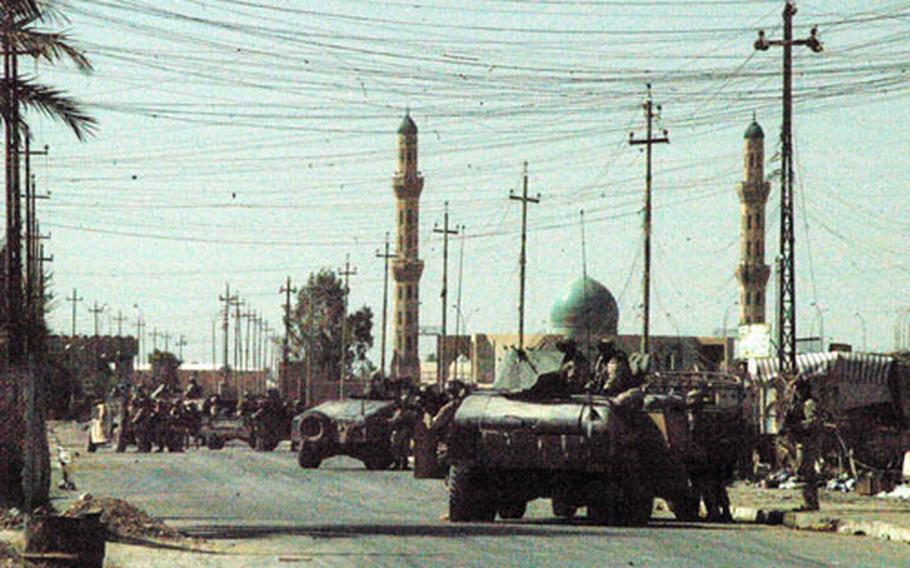 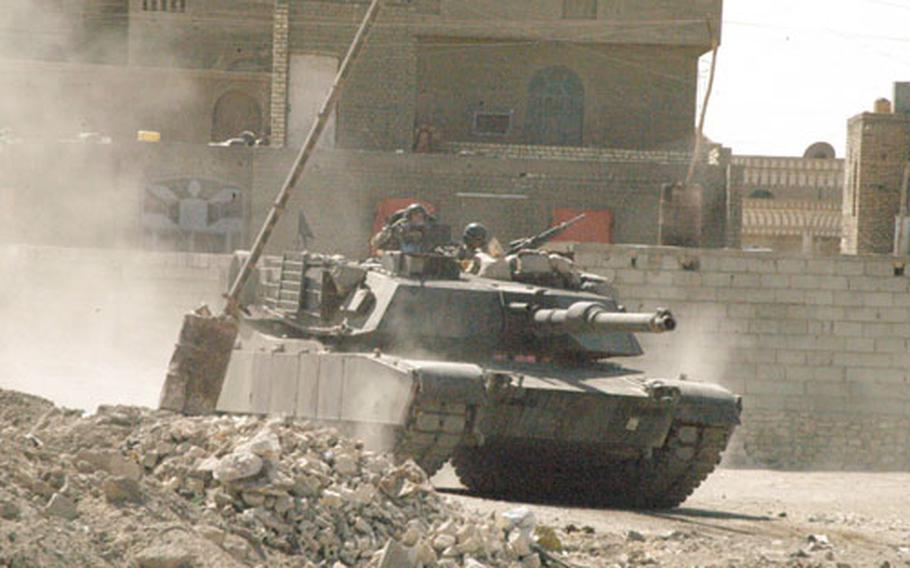 An M1A1 Abrams tank rolls through the streets of Ramadi, Iraq, during fighting with insurgents on Thursday. (Seth Robson / S&S)

RAMADI, Iraq &#8212; Dozens of M1A1 Abrams tanks, Bradley fighting vehicles, and armored Humvees took to the streets of Ramadi this week as soldiers patrolled neighborhoods, searching for weapons and insurgents.

The massive offensive was designed to root out insurgents attempting to turn Ramadi into another Fallujah, something the U.S. military is determined to prevent, said 1st Battalion, 506th Infantry Regiment commander Col. David Clark, whose unit was part of the operation.

Explosions and machine gun fire rocked the city throughout the day. But most blasts were controlled detonations set off by soldiers firing .50 caliber machine guns at roadside bombs, Clark said.

Most citizens stayed indoors during the operation. In the main street, where many buildings are pockmarked with bullet holes from earlier battles, shops were closed. The combat team reported one fatality during the operation, a Marine killed by a makeshift bomb.

The offensive was designed to finish off insurgents who had fought a bloody battle with Marines in Ramadi earlier in the week near the city&#8217;s largest sports stadium, Clark said.

Claims that insurgents already dominate Ramadi in the same way that they do Fallujah are not accurate, Clark said. But the insurgents are trying to establish themselves in the city, he said.

&#8220;There had been relatively heavy fighting in there for a day or two before. We moved in to try to get the city back under control, re-establish a presence and provide the protection to keep the government firmly in control.

Soldiers from the 1-506 found several roadside bombs on Thursday and detained two Iraqis dressed as police officers but lacking identification, he said. Soldiers from the 1-503 uncovered a weapons cache and fired at an Iraqi who failed to respond to warnings when he approached a checkpoint.

Staff Sgt. Calvin Drakeford, 40, a medic with 1-503&#8217;s Company D, spent a long, hot day waiting to rush across the battlefield to treat wounded soldiers. He was relieved that the call never came.

&#8220;I expected a lot of casualties. I knew we were coming into a city where we might have enemies unwilling to cooperate with us,&#8221; he said.

&#8220;And the explosions,&#8221; added fellow Company D medic, Pfc. Michael Boyd, 21, of Rex, Ga., who heard several large booms in the neighborhood during the night.

&#8220;I expected to hear that. I heard there was an 85 percent chance of people taking fire through here, but we are fairing pretty well,&#8221; he said.

Moments later another loud blast shook the street, sending a plume of gray smoke into the air in the next block.

Nearby, Company D soldier Pvt. Joshua Molt, 19, of Lake City, Fla., patrolled along a set of railway tracks that commanders thought insurgents might use to flee the city. The young soldier, fresh from basic training, enjoyed his first experience of a brigade level operation, and sounded relieved it was relatively quiet.

The 23-year-old Palau native was searching the roadside while other soldiers manned a traffic control point at a T-intersection in Ramadi when he spotted the cache under some cinderblocks.

Another Company D soldier, Staff Sgt. William McInnis, 25, of Baton Rouge, La., was surprised the insurgents did not put up more of a fight.

&#8220;We expected a lot more than what we got. The intel said they were going to stay and fight. We had one big explosion nearby but we never found out what it was. It was early in the morning and scared the piss out of all of us,&#8221; he said.

A Strike Force official said the mission drove the bulk of the insurgents out of the city.

&#8220;Our goal ... is to work hand-in-hand with our Iraqi counterparts to make this a safer area for Iraqis to live and work. Anti-coalition forces have entered and terrorized this city in recent weeks. They have caused a fair amount of fear with the local population. We wanted to ensure the citizens of Ramadi that Iraqi and coalition forces are in the city protecting them,&#8221; the official said.

&#8220;In addition to nabbing a few suspected fighters, we gathered intelligence that will help us in future operations and uncovered weapons caches that will help us keep illegal weapons off the street,&#8221; he said.