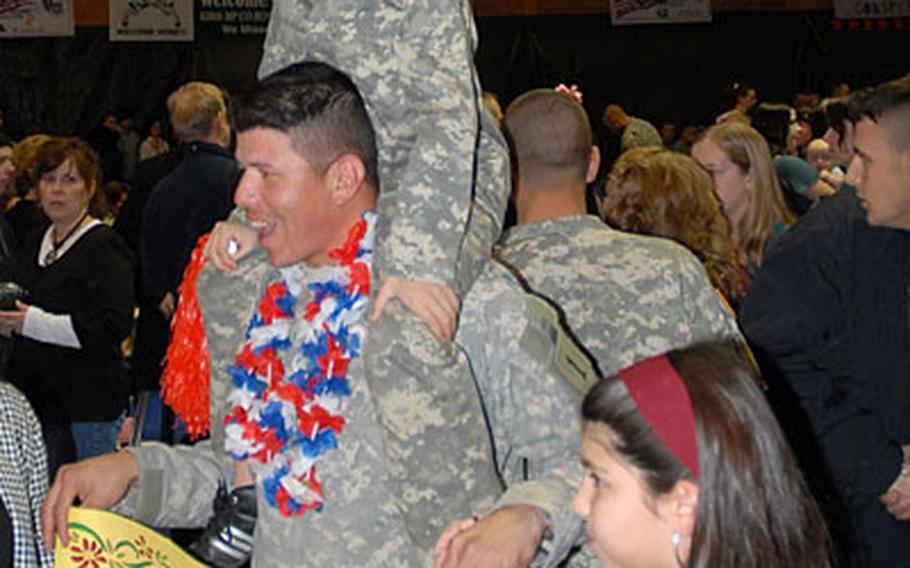 With his son, Jonathan, 7, on his shoulders, and his daughter, Deanna, 10, by his side, Staff Sgt. John Garcia, of Company A, 1st Battalion, 7th Field Artillery Regiment, was all smiles during a redeployment ceremony at Finney Fitness Facility on Conn Barracks in Schweinfurt, Germany. (Mark St.Clair / S&S)

As commander of the 2nd Brigade Combat Team&#8217;s rear detachment, Whittle and his staff have been overseeing the numerous redeployments of the past few weeks.

Along with the scores of soldiers from units such as 1st Battalion, 18th Infantry Regiment, the 1st Battalion, 7th Field Artillery and the 299th Forward Support Battalion, Tuesday&#8217;s group included the brigade&#8217;s commander, Col. J.B. Burton.

Marching at the head of a 270-man formation, Burton looked tired, but proud of the tough job he and his soldiers did.

&#8220;We had 15 months of hard fighting and 15 months of positive change everywhere Dagger Brigade was located,&#8221; Burton said shortly before marching in.

&#8220;[There is a] tremendous sense of accomplishment, but one that&#8217;s extremely fragile,&#8221; he said, speaking of volatile Baghdad and Ramadi, neighborhoods that his men recently left.

Asked how it felt to be home with his own family, Burton mentioned only his soldiers.

One of Tuesday&#8217;s many returnees was Capt. Stephen Polacek of the 299th. &#8220;It&#8217;s good to be home for the holidays this year for once,&#8221; while holding his 15-month-old daughter, Sydney, who was born days before he left for Iraq. Polacek actually was allowed to deploy late because his wife, Sarah, was due.

Another relieved soldier was Staff Sgt. Brahima Coulibaly, of 1-7&#8217;s Company A.

&#8220;Thank God that our nation produces soldiers like that,&#8221; Burton said, when asked about his soldiers and the heroism they displayed over the past 15 months.