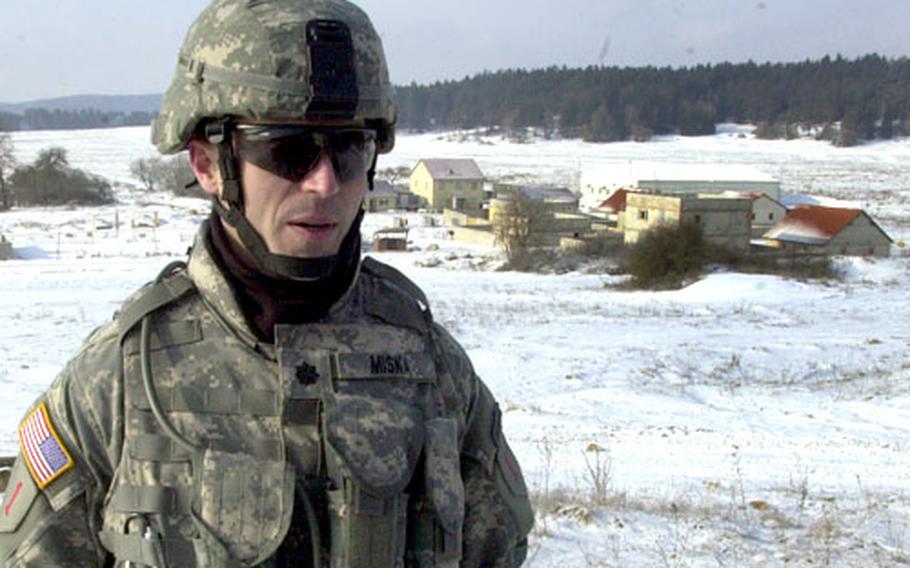 That ability was stressed during a three-week mission rehearsal exercise that ended Monday at Hohenfels.

The soldiers are heading back to their base at Schweinfurt this week after almost two months in the field. During the exercise, soldiers battled 1st Battalion, 4th Infantry Regiment soldiers acting as insurgents and interacted with hundreds of Germans playing Iraqi civilians.

&#8220;They did a good job giving us the type of challenges we will face in Iraq. It is all about trying to win over the populace and separate the insurgents,&#8221; Miske said.

The unit has not been informed exactly where it will go in Iraq. And although the unit&#8217;s leaders have been told when the unit will deploy, that information has not been made public, he said.

&#8220;We are going back to Schweinfurt to conduct after-operations recovery of our equipment and we will go on two weeks&#8217; block leave with our families in April. When we come back, we will prepare to deploy,&#8221; Miske said.

First Lt. Erik Sarson, 25, of Latrobe, Pa., who serves with 2nd Platoon, 1st Battalion, 77th Armored Regiment, said the highlight of the training for his unit was helping raid a Military Operations in Urban Terrain site.

Sarson, a veteran of the combat team&#8217;s last Iraq mission, said the training was realistic but that there are a lot of things in Iraq that cannot be duplicated in Germany.

&#8220;You can only have so many people driving on the roads here, whereas in Iraq you have traffic all the time, and you have to decide who is an enemy and who is friendly,&#8221; he said.

&#8220;Some days (during the mission rehearsal exercise), you wouldn&#8217;t get any enemy contact at all. We went a whole week before we got enemy contact. The same thing will happen downrange. You will think nothing&#8217;s going to happen and when you least expect that is when they hit you,&#8221; the Oak Harbor, Wash., native said.