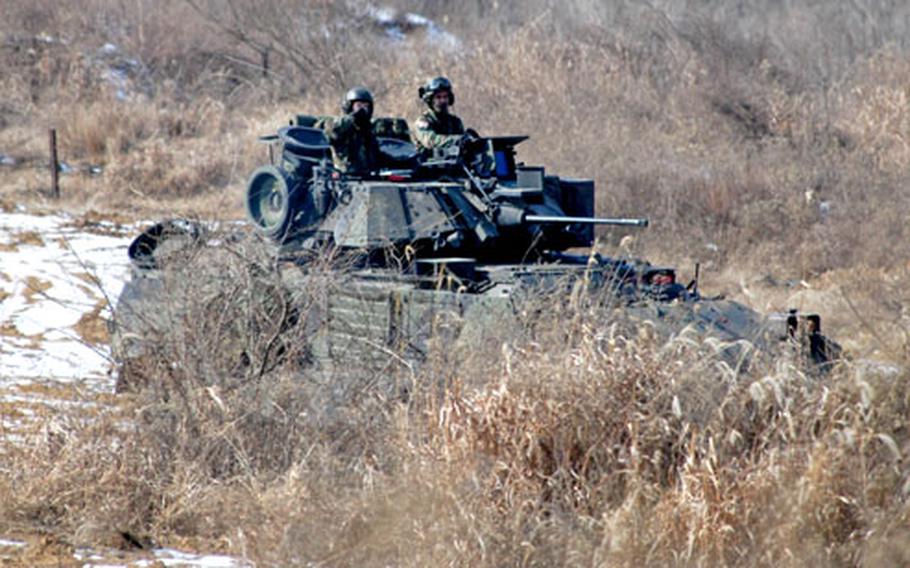 The force-on-force training, using blank ammunition and training lasers, was designed to test soldiers&#8217; skills when moving to contact the enemy, said Staff Sgt. Louis Terron, 40, of Hoboken, N.J, one of the 2-9 soldiers taking part.

During training Wednesday, in a rugged valley blanketed with snow and ice, Terron, 2-9&#8217;s 1st Platoon, D Company platoon sergeant, was part of a Blue (friendly) Force that consisted of four Bradley Fighting Vehicles and 28 personnel.

The D Company soldiers were taking on an &#8220;Op For&#8221; (Opposition Force) of soldiers from 2-9&#8217;s B Company. Terron said they were simulating an enemy equipped with two dug-in BMPs, or Soviet-era armored personnel carriers. The attack started when a D Company sniper team took up a position on a hilltop overlooking the valley. Once snipers spotted the enemy &#8220;BMPs&#8221; (actually a pair of Bradleys) the Blue Force called for indirect fire, simulated by an M-113 armored personnel carrier spraying smoke, around the Op For positions.

The indirect fire and smoke were intended to &#8220;shake up&#8221; the enemy before the attack came, Terron said. &#8220;Then we will use two sections to leap frog forward until we make contact and destroy them,&#8221; he added.

Another D Company soldier involved in the training, Pfc. Casey Belovsky, 21, of Lake Forest, Calif., carried an M-249 &#8220;saw gun&#8221; as he prepared to go into battle &#8220;Our objective is to go to the far side of that hill, kill any enemy dismounts we find and create an over-watch position so the Bradleys can move through,&#8221; he said.

&#8220;Right now, I am just thinking about getting up to that hill as fast as I can. Yesterday we went down the same route and took out the enemy scouts, so hopefully we will have something along the same lines,&#8221; he added.

There was keen rivalry between the Blue Force and Op For soldiers; whoever performed best during the training had bragging rights, Belovsky said.

Other Op For soldiers said they exposed themselves to the Blue Force troops and fired to give their positions away.

Cpl. Garret Bond, 23, of Camden N.J., was part of an Op For team in a defensive perimeter around a hill they were supposed to protect, he said.

The extreme cold at Rooster 8 was a challenge, but was not as bad as last winter in South Korea, he said: &#8220;Last winter over here, we had a real bad one where our tent flooded and all our gear got soaked.&#8221;

Troops training in the cold conditions make themselves warm any way they can, Bond said. &#8220;That way you can drive on and continue the mission. If you let the cold get to you, you are not going to be able to do what you are supposed to do,&#8221; said the former high school roller hockey player.