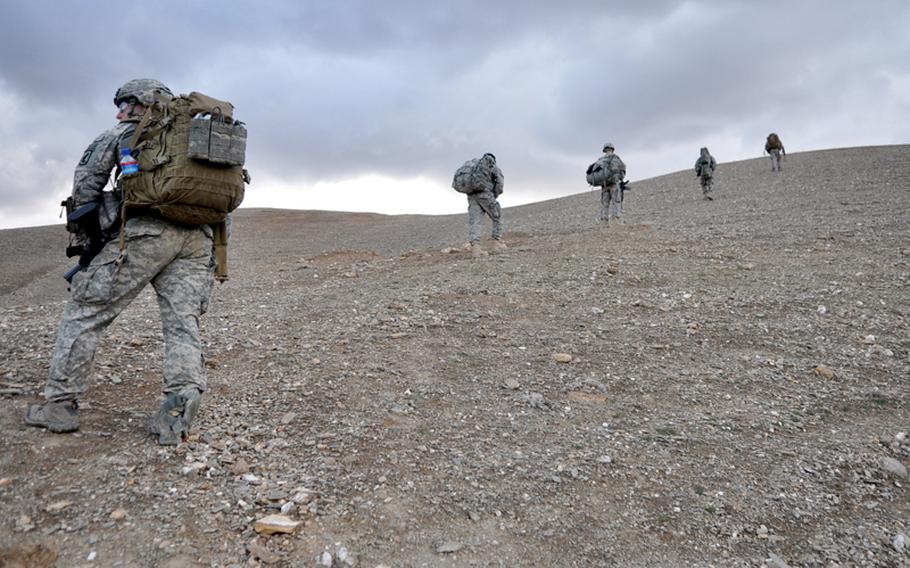 The 2nd Battalion, 503rd Infantry Regiment&rsquo;s third tour of Afghanistan was a blend of the familiar and unfamiliar.

To begin the rotation, the battalion returned to Kunar province, an area where &ldquo;The Rock&rdquo; was stationed in 2007-08.

&ldquo;We were able to go back to an area where a lot of our NCOs and other soldiers had been before,&rdquo; battalion commander Lt. Col. Bill Butler said.

Twenty-four soldiers from the battalion, along with a Marine and a sailor, were killed during that last 14-month rotation, which saw more than 1,000 contacts with enemy forces. The battalion emerged as one of the most decorated units since the Vietnam War, with one Medal of Honor recipient, one Distinguished Service Cross honoree, 27 soldiers earning Silver Stars and 90 awarded Bronze Star Medals with valor.

But this time, much of the battalion was stationed in different areas of Kunar because two other battalions shared a battle space that &ldquo;The Rock&rdquo; had held by itself in the previous rotation and partly because the basic rules of operating in Afghanistan have changed since 2008.

Coalition forces have moved away from hunting for isolated pockets of insurgents in the mountains in Kunar and Nuristan provinces and manning small, isolated outposts. Instead, troops spend more time trying to protect larger segments of the Afghan civilian population in the area&rsquo;s numerous river valleys.

That doesn&rsquo;t mean there wasn&rsquo;t fighting.

&ldquo;We were getting into firefights just about every day,&rdquo; Butler said. Sgt. Lucas T. Beachnaw was killed Jan. 13 in an exchange of fire, and Pvt. Nicholas S. Cook died March 7 during another exchange. About 70 other soldiers were injured during similar incidents, Butler said.

&ldquo;We were very fortunate in that we were able to accomplish a lot&rdquo; without suffering more casualties, he said.

Accomplishments included training and working with Afghan Border Police, expanding the road network, working with other U.S. agencies and non-governmental groups on projects such as demonstration farms, and mentoring local government and military leaders, Butler said.

Six months into the rotation, the battalion was ordered to move hundreds of miles to the southwest and join the rest of the 173rd Airborne Brigade Combat Team in Logar and Wardak provinces.

The brigade addressed the issue of moving the battalion into unfamiliar territory by mixing elements of 2-503 with its sister battalion, which deployed out of Vicenza, Italy. The 1st Battalion, 503rd Infantry Regiment, had been responsible for all of Wardak for six months and now took over responsibility for the southern part of the province as 2-503 moved to take responsibility over the north.

Butler said the battalion&rsquo;s general mission remained the same, but that there were obvious differences.

The local government in Wardak, located just south of the capital of Kabul, is much more effective than the one in Kunar, he said. The most prevalent danger to U.S. soldiers came from roadside bombs instead of direct combat.

Soldiers, helped by troops who already knew the terrain, adjusted quickly to the new conditions, he said.

&ldquo;Having Sky Soldiers on your right and left is always a good thing,&rdquo; Butler said. &ldquo;We knew them and how they operated, because we had trained with them already.&rdquo;