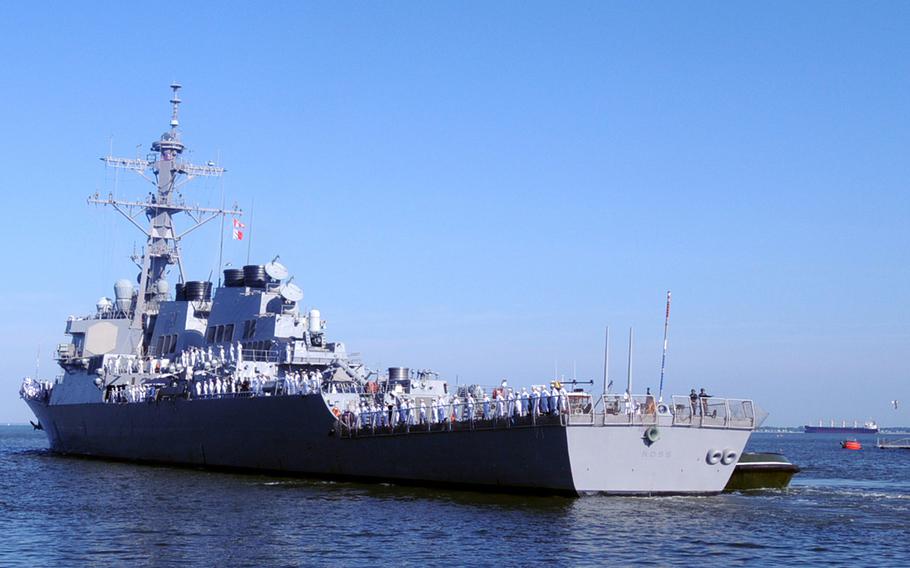 Sailors aboard USS Ross man the rails as they depart their Norfolk homeport. Ross is the second of four Arleigh Burke-class guided-missile destroyers to be forward deployed to Rota, Spain. (U.S. Navy)

NAPLES, Italy — The second of four U.S. Navy destroyers to be stationed in Europe as part of a ballistic missile defense shield arrived at its new home in southern Spain on Monday, the Navy said.

The USS Ross, an Arleigh-Burke-class destroyer with an advanced Aegis combat system for tracking and intercepting medium-range ballistic missiles, departed from Norfolk, Virginia, earlier this month for Rota, Spain. It joins the destroyer USS Donald Cook, which arrived in Rota in February. Plans call for two more destroyers, the USS Porter and USS Carney, to move to Rota next year from their homes in Norfolk and Mayport, Florida, respectively.

The four ships are the centerpiece of the missile shield, known as the European Phased Adaptive Approach, and make regular, four-month tours of the Mediterranean region. Other components of the shield include land-based Aegis interceptor batteries in Romania and Poland, radar in Turkey and a command center at the U.S. Air Force base in Ramstein, Germany.

The plan has caused a major rift with Russia, which says the shield is aimed against its own nuclear missile arsenal. The U.S. and its NATO allies insist the defense system is to meant to protect Europe from potentially hostile countries in the region, such as Iran.

Since Russia’s annexation of part of Ukraine in March, some in Congress have pushed for the military to move up its timeline for the land site in Poland. Current schedules call for the Romania site to be finished by the end of 2015 and for the Poland site to be installed a year later.

The destroyer detachment also increases the Navy presence in Europe as demand rises for U.S. warships. Baltic and Eastern European countries seek reassurances against an expansionist Russia, while flash points in the Mediterranean extend from Syria to North Africa.

The Cook visited the Black Sea on its first patrol in April, one of a string of U.S. warship visits intended to show U.S. accessibility to an important region for Russia, which operates a fleet out of Sevastopol on the Black Sea.

Arrival of the Ross and the three other destroyers will increase the U.S. base population of Rota, a former Cold War submarine base and logistics hub set inside a larger Spanish base on the Atlantic coast, near Cádiz.

The ships will add roughly 1,200 sailors and personnel, along with 1,800 family members, according to base officials.