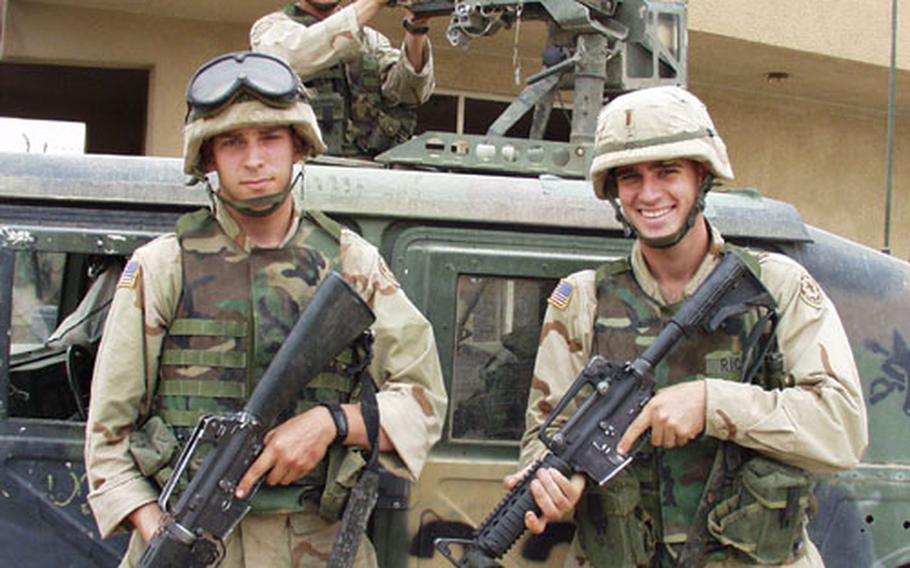 BAGHDAD, Iraq &#8212; When soldiers of the 2nd Armored Cavalry Regiment roll out on a night patrol, they embrace the darkness.

Humvee lights stay black as drivers cruise down streets in stealthy columns. Soldiers use night vision goggles to see, and keep a yellow lens on their flashlights to read maps.

Schumacher&#8217;s troop &#8212; roughly the size of an infantry company &#8212; needs every edge. In its section of northeast Baghdad called Thawra, which means &#8220;revolution&#8221; in Arabic, 500,000 people live in tightly packed neighborhoods. Most are Shiite Muslims and the rest are Sunni.

At a heavily fortified bunker in their zone, soldiers eat dinner in the dark. They chew the fat around the glow of cigarette tips.

The bunker used to be one of former Iraqi leader Saddam Hussein&#8217;s command-and-control centers, Schumacher said. Soldiers at the bunker are guarding a sizable container of cobalt that the U.S. military fears could be used for chemical weapons.

A month after Fox Troop arrived in Thawra, which used to be called Saddam City, six of its vehicles were ambushed as they moved in to secure the bunker.

One soldier, Staff Sgt. Donovan Knight, was shot in the hand. The others escaped.

Last week, somebody in an ambulance dumped four bodies on the street in Fox Troop&#8217;s zone, Schumacher said. The men had been assassinated.

Soldiers are constantly re-evaluating their defensive positions at the bunker, which looks out on a busy Thawra street. Drive-by shooters have sprayed the bunker. Once, someone shot a rocket-propelled grenade that hit the side of the building. No one was injured in those attacks.

An hour after nightfall Wednesday, Fox Troop&#8217;s patrol started quickly when somebody shot off two flares over a mosque not far from the bunker. Then some tracer rounds lit the sky.

With the help of one of the regiment&#8217;s UH-60 Black Hawks flying surveillance overhead, the patrol moved on the mosque area in a pincer movement. They didn&#8217;t find anyone with weapons, so they regrouped at the bunker.

After 11 p.m. &#8212; curfew hour &#8212; the patrol began again. As three Humvees crawled along a darkened street, an orange-and-yellow Volkswagen Passat screeched over a median in front of Schumacher&#8217;s Humvee, nearly colliding with it.

The driver, in the traditional white robe many Muslims wear, apparently was drunk. He fell to the ground as soon as soldiers opened his car door. They handcuffed him and put him into a small room in the bunker they call &#8220;the drunk tank.&#8221; A soldier drove the Passat back to the bunker.

After running a drill to secure the area in case of an attack, the unit called it a night. Tomorrow, the soldiers figured, they&#8217;d likely face another round of drunks, or assassins, or carjackers, or outlaw gunmen.