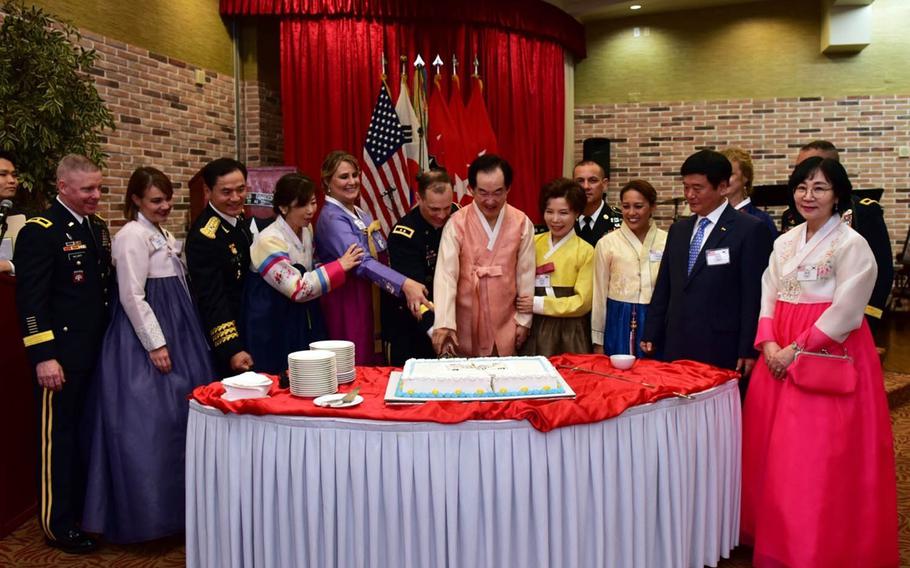 PYEONGTAEK, South Korea — The 2nd Infantry Division held its last Chuseok dinner Thursday in the northern city of Uijeongbu — a final night of thanks before the headquarters and its soldiers relocate 60 miles south to Camp Humphreys later this year.

Chuseok is a three-day Thanksgiving-like celebration in which Korean families trek to their ancestral homes to visit relatives and enjoy traditional foods and games.

“We are here to celebrate Chuseok... to understand the culture of our hosts; we are also celebrating our time as guests in Uijeongbu, as this is our final event that we will host at Camp Red Cloud,” said 2ID’s commander, Maj. Gen. Scott McKean, according to an audio recording of the event provided by the Army.

Instead of returning to their roots, Camp Red Cloud soldiers will soon pack up and leave an installation that’s hosted U.S servicemembers since the Korean War. The 2ID museum, a fixture at the base, boxed up its artifacts last week, and Camp Red Cloud’s old stone brick chapel will be decommissioned next month.

The handover of Camp Red Cloud — which lies between Seoul and the Demilitarized Zone — will fulfill a major part of the often-delayed 2004 agreement between Washington and Seoul to move the bulk of U.S. forces to sprawling Humphreys in Pyeongtaek.

Two Korean war veterans were on hand for Thursday’s Chuseok feast, during which Indianhead soldiers broke bread with their Korean hosts.

Uijeongbu Mayor Ahn Byung Yong said 2ID has exemplified what it means to be in the “blood-forged alliance.”

“It is sad that 2ID will be relocated to Pyeongtaek, but please remember that citizens of Uijeongbu, no matter where 2ID soldiers are in Korea, will always bring the kindness and happiness that we built together,” he said in the recording.