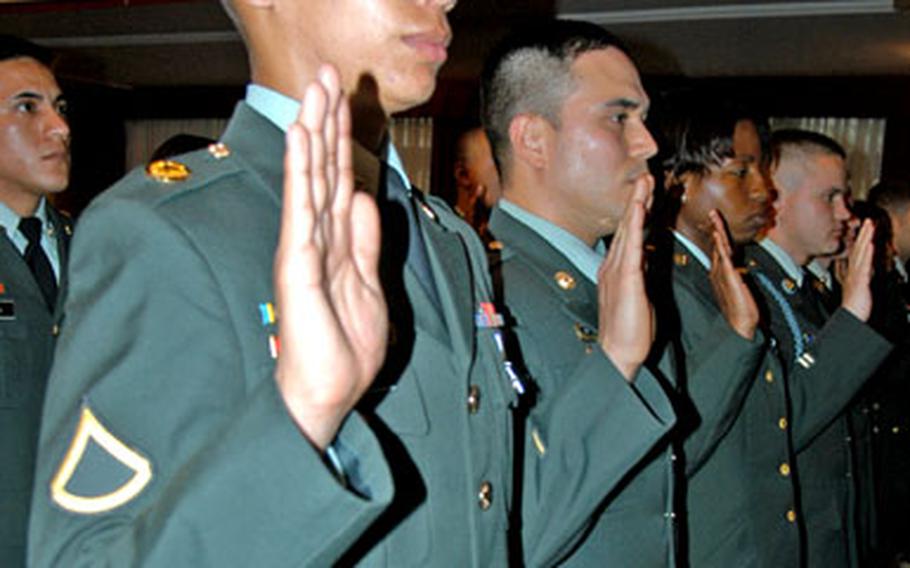 Spc. Michal Balasinowicz, left, shows his friends his certificate of U.S. citizenship after a naturalization ceremony Wednesday in Germany. Balasinowicz, a Polish immigrant, was among 28 servicemembers naturalized during the event. (Marni McEntee / S&S) 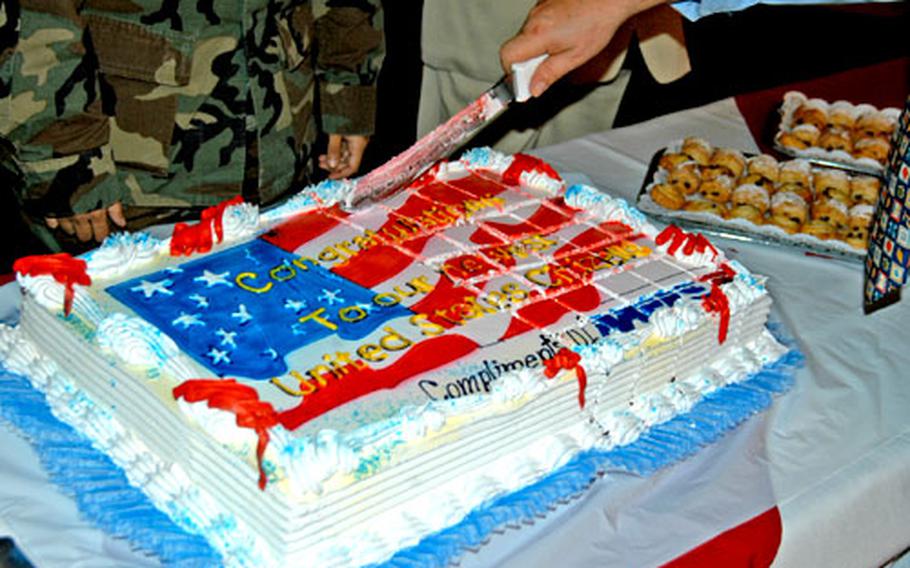 A cake congratulating 28 newly-naturalized U.S. citizens, all servicemembers, is cut Wednesday after a ceremony in Vogelweh, Germany. (Marni McEntee / S&S)

VOGELWEH, Germany &#8212; In one of the first naturalization ceremonies overseas, 28 servicemembers became U.S. citizens Wednesday after raising their right hands and pledging allegiance to their adopted country.

Among them were immigrants from around the globe &#8212; Peru, Poland, Ukraine, South Korea, Bangladesh and Germany. Some joined the U.S. military years ago. Many were relative newcomers to this country and to its armed services.

All solidified their commitment to the United States by becoming full-fledged citizens.

&#8220;I was downrange and fighting, and now I feel like I did something for my country. Everything I did, I did for my country and the Army,&#8221; he said.

The Kaiserslautern event is the third overseas military naturalization ceremony held for servicemembers.

Last November, President Bush signed the National Defense Authorization Act for fiscal 2004, which amended portions of the Immigration and Nationality section to allow for overseas military naturalization ceremonies. Before Oct. 1, military members could only naturalize while in the United States.

U.S. Citizenship and Immigration Services Director Eduardo Aguirre Jr. presided over the two other overseas ceremonies, naturalizing 17 soldiers in Afghanistan and 34 more in Iraq, before heading the event in Vogelweh.

Pfc. Jorge Latorre, 22, dreamed of coming to the United States from his native Peru since he was a child. But he didn&#8217;t join his father in Boston until 2002. The next year, he joined the Army and now is a member of 1st Battalion, 1st Cavalry Regiment of the 1st Armored Division from B&#252;dingen, Germany.

Spc. Winnie Moore, 30, of Trinidad and Tobago, has been in the United States for 18 years. She belongs to the 54th Engineer Battalion based in Bamberg, Germany, and recently returned from duty at several bases in Iraq.