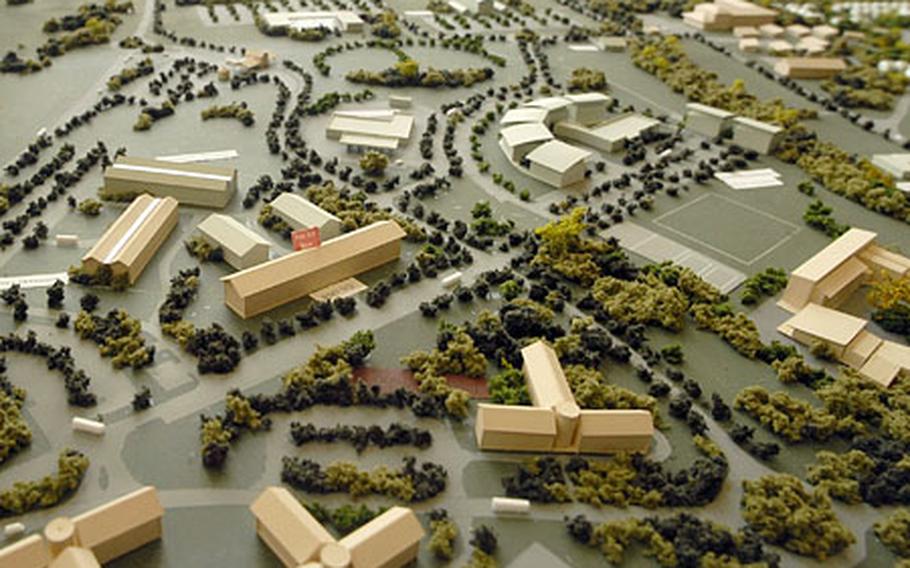 In this photo from May, a model located in the new billeting at Spangdahlem Air Base, Germany, shows a portion of the ongoing construction. (Ben Bloker / S&S)

SPANGDAHLEM AIR BASE, Germany &#8212; In the U.S. military&#8217;s era of transformation in Europe, this base is going through its biggest change in history.

It is a multimillion dollar makeover for a base nearly as old as the Air Force itself.

While some bases have closed and more are set to close across Germany, the amount of ongoing and planned construction is proof that Spangdahlem will remain one of the military&#8217;s most important bases on the continent.

Those projects and others will add to the recently built passenger terminal, club and banquet hall, runway and parking lot for cargo planes.

The Air Force hopes to complete the construction by 2015.

About 14,000 Defense Department and German employees and active-duty airmen work at the base in Germany&#8217;s Eifel region, said Iris Reiff, a base spokeswoman.

To make room for the extra buildings, the German government acquired 133 acres earlier this year for the base. The extra land will give the base enough space for the new exchange, commissary, fitness center and housing.

Construction crews already have begun tearing down old, stairwell apartments to build the new homes that will take on a more German look. Unlike most Air Force housing units, the new Spangdahlem homes won&#8217;t be painted the same tan and brown.

The housing area will be built to look like typical German neighborhoods in the area and will be named after German towns. The base hamlets also will have volunteer &#8220;mayors&#8221; to address housing issues, St&#252;rmer said.

Spangdahlem emerged as one of the Air Force&#8217;s most important bases in Europe after the closure of Rhein-Main Air Base in 2005. When the Frankfurt base closed, the Air Force shifted cargo flights to Ramstein and Spangdahlem air bases.

Since the base was built in 1953, Spangdahlem has served mostly as a home for reconnaissance and fighter aircraft. It now has an A-10 squadron and pair of F-16 squadrons serving under the 52nd Fighter Wing.

With most of the airfield improvements complete, much of the new construction is geared toward improving the quality of life of airmen and their families. The new gas station and shoppette will include a car care center, car wash and a Popeye&#8217;s restaurant. There also are plans to build a Red Cross center, chapel, teen center and a second base gate.