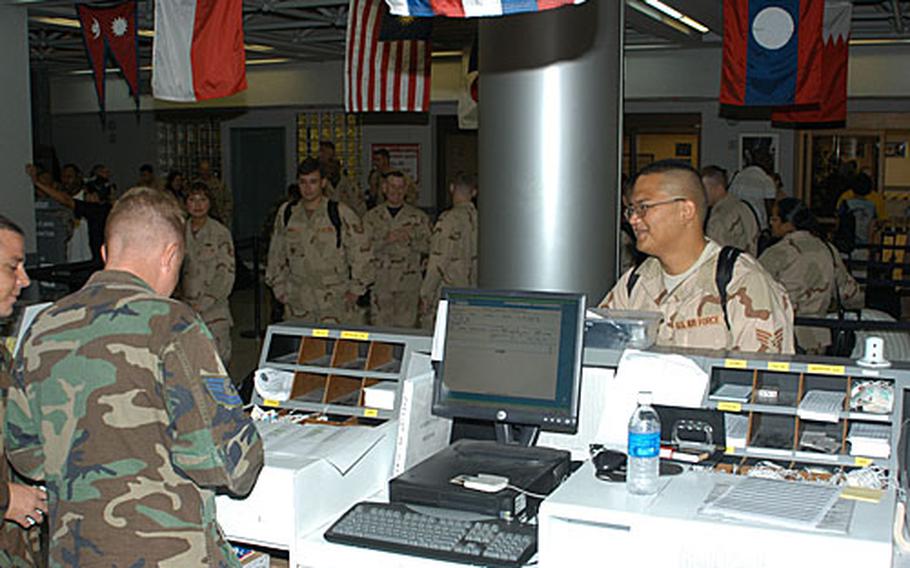 Senior Airman Ralph Hayashida (cq), 24, gets checked into a charter flight at Kadena Air Base&#39;s main terminal. Hayashida was one of about 250 officers and airmen deploying on Saturday to various places in the Middle East. (Will Morris / S&S)

On Saturday, about 250 Air Force personnel boarded a plane on Okinawa for bases across the Middle East.

The officers and airmen departed the island to support the ongoing air expeditionary force deployments for the Central Command Area of operations, Air Force officials said.

One airman, Master Sgt. Robinson Joseph, 38, stationed at Kadena, said he has mixed feelings about deploying. He works in supply and is bound for Qatar. It is his first time being temporarily assigned to the desert and his wife is carrying their second child, due in less than two months.

His wife, Leenette, 36, said she realizes that her husband is obligated to go.

Master Sgt. Jeff Cox, 42, stationed at Kadena, is going on his fifth deployment. His wife, Patrice Cox, 39, said she never gets used to her husband being gone, but this deployment will be better than others because two of her three children are now teenagers.

Saturday&#8217;s deployment was the first of two, the next fly-out being larger. The deployments are set to last between 120 and 179 days, according to Air Force officials.

Airman 1st Class Nathan Baxter, 22, an aviation and ground fuels technician from Yokota Air base, was part of a four-man team that left to central Iraq. He said he wasn&#8217;t afraid.

For those who were a little more apprehensive about leaving loved ones behind, Maj. Kathy Goforth, commanding officer of the 18th Munitions Squadron, offered this advice:

In their own wordsAirmen 1st Class David Clement and Matthew Varga attended boot camp and supply school together and are both currently stationed at Kadena Air Base. On Saturday, when their plane landed in Qatar, they each were deployed for the first time, together.

The airmen and their wives shared their thoughts Saturday while waiting to deploy.