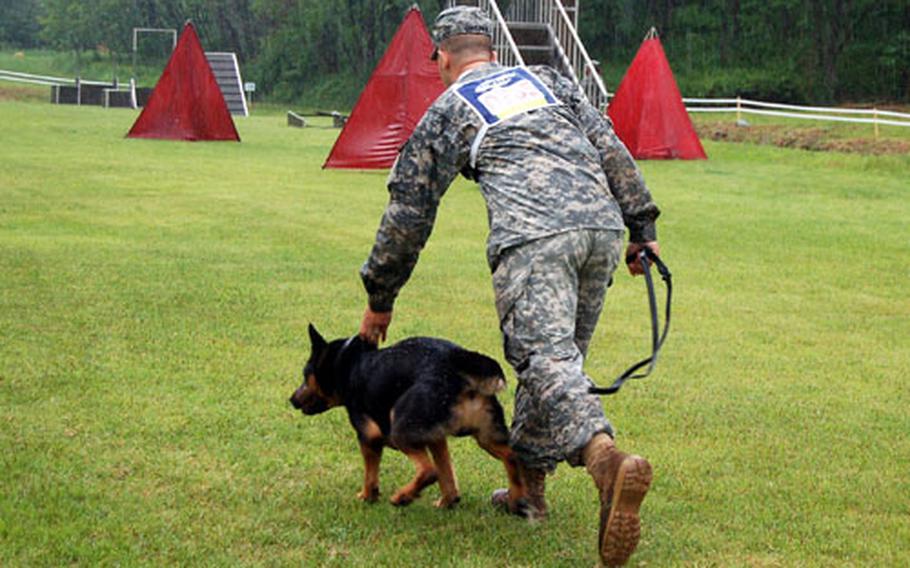 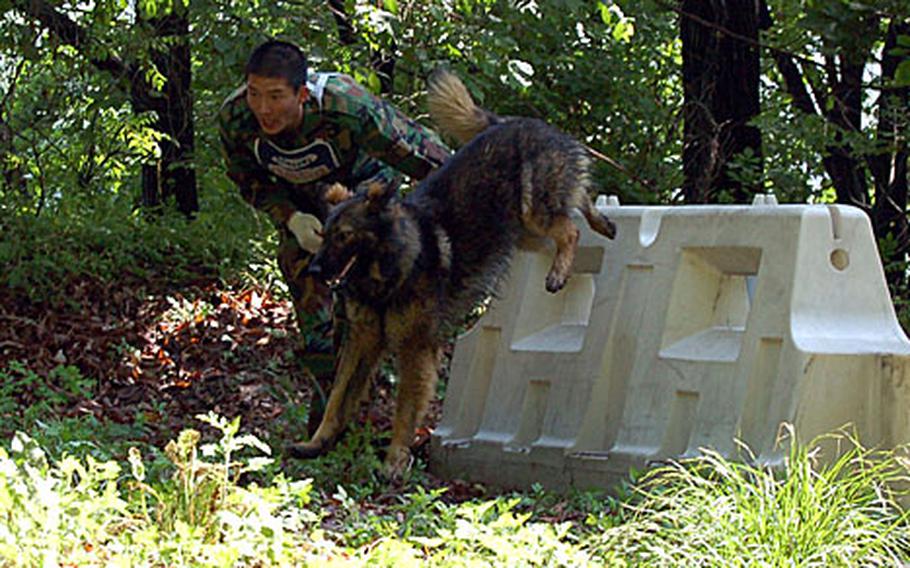 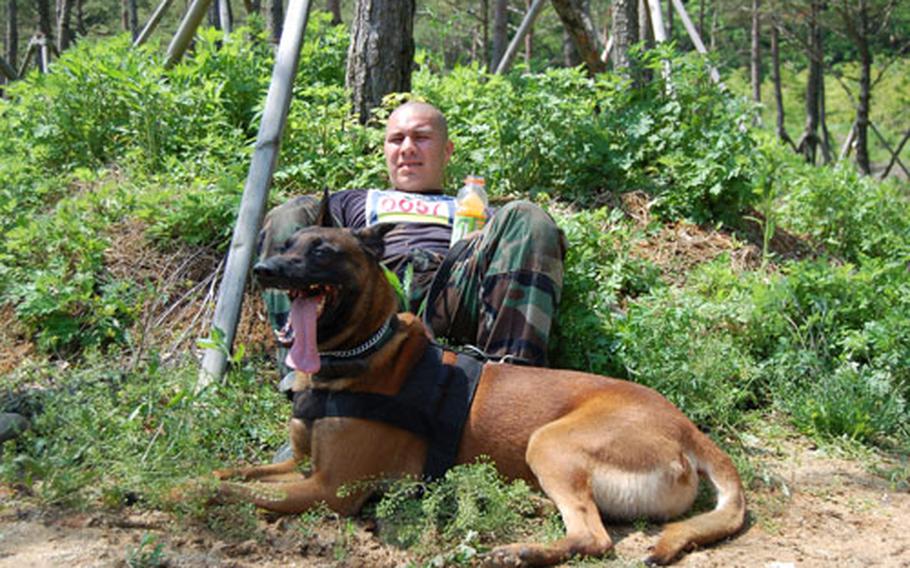 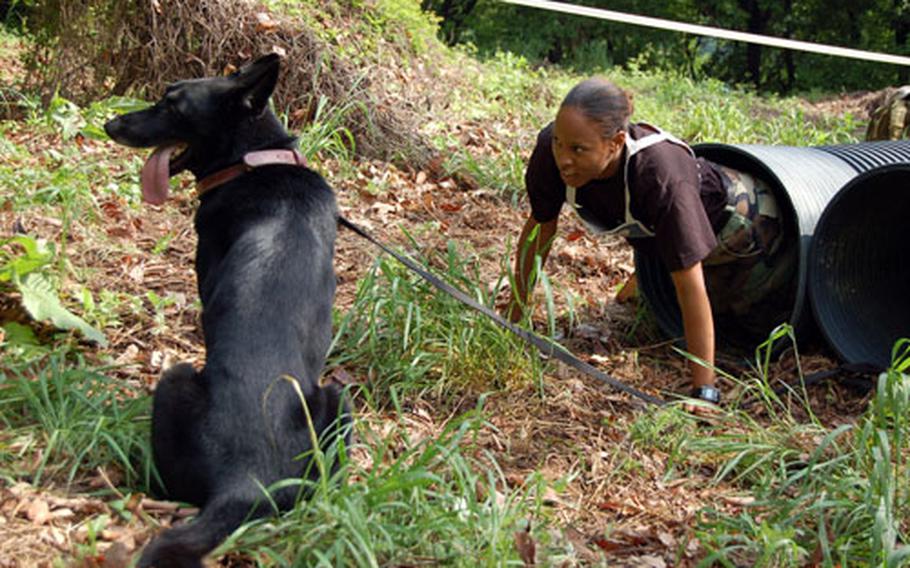 Betty, a German Shepherd, waits for her handler, Air Force Staff Sgt. Nazriah Green, to emerge from one of the obstacles on the fitness and endurance course. (Jimmy Norris / S&S) 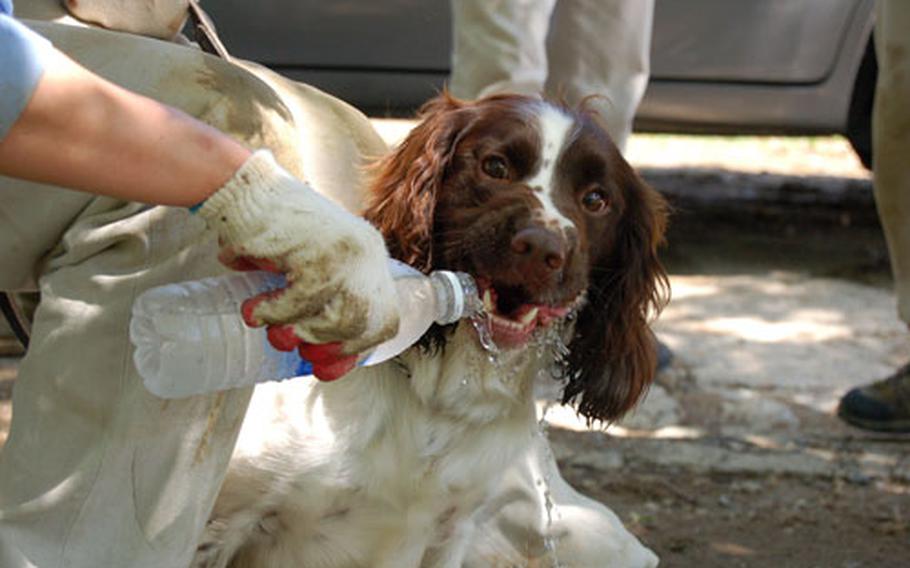 YONGIN, South Korea &#8212; As Argo bounded across the endurance course finish line, he was moving at high speed.

He&#8217;d just completed a mile-and-a-half course of steep grades, dense foliage and various obstacles. When he wasn&#8217;t slogging through mud on the rain-soaked trail, he was hurdling barricades or belly-crawling through tunnels.

Trailing behind him was his slightly winded partner, military policeman Sgt. Christopher Jasper. The two had pushed themselves through the course in about 13 minutes.

Though no one could tell by the finish, Argo, a 7-year-old German shepherd, was injured. After soaking his paws in mud created by the previous day&#8217;s rain, he&#8217;d hit the dry downhill cement, slipped, and tore a pad.

&#8220;He was moving at full stride as he hit the finish line,&#8221; said veterinarian Capt. Nic Cabano after applying a styptic powder to numb the wound. &#8220;No one could tell he was hurt until his handler did the post-run check. That shows how good the handlers are.&#8221; Thursday&#8217;s fitness and endurance course was the final event in the 4th annual USFK Military Working Dog Competition, where for three days the bond between handler and working dog was tested. Twenty-three dog-handler teams from the U.S. Army, U.S. Air Force, South Korean air force and Samsung Search and Rescue competed in numerous events.

On Wednesday afternoon, rain-soaked handlers sent their dogs into attack mode against military police who wore specially designed bite suits &#8212; then tried to call the charging canines off at the last second during the controlled-aggression event.

Many attempts were unsuccessful, putting some decoys on the receiving end of jaws capable of breaking bone.

Officials at the event said the heavy rain, and the presence of multiple dogs each getting a turn to attack, may have contributed to some handlers&#8217; inability to stop the dogs on the first try, but it&#8217;s this kind of event that reinforces their training.

On Tuesday teams searched for explosives and drugs.

While U.S. military units usually train with real drugs, and explosive samples, this competition used towels that had been wrapped around contraband items until the odor was absorbed because it was held at a civilian venue.

The event ended Friday with an awards ceremony and canine demonstration.

While Samsung, which hosted the event at its kennel and training area, won two of the top categories in the event &#8212; Top Dog and Best Kennel Team &#8212; other awards were more evenly dispersed among the competitors (see box at right).

Baxter said winning the events came down to a combination of the abilities of both the dogs and the handlers.

Successful competitors throughout the comptetition echoed his sentiments.