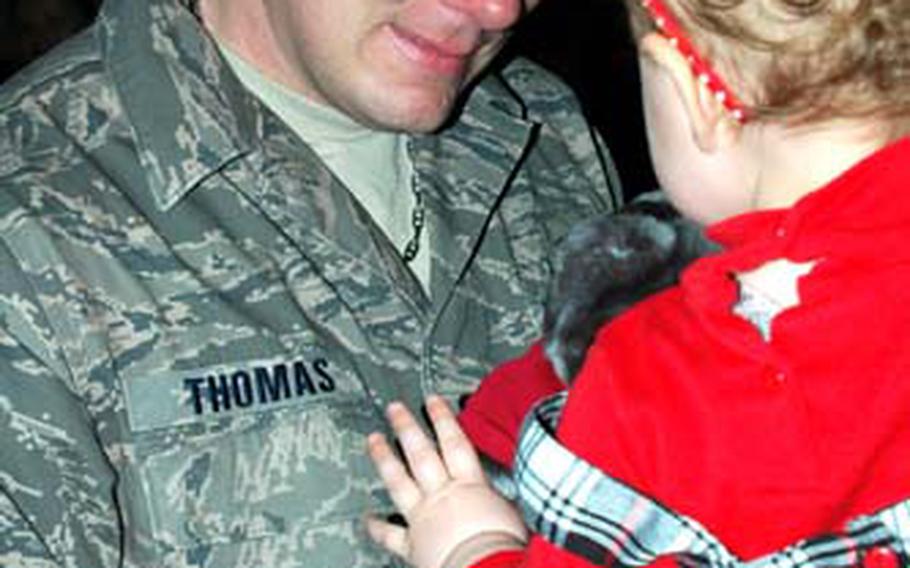 The returning airmen, assigned to the 36th Airlift Squadron and the 374th Maintenance Group, were scheduled to arrive between 4:30 and 6:30 p.m. Most family members were optimistic about the arrival time and had filled the 36th&#8217;s Heritage Room by 4:15 p.m.

As time passed, news trickled in &#8212; from "the plane has landed" to "they&#8217;ve cleared customs." Finally, after one last delay when the plane had to be towed across the flight line to avoid stirring up ash from Mount Asama&#8217;s recent eruption, the moment arrived.

"This is awesome," said Airman 1st Class Justin Cox, returning from his first deployment. "It&#8217;s good to be finally home."

His wife, Katherine Cox, said that in addition to missing the holidays Justin&#8217;s deployment also meant he missed their anniversary and both of their birthdays.

"It was an adjustment," she said.

They stayed in touch as often as they could on the phone and through e-mail, she added.

It was the second deployment for Ashley Silva&#8217;s husband, Capt. Sean Silva, but it was their first deployment during the holidays.

She said the time apart was made easier because she was able to visit with her family in California.

"This deployment, we e-mailed a lot more than we talked on the phone," she said.

Being able to talk via webcam every week was "really awesome," said Chandar Thomas, the wife of Staff Sgt. Justin Thomas.

Her husband said the webcam made the time go faster and allowed him to watch his 1-year-old daughter, Audrey, grow.

"When I left, she was like a tripod, just dragging herself around the room," he said. "Now she&#8217;s starting to walk and talk."

The camera also allowed Audrey to share her affection for her father.

On their seventh deployment, Thomas said having her daughter with her this time made it easier mentally. She had something else to focus on, she explained, but nevertheless, she&#8217;s glad that her husband is home.

"It&#8217;s great to be back," Justin Thomas said as he played with his daughter. "I missed way too much being gone."