21st Theater Support Command has a lot on its plate 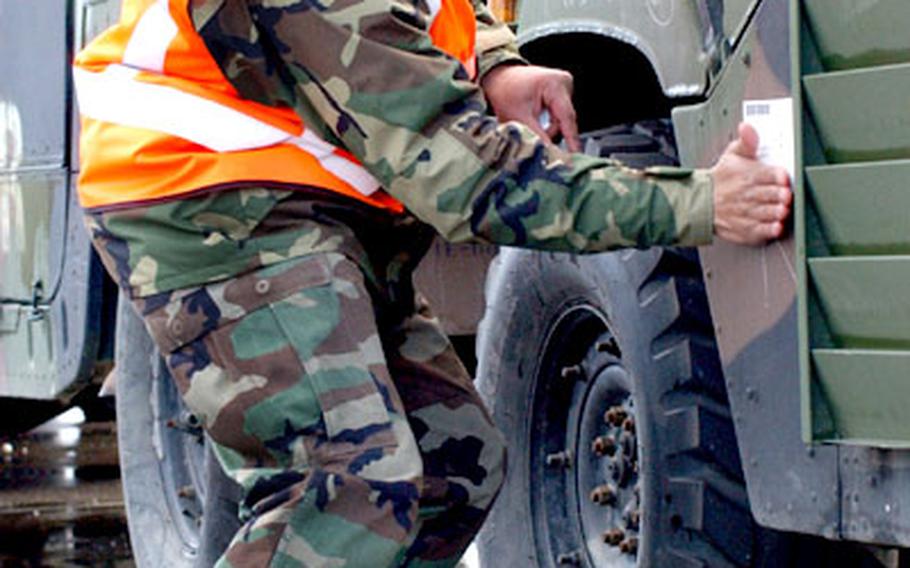 A 21st Theater Support Command soldier labels a Humvee during deployments earlier this year. The command is supporting the 1st Infantry Division deployment to Iraq and 1st Armored Division’s return to Germany in the coming months. (Courtesy of U.S. Army)

KAISERSLAUTERN, Germany &#8212; Troops at the 21st Theater Support Command are gearing up to deploy the 1st Infantry Division to Iraq and return the 1st Armored Division to bases in Europe.

Meanwhile, general support missions, such as delivering mail and wrenching major repairs on Army equipment, do not stop, Reeves said.

Soldiers move equipment to rail yards near their bases and barge sites along the Rhine River. From there, the gear is sent to deep-water ports in the Netherlands for shipment to Kuwait.

While this happens, thousands of tanks, trucks and equipment from &#8220;Old Ironsides&#8221; will be returning from Iraq to bases in Germany, along the same route in reverse.

Teams, already deployed downrange, are checking on 1st AD&#8217;s equipment to assess damage and order repair parts prior to the gear&#8217;s return, Reeves said. Some damaged equipment may go straight from the port to major repair shops, rather than to home stations, he said.

Planning for the upcoming missions began as early as June, Reeves said. But in September, the command learned it would also deploy 30 percent of its own force, he said. That, coupled with Army plans to keep soldiers returning from Iraq from working in the first 45 days, forces planners to look to civilian contractors and rear detachment soldiers for manpower.

In charge of the mission is the 21st TSC commander, Maj. Gen. Bernie Williams, who carries a wealth of logistics experience from previous deployments to Saudi Arabia, Somalia and Bosnia and Herzegovina. While supporting USAREUR movements is central to his everyday job, deploying his own troops to combat is first on his mind.

In recent weeks, deploying soldiers trained in Grafenw&#246;hr to defend themselves from attacks in Iraq, Williams said.

Based on lessons learned from two trucking companies that recently returned from Iraq, Williams insisted that soldiers deploy with gun trucks, even though some units are not assigned that equipment, he said.

All of Williams&#8217; soldiers should be trained by Christmas, followed by mandatory leave during the holidays where troops &#8220;will not be burdened by soldierly tasks,&#8221; he said.

Williams runs the mission from an operations center on Panzer Casern, one of several logistics bases clustered in the woods east of Kaiserslautern. Daily video teleconferences keep the command in touch with deploying units and movement officers at ports and rail sites.

Several planners have recent experience to draw upon. Last winter they shipped out most of V Corps to Kuwait, followed by the movement of an entire armor division. Planning staff learned lessons from those movements that helped them prepare for the upcoming missions, said 1st Lt. Jason Wells, 26, of Greenfield, Ind.

One of the planners&#8217; greatest tools is the &#8220;horse blanket,&#8221; a multicolored planning matrix that identifies rail sites, ports and unit locations. Initial plans begin with guesswork. As units update information, the plan emerges into a time line, Wells said.

About 1,000 troops from the 21st Theater Support Command are deploying to the Middle East in support of Operation Iraqi Freedom: