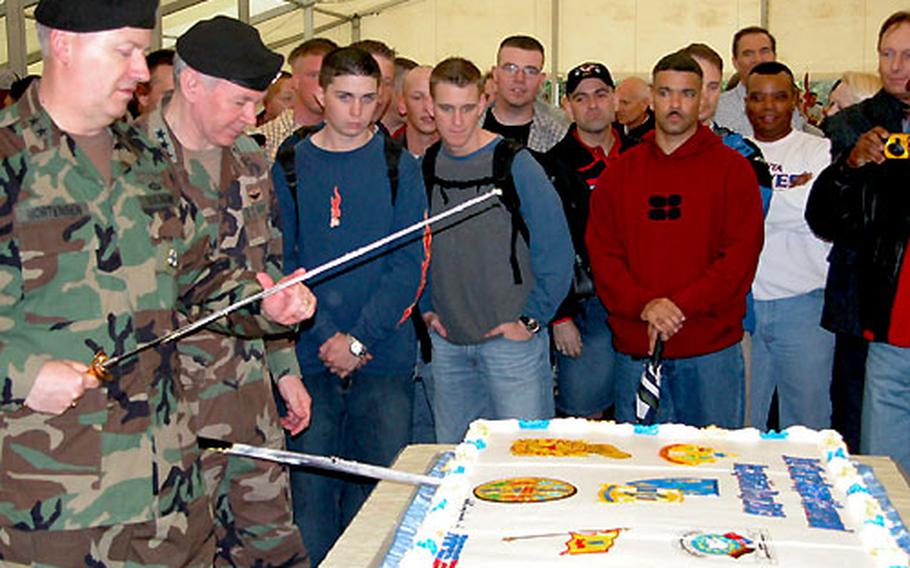 Maj. Gen. William E. Mortensen signs a ball for 2nd Lts. Jeremy Patten and Stacy Gervelis. Patten and Gervelis, members of the 529th Military Police Company, served with the 21st Theater Support Command in Antwerp, Belgium. The 21st TSC on Thursday celebrated its Army Superior Unit Award at Rhein Ordnance Barracks in Kaiserslautern, Germany. Patten and Gervelis said their unit took the ball with them on their mission as a reminder to not "drop the ball." (Charlie Coon / S&S)

KAISERSLAUTERN, Germany &#8212; Some jobs don&#8217;t get glory but they eventually get noticed.

The 21st Theater Support Command, a far-flung group of units that came together to help carry out Operation Enduring Freedom, was presented Thursday with the Army Superior Unit Award.

The award is the highest a unit can be given during peacetime.

The group was honored for getting people, supplies and anything else to where it was needed from May 2001 to May 2002 and doing it at a superior level as decided by the secretary of the Army.

Thursday&#8217;s picnic at Rhein Ordnance Barracks was also billed as a welcome-back party for those deployed for Operation Iraqi Freedom.

But not everyone from 21st TSC is back; some are still on the job in Iraq, Kuwait and Romania.

Sgt. 1st Class Vincent E. Williams, a 39-year-old from Washington, and his Logistics G-4 Unit had recently come back from Turkey. His top priority while there, Williams said, was to see that his command stayed safe.

His second priority was to get food, fuel and ammunition to those on the front lines.

About 1,000 of the 7,000 members of the 21st TSC were able to make Thursday&#8217;s party. There was a tent big enough for all of them, which was a good thing. Rain canceled the softball games and other outdoor plans.

After Mortensen and Lt. Gen. Michael Dodson, deputy commander of U.S. Army Europe, finished their speeches to the troops, a banner signifying the award was attached to the 21st TSC&#8217;s flag.

Trays of chow were put out &#8212; dogs and burgers, beans and salad, cold sodas and beer.

Mortensen said only five to 10 Army Superior Unit awards are given each year. It&#8217;s rare that a division-size group such as the 21st TSC is recognized; usually the award goes to smaller outfits.

First Lt. Chad Lauro, a 26-year-old from Harrisburg, Pa., worked in Hungary receiving and distributing food rations with his 574th Supply Company, which is based in Mannheim.

Lauro said he wished he could have been on the front line supporting the troops, but acknowledged that each job is necessary to fulfill a mission.

Lauro and his colleagues in the 21st TSC can now add a scarlet-and-green Army Superior Unit ribbon to their uniforms.