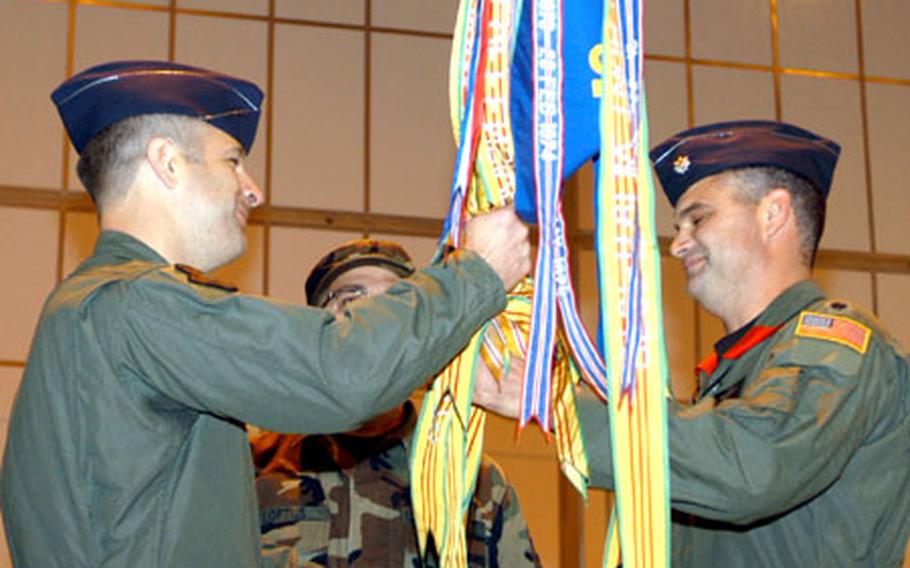 RAF MILDENHALL, England &#8212; One of the most storied squadrons in the history of the U.S. Air Force in England encased its guidon Tuesday morning.

The 21st Special Operations Squadron, which had maintained a fleet of five MH-53J Pave Low helicopters, commemorated the event with a deactivation ceremony in the squadron&#8217;s hangar.

The deactivation will translate into about 250 airmen who fly, maintain and serve as gunners and engineers on the Pave Low leaving the 352nd Special Operations Group, which previously had about 1,000 members.

The squadron, which was one of six in the 352nd SOG, traced its lineage to World War II when the 21st flew fixed-wing aircraft against the Japanese military.

In the mid-1950s, the 21st took on a fleet of H-21 Shawnee helicopters, which participated in airlift as well as search-and-rescue missions.

During the Vietnam War, the 21st was active with missions in Laos, Cambodia and Vietnam, including the evacuation of the U.S. Embassy in Saigon. It earned particular distinction for its role in the 1975 rescue of the crew of the SS Mayaguez, which had been seized by the Khmer Rouge.

&#8220;The persistence to never leave a fallen comrade behind has become part of 352nd legend,&#8221; said the SOG commander, Col. Brian Cutts.

The unit moved to England in 1988 at the now-defunct RAF Woodbridge and later relocated to RAF Mildenhall.

The 21st SOS was the only Air Force special-operations helicopter unit in Europe prior to Tuesday&#8217;s deactivation. For now, special operations units in Europe will depend on Army helicopters for vertical-lift capabilities.

The 21st is slated to uncase its guidon when it takes on a fleet of Ospreys at Cannon Air Force Base in New Mexico.