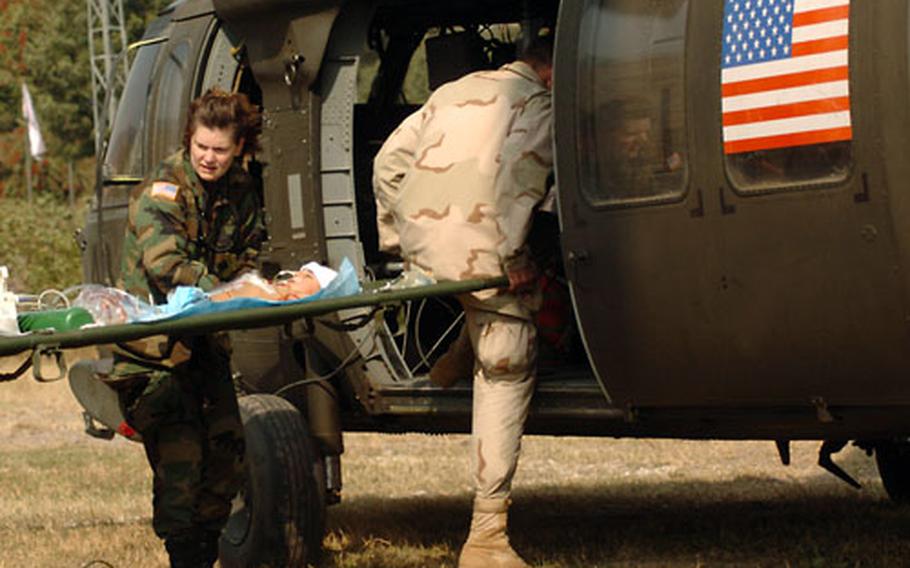 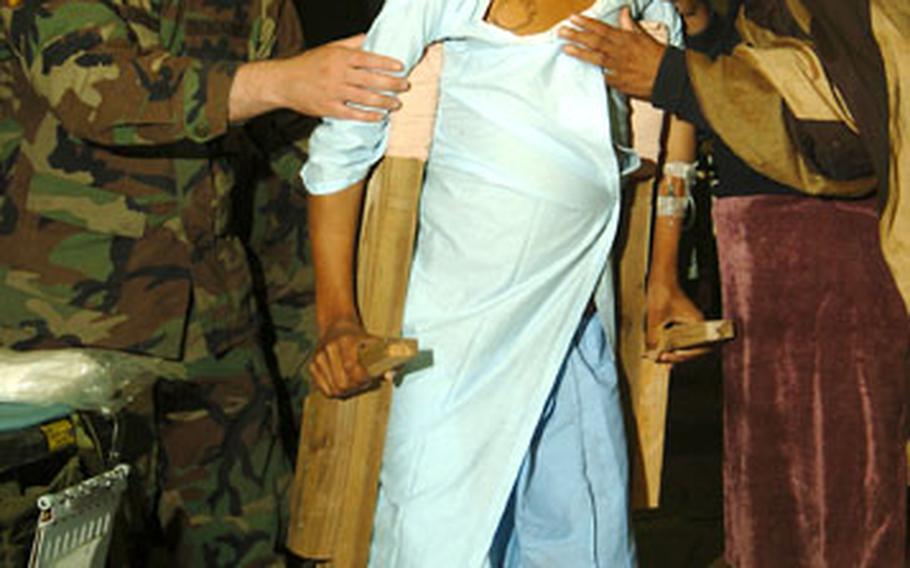 A Pakistani boy with a broken leg gets help from Cpl. Andrew Woughter and his mother as he tries out his new crutches, which were built by a U.S. Navy Seabee. (Eric S. Powell / U.S. Navy)

MUZAFFARABAD, Pakistan &#8212; In the late morning, when the Kashmiri sun starts burning away the night&#8217;s chill and the Himalayan hills turn green and umber, you see them in their tattered robes limping toward the gates.

Some have walked for days, like in biblical times. Others have arrived from their ruined mountain villages in a Pakistani army helicopter and made it the rest of the way on their own, or in local ambulances. Couples carry babies in their arms, and old men who can&#8217;t walk ride piggy-back on other old men bent at the waist from their burden.

All endured terrible losses in last month&#8217;s earthquake that killed some 80,000 people and left scores of thousands more with injuries. And those who make their way to the gate, past the rifle-toting Pakistani police providing security, are all seeking help from the U.S. Army&#8217;s last Mobile Army Surgical Hospital, the 212th MASH.

Lt. Col. Ann Sammartino has been preparing for them since 5:30 a.m. Sammartino, MASH deputy commander for nursing, starts her rounds early, striding around the hospital grounds on a Kashmiri government complex, in her size five combat boots, carrying her walkie-talkie, and dealing with whatever comes up so that patient care proceeds as seamlessly as possible.

Inside the ER is a typical case, a dark-eyed girl wearing embroidery, lying silent on a stretcher, attended by a shrunken old woman who looks like Mother Teresa and says through a translator that she is 55 years old. She is the girl&#8217;s mother and called Roshijan Baba.

Look, Roshijan gestures, come closer and see the terrible thing that has happened to us, as she thrusts open the bandages on her beautiful daughter&#8217;s leg.

The leg is hugely swollen and discolored; the girl, Rosina, has a broken femur. Still, she&#8217;s relatively lucky. The skin is intact, lowering her chance of infection. Rosina is scheduled for surgery to align the bone and fix it in place.

That sort of orthopedic surgery has been the bread and butter of the hospital&#8217;s operating room. Since the ER opened Oct. 25, 40 surgeries have taken place, mostly on broken bones and badly infected wounds.

Capt. Melissa Terry, an obstetrician, performed the unit&#8217;s first surgical procedure: on a 19-year-old woman who had miscarried and was hemorrhaging blood, as her husband sat weeping in a waiting area.

Terry also has done routine obstetrical exams on several pregnant women, and noticed that many of them are fasting for Ramadan. &#8220;We have to really reinforce they have to at least drink water,&#8221; she said. &#8220;To cross those cultural boundaries is very difficult.&#8221;

But some things are universal. Although most of Terry&#8217;s patients have had five, six or more children, when they see their fetus on an ultrasound monitor, &#8220;They have this great look of joy,&#8221; she said.

The hospital has treated patients with heart attacks, respiratory problems, gastrointestinal disorders, meningitis and a variety of parasites.

Hospital staffers were expecting the bone fractures, but they&#8217;ve also been seeing the sorts of ailments rare nowadays in the West. By Monday, the staff had seen four cases of tetanus. These are tragedies that medical people find fascinating.

The patients are usually stoic, or numb. They don&#8217;t talk much or cry out in pain, or react after being treated.

The hospital, the primary medical asset provided by the U.S. military to Pakistan, is among seven other health care facilities, including those run by Canadian and French militaries, which set up shop in the region following the earthquake. According to Col. Angel Lugo, the unit&#8217;s commander, the MASH is unique in its capacity and sophisticated surgical care.

Since its arrival, the MASH has added capability, with more beds and more doctors and nurses and technicians and is now &#8220;as big as we&#8217;ve ever been,&#8221; Sammartino said.

The need remains enormous. Some 200,000 people remain trapped in villages cut off by landslides and the rugged landscape, international relief officials say, and up to 10,000 children could die if they don&#8217;t get help and shelter in the next three weeks, before winter turns cold nights to freezing ones.

More than 3 million people are believed homeless because of the quake, Rashid Kalikov, U.N. coordinator for humanitarian assistance said. Another 800,000 people had no shelter at all.

Hassan Shahid, inspector general of police in Pakistani-controlled Kashmir, said there were about 51,000 people injured in Muzaffarabad alone, and 20,000 killed &#8212; of a population of 150,000.

That lack has caused a problem at the MASH: what to do with in-patients&#8217; relatives. The first few nights, they were allowed to stay in the ICU. They helped make the patients feel better, less isolated, but took up precious space and resources. By the end of the week, MASH administrators ordered up visiting hours &#8212; 9 a.m. to 6 p.m. &#8212; and said the relatives, except for those accompanying young children or critical patients would have to go.

The edict didn&#8217;t last long; there was nowhere for them to go. The hospital was coordinating with aid agencies to provide some sort of family center &#8212; and in the meantime some relatives stayed Sunday night in the &#8220;minimal care unit&#8221; &#8212; a big tent lined with bare cots.

Sammartino was taking a lunch break Monday about 11 a.m., spreading apple jelly from one MRE on a chicken breast from another, slapping it between two pieces of snack bread. She sat on the ground in the shade of one of her tents, with 12 hours to go before she&#8217;d sleep. And as she considered her mission one week in, she was a happy woman.

The unit, she said, would prefer to be nowhere else.