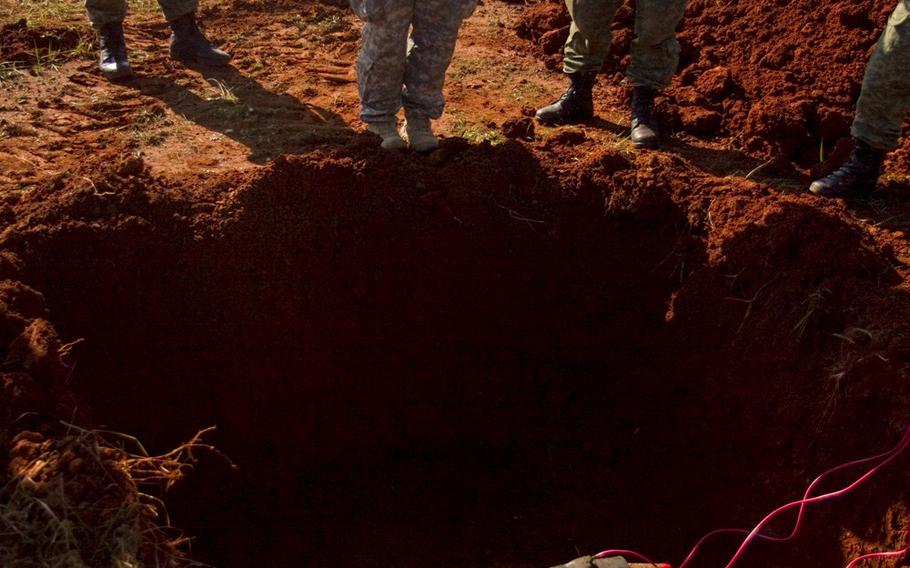 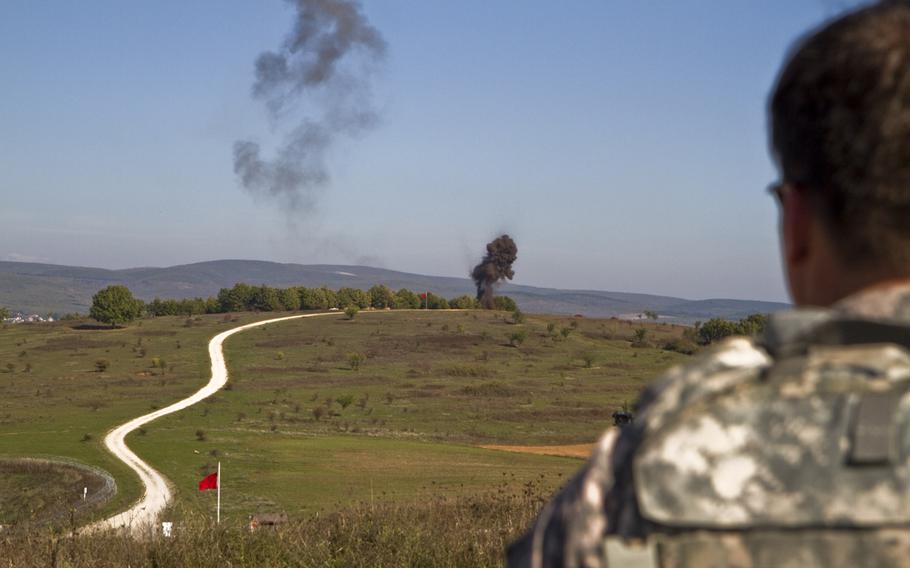 A U.S. Army explosive ordnance disposal soldier from the 666th Explosive Ordnance Disposal Company watches as a collection of ordnance is detonated on Oct. 30, 2015, on a demolition range at Camp Bondsteel, Kosovo. Seventeen years after NATO's bombardment of Kosovo, a peacekeeping mission forgotten by many quietly carries on in the small Balkan nation. (David Marquis/U.S. Army) 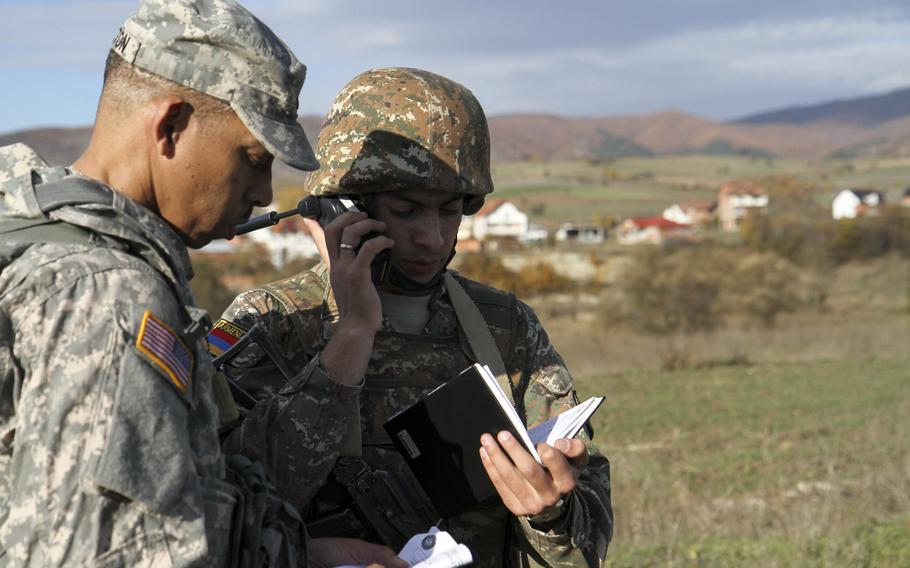 U.S. Army Master Sgt. Jonathon Cureton, from the 361st Civil Affairs Brigade out of Kaiserslautern, Germany, instructs an Armenian soldier during a training exercise on Nov. 12, 2015, in Rogagic, Kosovo. KFOR, NATO's peace support mission in the region since 1999, continues to ensure safety, security and freedom of movement in Kosovo. (Gina Russell/U.S. Army) 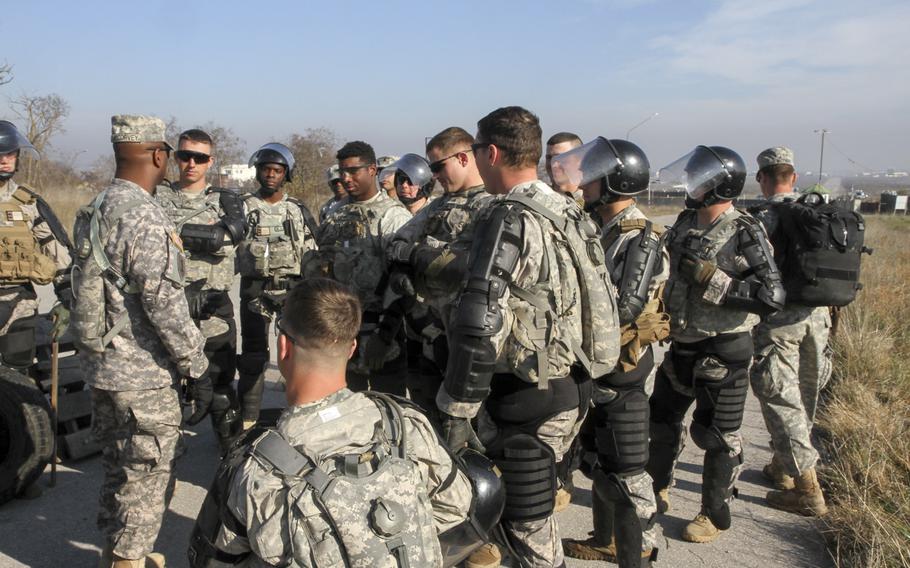 Nearly 20 years after NATO’s bombardment of Kosovo, a mission forgotten by many quietly carries on in the small Balkan nation, where U.S. forces recently wound down their 20th troop rotation as part of an international peacekeeping effort.

More than 28 NATO member states and alliance partners currently contribute troops to the Kosovo Force, or KFOR, which is dominated by contingents from Germany, Italy and the United States — all of which have more than 500 service members in the mission.

“Our mission in Kosovo is really twofold,” said Col. Vernon H. Simpson, who commands the 30th Armored Brigade Combat Team, a North Carolina Army National Guard unit, and led the brigade during its nine-month deployment. “One is a broad, overarching theme of maintaining a safe and secure environment, and the second part is freedom of movement.”

Simpson’s command included company-size units — roughly 150 troops — from NATO allies Poland, Hungary, Germany and Turkey, with which his U.S. troops work every day. Simpson says this was a bonus.

“Having soldiers from different nations in our battle group gives us an opportunity that we don’t normally get,” he said. “You’ll find that soldiers from these other nations are extremely professional and competent, and they have ways of doing things that we may not be familiar with. So it allows us an opportunity to really expand our horizons and perform at a higher level.”

Kosovo, a nation of 2 million people — 90 percent of them ethnic Albanians and the rest Serbs — was a province within Serbia until 1999. That year, Serbia’s then-leader, Slobodan Milosevic, launched a bloody crackdown to stamp out a persistent, low-level insurgency. The campaign drew comparisons with the ethnic cleansing that had occurred in Bosnia just a few years earlier, and the international community intervened militarily against Milosevic’s forces.

After an 11-week bombing campaign by NATO, Serbian troops withdrew from the province, and Kosovo became a United Nations protectorate. In 2008, its government unilaterally declared independence from Serbia.

Belgrade has refused to recognize the new state, but today, more than 100 nations, including the United States, recognize it. Some of the largest countries, however — such as China, India, Russia and Indonesia — have opposed the break and have blocked Kosovo from joining the United Nations.

Over the years, tensions between Serbia and Kosovo, and also between the two main ethnic groups, have abated significantly. At the same time, the international military mission there has slipped among the Pentagon’s priorities since Sept. 11, 2001, and the invasions of Afghanistan and Iraq. The job now falls mainly on Army Reserve and National Guard units, and soldiers are often caught unaware when they learn they will go there.

“At first, I thought, ‘We’re still there?’” said Capt. Will Reyes of the West Virginia Army National Guard. He commanded a liaison monitoring team responsible for interacting with Kosovo officials and citizenry.

“I was surprised, but the more I learned about it, I learned it was truly a U.S. success story, a NATO success story. People here have the highest approval of U.S. foreign policy in all of Europe. Even those who don’t have very much have bought us coffee to show appreciation. I’m very glad to have been able to be part of this.”

While interethnic violence in the Balkans is sharply down, the political situation within Kosovo remains volatile. In recent months members of the opposition in parliament have repeatedly unleashed tear-gas canisters inside the chamber in protest at international agreements and policies they claim would increase Serbian influence in Kosovo’s politics. Large anti-government demonstrations are frequent, and several opposition lawmakers have been detained by the police in recent weeks.

But the civil unrest has not required NATO intervention, Simpson said.

“Our mission is to serve as the third responder, behind the legitimate institutions in Kosovo, like the police, and we’ve found is that they are extremely capable and competent,” he said. “We conduct training with them routinely, and every time they are confronted with instability, they rise to the challenge.”

Still, there remain stark reminders of the brutal civil war that followed the breakup of Yugoslavia. One of them is the large number of unexploded ordnance pieces that locals frequently dig up.

“Typically, we’ll have a farmer plowing his field and he’ll find an old anti-tank round, and the call comes up through the Kosovo police, the embassy, and the embassy decides what team is closest,” said Staff Sgt. Brian Harris, an EOD team leader from the Alabama Army National Guard. “It was stressed to me when I got here that these guys know what they’re doing, they don’t need someone to baby-sit them or hold their hand.”

Despite the increased capability of local institutions like the KSF and Kosovo police forces, it’s unlikely that this, the 20th rotation of U.S. forces to this corner of the Balkans, will be near the last, Simpson said.

Both the Kosovo government and the vocal Serb minority, which fears domination by the ethnic Albanian majority, insist that the NATO force should remain for now as the ultimate guarantor of peace.

“Kosovo is much more secure than it has been, but to say that the mission is winding down would be a stretch,” Simpson said. I think that KFOR will likely stay in Kosovo so long as the Kosovars request it to be here. Quite frankly, I don’t see KFOR leaving any time soon, unless everyone, including Kosovo, agrees the time is right.”