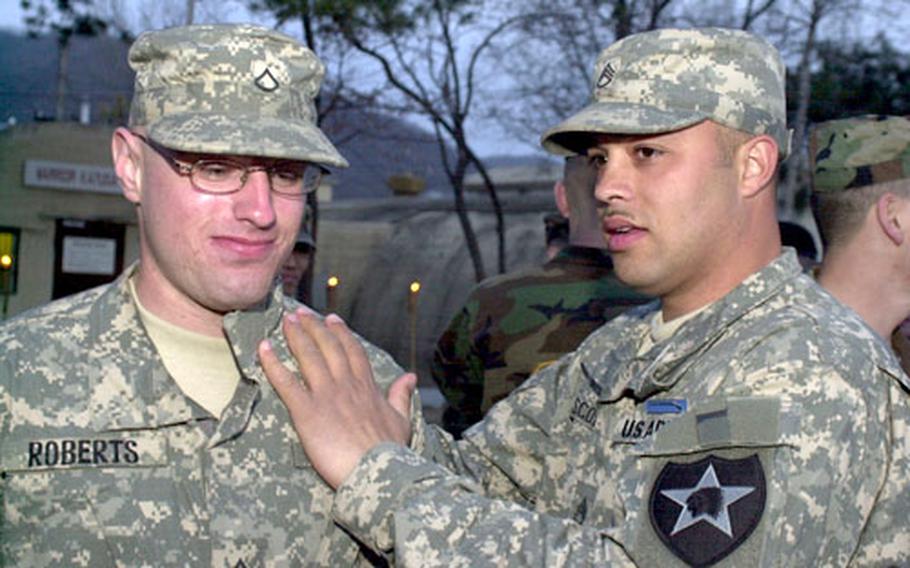 Some practiced throwing grenades during their free time. Others assembled and disassembled electronics well into the night, and possibly in their dreams.

Of 344 soldiers who vied for the distinction, the 209 who wore the light blue and gold badge Thursday cited practice beyond the requirements as the reason they succeeded in earning it after testing this week.

There are high-ranking officers and sergeant majors in the Army who needed two or three attempts to earn the badge. Two months out of boot camp, Lee earned his badge on the first shot.

The 61 percent pass rate in this round is unusually high for an honor that sometimes eludes as much as 80 percent of a given class. Last year, just less than half passed.

The higher pass rate was at least partially by design; Command Sgt. Major Jason Silsby set his pass rate target at 70 percent, stocking the course with training aids and providing ample space for the course&#8217;s 27 stations.

None of the tasks is supposed to go beyond the scope of any properly trained infantry soldier. It&#8217;s the concentration of so many tasks at once that trips up some hopefuls.

Several soldiers credited the knowledge they gained from previous tries as part of the reason they earned their badges Thursday.

&#8220;I just stayed more focused this year and had good training from my lieutenant back at the company,&#8221; said Spc. Joseph Pratcher, of 2nd Battalion, 9th Infantry&#8217;s Company B.

They pinned the badges on their soldiers &#8212; some with a &#8220;love pat&#8221; that will no doubt stay with the soldiers for a few days. Past recipients say the sense of accomplishment lasts throughout a career.