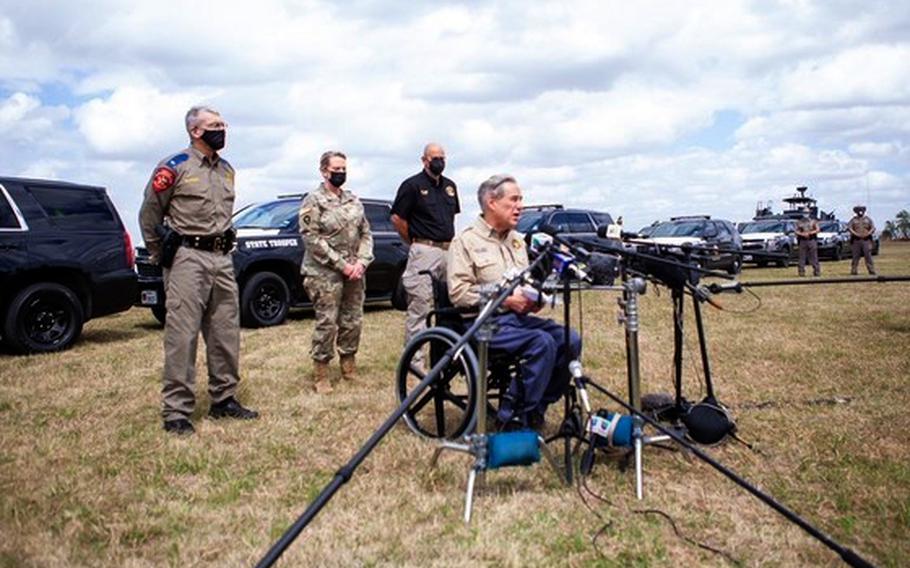 Texas Gov. Greg Abbott announced Tuesday that he will deploy about 500 members of the Texas National Guard to the state’s border with Mexico to control an increase in apprehensions of people crossing the border illegally. (Texas governor's office)

AUSTIN, Texas — The Texas National Guard will deploy 500 troops to the state’s border with Mexico this week as part of a surge of resources that Gov. Greg Abbott said are necessary to stop the increase in illegal activity there following federal policy changes.

“We will work to step up and try to fill the gap that the federal government is leaving open by making sure we deploy every resource, whether it be Department of Public Safety or Texas National Guard, whatever we need to do. Texas is going to fight for the safety and security of our state,” Abbott said Tuesday during a news conference along the border in Mission, Texas.

The 500 troops will arrive by the end of the week and have already begun training to work in observation posts in support of the Department of Public Safety, which is adding about 1,200 state police officers to the region. The Guard has already embedded planners within the department and begun to train soldiers who will deploy to the border, said Maj. Gen. Tracy Norris, Texas adjutant general and commander of the Texas Military Department.

“We have been supporting the border for our governor and our federal and state partners for over 15 years,” Norris said.

About 100 of the soldiers set to deploy served on similar border missions last year, she said.

Funding for the mission, dubbed Operation Lone Star, will come from the $800 million that the Texas legislature designates each session for border security, Abbott said.

This mission is separate from the federal National Guard mission to support U.S. Customs and Border Protection across the entire southern U.S. border that began under former President Donald Trump in April 2018 and continues under President Joe Biden. About 3,600 active-duty service members and Guard troops from several states are deployed through that mission, according to the Defense Department.

A Government Accountability Office report recently revealed the Department of Homeland Security expects to need continued military support at the border for at least the next three years.

Texas troops have supported the federal mission and, in 2019, Abbott sent about 1,000 Guard troops under state orders to temporarily assist that mission.

Abbott said Tuesday that this new influx of resources is necessary because apprehensions for illegal entry into the country are already up in the Rio Grande Valley sector of Texas, which covers southeast Texas from Orange County west into Starr County.

Last year, Border Patrol apprehended about 90,000 people in the Rio Grande Valley. This year, there have been 108,000 apprehensions so far, Abbott said.

Prior to the news conference, Abbott inspected the border from the air. He said he saw a raft with about 21 people, including children, attempting to cross the Rio Grande River.

“There is a crisis on the Texas border right now with the overwhelming number of people coming across the border. This crisis is a result of President Biden’s open border policies. It invites illegal immigration and is creating a humanitarian crisis in Texas right now that will grow increasingly worse by the day,” Abbott said, citing two specific policy changes as the problem.

Biden changed Trump’s Migrant Protection Protocols, also known as “Remain in Mexico,” which kept asylum seekers waiting for court dates in Mexico instead of entering the United States. Biden has stopped adding people to the program, but his administration has not outlined how to process the 65,000 people already in it.

The second policy, known as “catch and release,” was used under former President Barack Obama and reinstated by Biden. It allows people to be paroled in America as they await court proceedings instead of remaining in detention.

Speaking at the White House last week, Homeland Security Secretary Alejandro Mayorkas said he does not believe there is a crisis at the U.S.-Mexico border.

“I think there is a challenge at the border that we are managing, and we have our resources dedicated to managing it,” he said. “The men and women of the Department of Homeland Security are working around the clock, seven days a week, to ensure that we do not have a crisis at the border, that we manage the challenge as acute as the challenge is, and they are not doing it alone.”