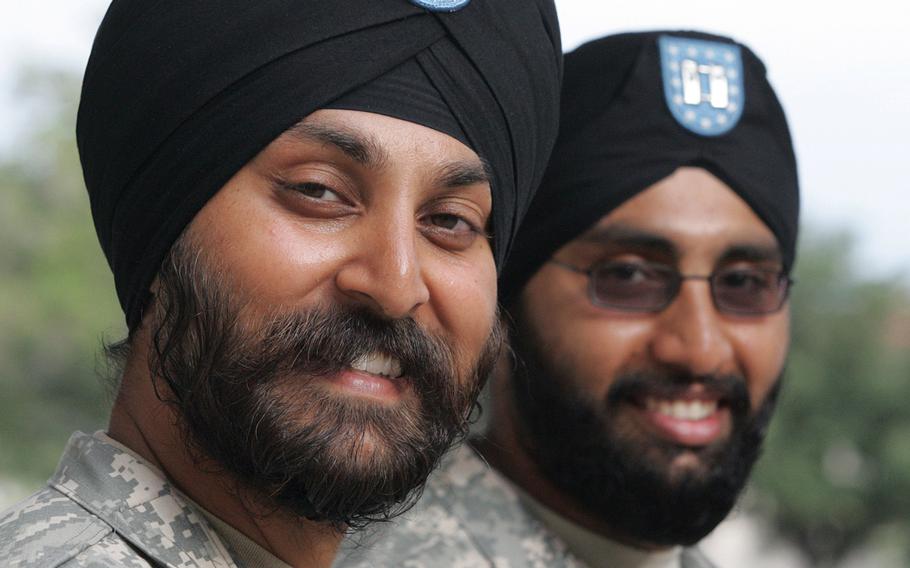 Army Lt. Col. Kamal Kalsi; left; and now-Maj. Tejdeep Rattan were the first two Sikh soldiers to receive an exemption to serve in their religiously-mandated beards and turbans in 2009. The Army has since approved at least 15 additional Sikhs to serve while maintaining their articles of faith; including eight such exemptions in the first two months of 2017. (Alicia Wagner Calzada/Sikh Coalition)

WASHINGTON — Eight Sikh Army recruits have received waivers this year allowing them to maintain their religiously mandated beards and turbans in uniform, nearly doubling the number of observant Sikhs in the Army despite a decades-old policy barring visual symbols of faith.

The most recent religious appearance accommodations were granted in January and February, according to records reviewed by Stars and Stripes, just weeks after then-Army Secretary Eric Fanning simplified the process observant Sikhs and Muslims must follow to receive a waiver. This could signal a relaxing of the Pentagon’s ban instituted in 1981 on outward symbols of faith in uniform, which is being reviewed by the Defense Department and each of the military services, three defense officials said.

The Army has approved at least 17 exemptions for Sikh soldiers to maintain their unshorn beards and turban-covered hair since 2009, when it granted the first such request to Kamal Kalsi, a medical doctor who is now a lieutenant colonel.

“Military service and service in general is such a big part of the Sikh community,” Kalsi said in a recent interview. “In taking my oath as an officer in the Army, the things that I swore an oath to are the same things that I was taught as a Sikh growing up – honesty, integrity, courage. These things are all part and parcel of being a Sikh and of being a good soldier in the U.S. Army.” 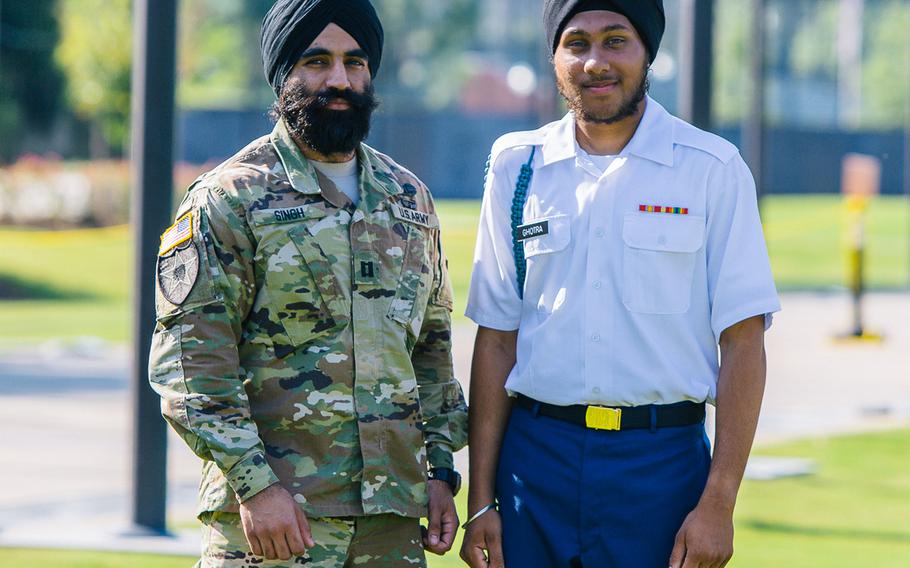 Army Capt. Simratpal Singh, left, is pictured with Pvt. Arjan Singh Ghotra in September 2016 as Ghotra graduated from One Station Unit Training at Fort Benning, Georgia. Singh, a West Point-educated engineering officer stationed at Fort Belvoir, Virginia, was granted a religious accommodation last year to wear a beard and turban in uniform, as directed by his Sikh faith. Ghotra was granted the same waiver later in 2016 just before he entered basic training. (Nathan Leduc/Sikh Coalition)

For many servicemembers, the process to receive a policy exemption to wear a simple symbol of their faith, such as a yarmulke for Jewish servicemembers, can be approved by their direct commanding officers, but for observant Sikhs — and for some devout Muslims who must wear beards or hijabs — the longstanding Pentagon policy requires a formal waiver to the military appearance standards. Until recently, those exemptions were rarely granted.

That appears to have changed — at least in the Army.

The eight accommodations approved by the Army this year follow six exemptions that the service granted to recruits in 2016, according to the non-profit Sikh Coalition. Army Lt. Col. Jennifer Johnson, a spokeswoman for the service, said she could not confirm the number of soldiers or recruits who have received a religious appearance exemption because the process has been “decentralized” and records are maintained at various installations.

Before last year, only three Sikh soldiers had been granted similar accommodations since 1981, according to the coalition. Sikh Coalition spokespersons said they were unaware of any observant Sikhs serving in the other military branches. Spokespersons for the Air Force, Navy and Marine Corps said they were not aware of any Sikhs serving in those branches with an accommodation to wear an unshorn beard and turban in uniform.

On Jan. 4, just days before he left office with the President Barack Obama administration, Fanning issued a memorandum that mandated brigade commanders grant accommodations to soldiers or recruits seeking to wear religiously required beards or headwear in uniform with only a few exceptions. Previously, such decisions were made by the secretary. They remain decisions relegated to senior officials in the other military branches.

Fanning’s order instructed commanders to deny requested religious exemptions only if they are “not based on a sincerely held religious belief” or they would cause “a specific, concrete hazard … that cannot be mitigated by reasonable measures.”

The Sikh Coalition, which brought lawsuits last year against the Army backing four Sikhs in their pursuits of religious accommodations, welcomed Fanning’s decision. But the group has not finished its fight, said Harsimran Kaur, the coalition’s legal director.

Ultimately, she said, the coalition wants to see an end to “all religious discrimination” and seeks a Pentagon-wide policy change to allow persons of any religion to maintain their visual articles of faith in uniform without requiring an accommodation.

The Pentagon has long pointed to two primary reasons for retaining its ban on visible religious articles — the need for uniform appearance to maintain good order and discipline and the potential impact such articles could have on servicemembers’ safety equipment. Beards, especially, Pentagon officials have said, can interfere with the effectiveness of protective masks.

Kalsi rejects both arguments. He and other bearded Sikhs have been able to properly seal Army-issued protective masks to their face and pass standard gas chamber testing, he said.

Furthermore, Kalsi said he has never had issues with other servicemembers because of his visible tenets of faith.

“They have always sort of found it fascinating, or found it really cool,” he said. “The military always argues that the turban and beard may affect espirit de corps or unit cohesion. My experience and the experience of other Sikh soldiers who have deployed has always been the same – that we’ve never had any problems getting along with our units.”

Sikhism is a monotheistic religion that emerged in the 15th century in the Punjab region of what is now India and Pakistan. The religion is founded on the ideals of resisting oppression and service to mankind, Kalsi said.

Sikhs consider military service among the highest honors for its followers. Today, bearded, turbaned Sikhs serve in the militaries of India, the United Kingdom, Austria, Canada, the United Nations and others. Canada’s Defense Minister Harjit Singh Sajjan is an observant Sikh.

Sikhs are expected to stand up for religious freedom — and not just for their own religion, Kalsi said. Sikhs have a long-established tradition for sticking up for followers of other religions facing oppression.

Sikhism is the world’s fifth largest religion. Though it is unclear precisely how many observant Sikhs live in the United States because of a lack of census data, the Sikh Coalition believes there are more than 500,000 living in the nation.

It is equally unclear how many Sikhs serve in the military. The Pentagon tracks population statistics for dozens of religions and religious denominations, but it does not actively track the number of servicemembers who identify as Sikh, a Defense Department spokesperson said.

Even without a religious accommodation to wear a beard or turban, some Sikhs do choose to serve in the military. For example, Army Capt. Simratpal Singh, an active duty engineering officer stationed at Fort Belvoir in Virginia, chose to shave his beard and cut his hair upon arrival at the United States Military Academy at West Point in 2006. He called the decision “excruciating” in a 2016 interview with Stars and Stripes shortly after he was granted a mid-career accommodation to regrow his beard and hair and wear a turban.

But Sikhs are often misunderstood, said Kaur, the legal director for the Sikh Coalition. She said many Americans associate their turbans with Osama bin Laden or al-Qaida.

A 2013 study published by the Sikh American Legal Defense and Education Fund and Stanford University entitled “Turban Myths” supports Kaur’s statement. It found that 50 percent of Americans associate turbans with Islam and they incorrectly believe Sikhism is a denomination of Islam. Some 70 percent of Americans were unable to identify a Sikh person in a photograph, the study also found.

“The reality is that 99 percent of turban-wearing people in the country are Sikhs,” Kaur said. “It’s a lack of understanding.”

The future for Sikhs in the military

Kalsi, who remains in the Army Reserves as a disaster medicine expert, said he expects the Army to receive an influx of waiver-seeking Sikhs wanting to serve with beards and turbans.

“Many, many were pushed away by the administrative process” to receive an accommodation, he said. “I certainly hope to see a lot more young Sikhs fulfilling their own goals in the military. It’s the best decision they will make.”

Kalsi said Sikhs — including himself — have proven they can serve in the most demanding conditions while maintaining their tenets of faith. He was awarded a Bronze Star Medal for his service during a 2011 deployment to Helmand Province, where he was charged with caring for more than 750 wounded troops and civilians.

“He’s shown that Sikhs can perform successfully,” Kaur said. “That’s one of our larger goals — to show that nothing prevents you from being a productive and patriotic soldier and an observant Sikh.”

The eight Sikhs who have received waivers this year to maintain their beards and turbans in uniform are expected to enter basic training in the coming months. One, Pvt. Shabaddeep Singhjammu, a 24-year-old infantry recruit from California, has already begun his training.

Kaur said the Sikh Coalition is working with or has heard from several more Sikhs interested in joining the Army. She hopes to see observant Sikhs in all of the U.S. military branches in the future, but the coalition has not actively pursued accommodations for Sikhs to join the Air Force, Navy or Marine Corps.

For Kalsi, wearing his “religious uniform” with his military uniform provides him confidence as a soldier.

“I know that my faith makes me a better soldier,” the lieutenant colonel said. “It makes me stronger, it makes me more resilient and it sustains me in ways that I would have a hard time explaining.”