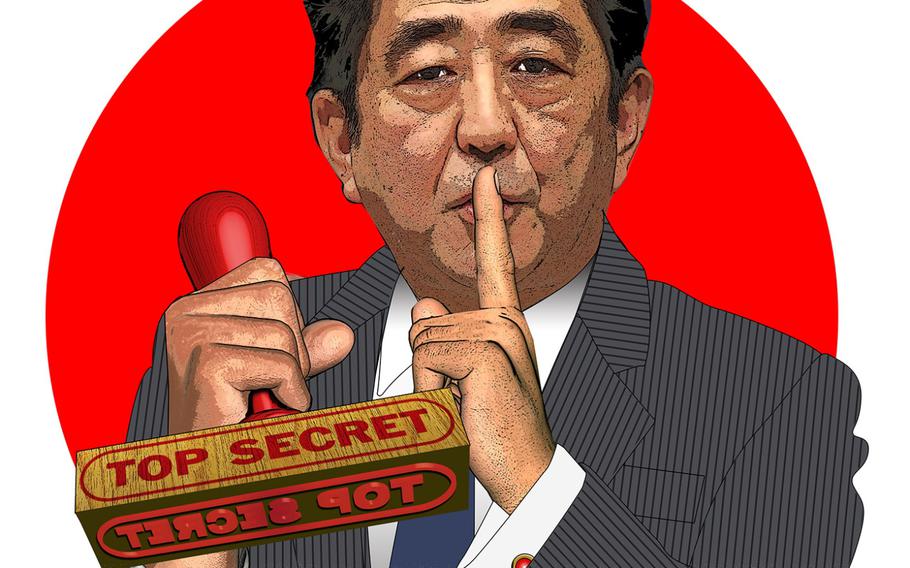 This redacted newspaper article is what Information Clearinghouse Japan, a non-profit civic group, received from the Japanese government after a public records request for figures on the number of grievances filed against police officers for civil rights abuses. (Erik Slavin/Stars and Stripes)

TOKYO — A new secrecy law in Japan could please U.S. security officials who share classified military information with Tokyo, but civic groups, journalists and legal analysts say it may pose a threat to government watchdogs and the public’s right to know.

Opponents of the law, passed Dec. 6 at the end of a special legislative session with little public debate, say its broad language and criminal penalty clauses could be used to keep government misdeeds from public view. The law penalizes civil servants with up to 10 years in prison for leaking state secrets, protocol similar to U.S. punishment. But Japan goes much further than the U.S. and other democracies with a clause that penalizes citizens with prison if they use “inappropriate methods” in encouraging a bureaucrat to divulge information considered secret.

“It says very clearly that these information-gathering activities are only subjected to penalties if the person is trying to get this kind of information on behalf of a foreign government,” Gen Nakatani, the government’s point man on national security, said in response to a Stars and Stripes question Dec. 11. “In other words, engaging in spying opportunities, or perhaps trying to work on behalf of a terrorist organization.

“If that person, without that kind of motivation, reveals that information, I do not think he would be subjected to penalty.”

However, legal analysts remain concerned about how current and future governments might evaluate the motivations of a citizen or journalist.

Tsutomu Shimizu, secretary-general of the Japan Federation of Bar Associations, said his group is often consulted on matters of legal precision prior to bills being introduced in Japan’s national Diet. There was no such consultation for this law, he said.

“What we lawyers are particularly concerned about is that this law could get out of hand,” Shimizu told reporters recently. “It really depends on … how a court would evaluate [a journalist’s] behavior.”

Civil rights and media groups already take a dim view the Japanese government’s respect for its citizens’ right to know.

Japan ranked 53rd on Reporters Without Borders’ current press freedom index, falling 31 places from 2012 due to lack of disclosure related to the March 11, 2011, earthquake and the ensuing nuclear disaster in Fukushima Prefecture.

Prior to establishing its first public records law in 2001 — a law similar to the U.S. Freedom of Information Act — various government agencies destroyed millions of files, according to records obtained by Information Clearinghouse Japan. When the group requested more recent data on the number of documents destroyed by the defense ministry, director Yukiko Miki said she received a piece of paper showing an entirely redacted table.

A request to the National Police Agency for figures on civil rights grievances filed against police officers yielded a single newspaper article. The government redacted multiple paragraphs of the article — normally available throughout Japan at newsstands — with black bars. An appeals committee concurred with the decision.

“This is the current state of information disclosure in Japan,” Miki said.

Miki and others fear that the new secrecy law will be used in a similarly broad fashion. Once cabinet agency directors label a document secret, the primary body that would review the secrecy ruling also works for the prime minister’s cabinet. The law calls for another layer of oversight, though it is yet to be determined whether it will have any independence.

The Liberal Democratic Party, which has led Japan for most of the post-WWII era, submitted secrecy legislation in 1985 that ultimately failed amid similar concerns of ambiguous wording and the inhibition of free speech.

When the party regained control a year ago, after about three years out of power, bolstering security became a top priority. The issue gained further traction in January, when 10 Japanese were killed in Algeria after terrorist groups took a group of civilians hostage.

Before the new law, each government cabinet office had its own procedures and standards for classifying information. Nakatani noted that a past incident which the foreign ministry considered secret was determined worthy of a news conference by the coast guard.

The lack of clear standards has led the U.S. to share information more cautiously with Japan than with its most trusted allies, U.S. officials have told Stars and Stripes. The U.S. might share certain types of military intelligence briefings with Japan on, for example, foreign military movements in Pacific waters; however, it normally does not provide raw data.

It is still early to tell what intelligence resources Japan will gain from the new law.

“This is going to take away one of the obvious impediments to the sharing of intelligence with the Japanese,” said Brad Glosserman, executive director of the Pacific Forum of the Center for Strategic and International Studies, a non-partisan think tank. “There will be some test cases … a blank check request for intelligence is not going to be just honored in full.”

The secrecy law is part of changes to Japan’s broader security strategy, which has received far more attention now than in recent Japanese administrations.

The changes have been accelerated by tensions over North Korean ballistic missile threats, as well as a heated territorial dispute over the Japanese-administered Senkaku islands in the East China Sea, which are also claimed by China as the Diaoyu islands.

On Dec. 17, Japan will formally unveil its new long-term national defense guidelines, which will acknowledge “the rapid expansion and step-up of China’s maritime and air activities,” according to a draft report.

Polling has shown that the Japanese public favors only minimal changes to laws that would reinterpret Japan’s pacifism.

Of all of Abe’s recent proposals, the secrecy law may be least popular. It is opposed, at least in part, by 82 percent of the Japanese public, according to a recent Kyodo News poll. Abe’s approval rating has plunged 10 points to 47.6 percent, the first time it dropped below 50 percent since he took office in the Liberal Democratic Party’s landslide win a year ago.

Those numbers might trouble an American politician fighting to stay in office. But Abe has no real opposition. A no-confidence vote brought against him by opposition parties on the heels of the secrecy vote failed miserably. And although the LDP only garnered 38 percent support in the Kyodo News poll, the second-largest group of those polled — 33 percent — said they supported no party.

With no new national elections expected for years and majorities in both parliamentary houses, Abe’s security plan appears on course, even without a public consensus.