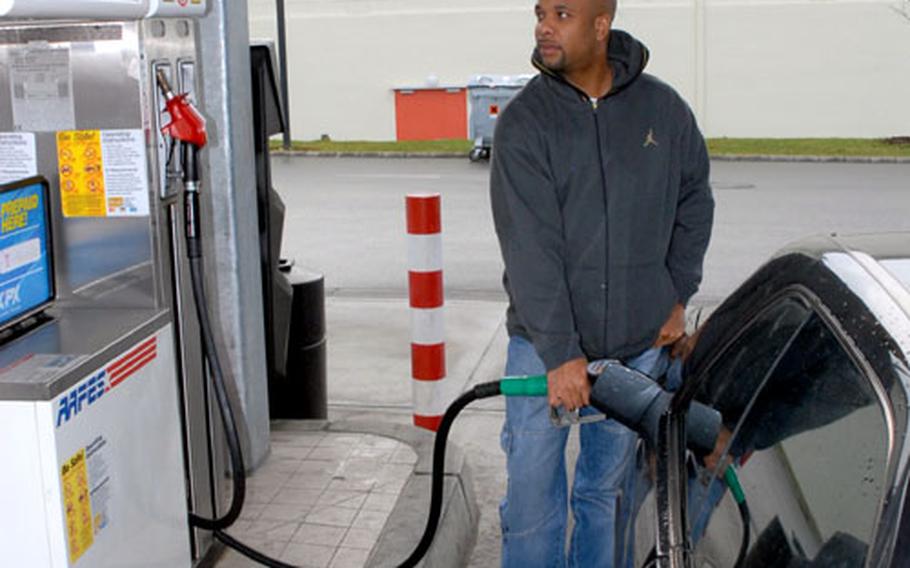 Staff Sgt. Jacque Ewers, of Mannheim, Germany&#39;s 9th Military Police Detachment gasses up his Mercedes at Warner Barracks in Bamberg, Germany, Friday. Ewers, who fills up his six-cylinder sedan once a week, is one of the thousands of customers in Germany who will see a seven-cent raise in gas prices starting Monday. (Mark St.Clair / S&S)

Americans in Germany will start the new year with a seven-cent hike in prices at the gas pump.

The Army and Air Force Exchange Service announced Friday that a gallon of regular unleaded in Germany will rise to $2.46 from $2.39. The price is 11 cents more than last January&#8217;s price.

Fuel prices in Italy will not change in January, the Navy announced this week.

Increasing demand for gas during the holiday season caused prices to rise in the States, according to the AAFES release.

Prices at AAFES gas stations are based on the Department of Energy previous four- or five-week averages in the States. AAFES takes the average and adds dispensing costs and other expenses such as the coupon program to reach its pump price.

According to the Department of Energy Web site, the four-week average for a gallon of regular gas in the U.S. was $2.28 for the period ending Dec. 25.

With price changes happening the first of every month, AAFES lowered prices only three times last year. September saw the worst prices, when regular was a shade above over $3.15 a gallon.

At no point during 2006 did prices fall under where they started in January.

After raising prices 73 cents in the first five months, the first reprieve customers saw was in July, when they dropped just three cents. After going up again in August and September, customers spent more than $3 a gallon the entire summer.

Larger-than-expected drops in prices occurred in October and November, when prices were falling fast in the States, and AAFES modified its pricing policy to reflect two-week averages in the States.

Friday&#8217;s release also mentioned that consumers who purchased Series 7 gas coupons for use on the economy in Germany and the Netherlands have until Sunday evening to use them, or they will expire.

Customers may request a refund for unused coupons, providing they are still attached to the original booklet, at any time before Sept. 30, the AAFES release stated.

The price of a gallon of regular unleaded gas at Army and Air Force Exchange Services stations in Germany for 2006: