2005 in review: Lives lost and democracy earned in Middle East 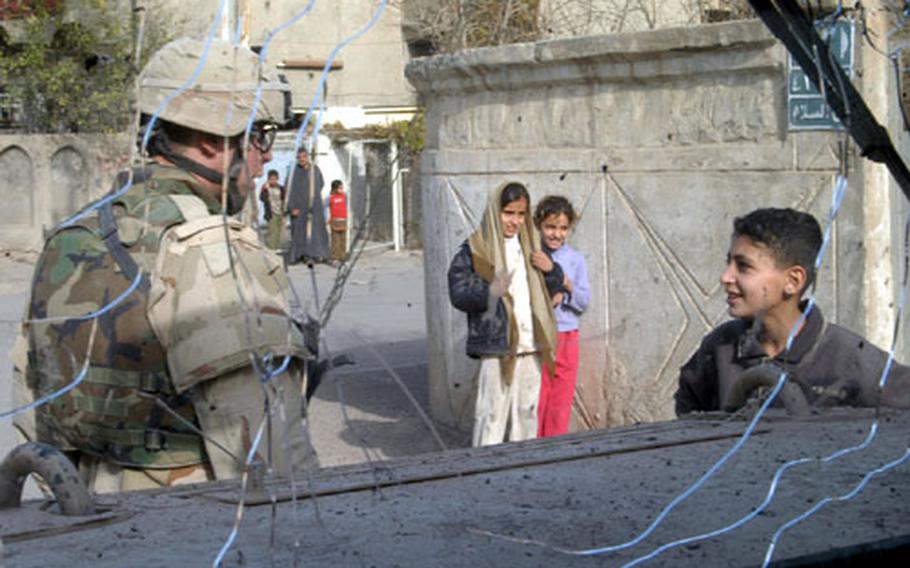 Spc. Michael Johnson talks to an Iraqi boy as soldiers from Company A, 2nd Battalion, 14th Infantry Regiment, patrol a Baghdad neighborhood during the elections. The picture was taken through Johnson&#39;s Humvee&#39;s cracked winshield, which was damaged that morning when a mortar landed nearby. (Jason Chudy / S&S)

Spc. Michael Johnson talks to an Iraqi boy as soldiers from Company A, 2nd Battalion, 14th Infantry Regiment, patrol a Baghdad neighborhood during the elections. The picture was taken through Johnson&#39;s Humvee&#39;s cracked winshield, which was damaged that morning when a mortar landed nearby. (Jason Chudy / S&S) 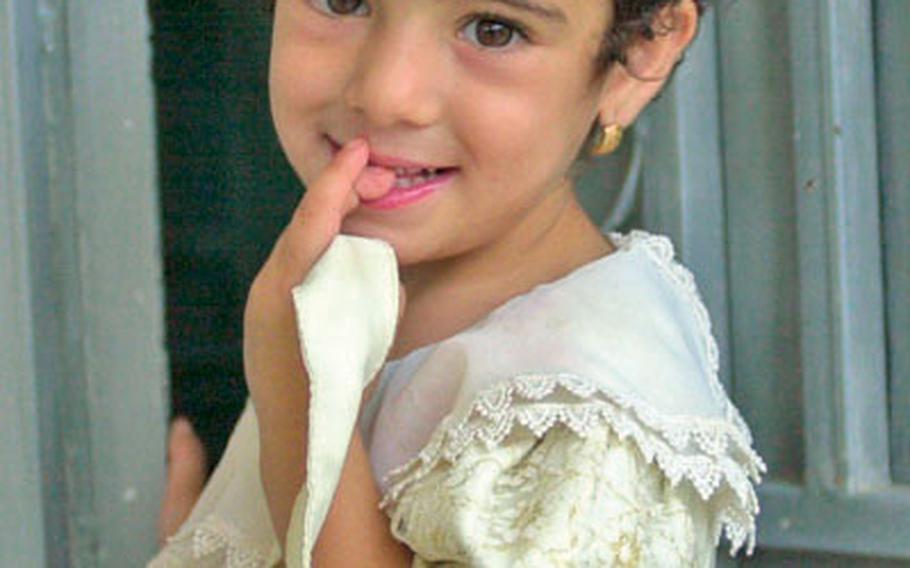 A young Iraqi girl comes out of her house to watch a passing patrol of U.S. and Iraqi soldiers in July. For 2nd Brigade soldiers in Ramadi, it was tough to tell what kind of reception local residents would give them on any given day. (Joseph Giordono / S&S) 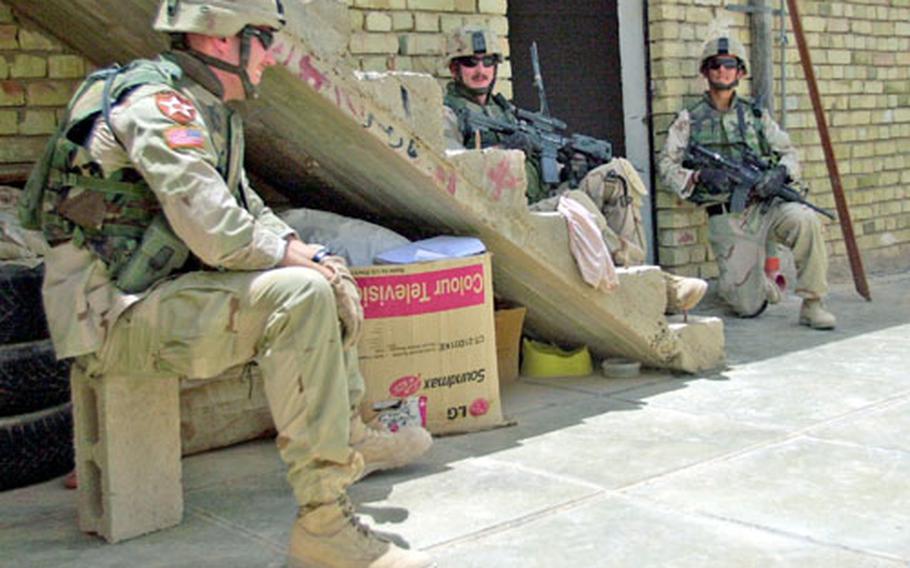 Soldiers from 1st Battalion, 9th Infantry seek some shade during a mission in July as they listen to the preachings of local Imams. From left to right are 1st Lt. Judson Bennett, Capt. Kevin Capozzoli and 1st Lt. Matt Miller. (Joseph Giordono / S&S) 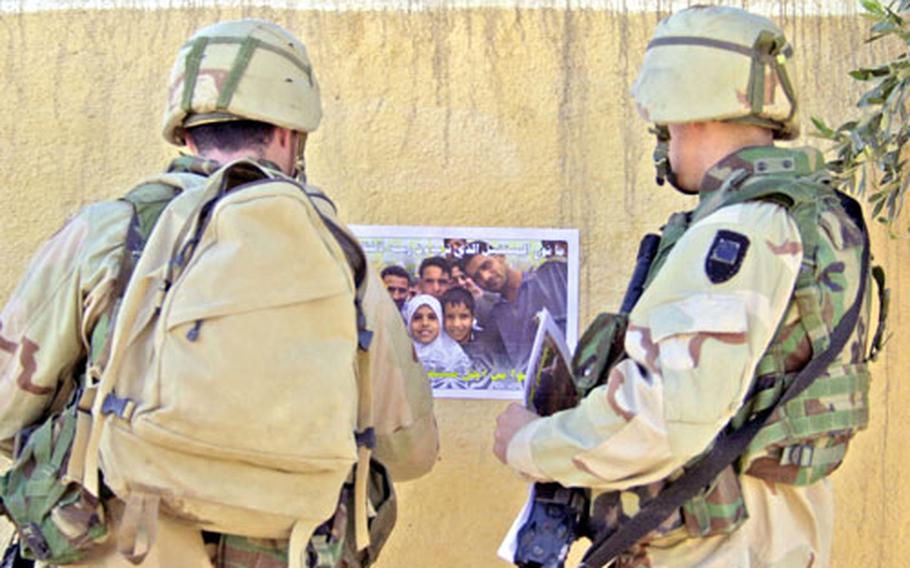 Soldiers from the 2nd Brigade Combat Team built this memorial for their fallen comrades at FOB Ramadi, Iraq. Some 70 names, engraved onto metal plates, adorn a board under the gazebo. The fountain is kept running 24 hours a day. (Joseph Giordono / S&S)

For troops in Iraq, 2005 was a year of marked progress on several fronts, but also a year in which the grinding insurgency took a heavy toll. The year was bookended by two historic votes that witnessed Iraqis deciding on their own government for the first time since Saddam Hussein took power.

It also saw an intensification of the &#8220;clear and hold&#8221; strategy that U.S. military leaders say is a positive shift in tactics, focusing efforts on insurgent strongholds and handing over stable areas to Iraqi forces. To that end, some two dozen U.S. bases in Iraq &#8212; most notably, Forward Operating Base Danger near Tikrit &#8212; were handed back to Iraqi control.

The focus in 2005 was on training Iraqi security forces, the major pillar of the U.S. exit strategy. More than 200,000 Iraqi military and police had been trained by the end of the year, though U.S. officials acknowledge that combat readiness varies wildly from unit to unit.

The year was also marked by the numbers of dead, on all sides. Through Dec. 29, 841 U.S. servicemembers had been reported killed in Iraq. In the fall, the U.S. death toll since the 2003 invasion topped 2,000; some called it an artificial milestone, others used it as a rallying cry for building an anti-war movement in Congress and in the public.

And despite an earlier dictum that &#8220;We don&#8217;t do body counts&#8221; by Gen. Tommy Franks, who commanded U.S. troops in both Afghanistan and Iraq, the U.S. military increasingly turned to releasing the number of suspected insurgents it killed during raids and offensives. President Bush even got into the act, saying in December that some 30,000 Iraqi civilians had been killed since the 2003 invasion.

After the Dec. 15 vote, U.S. officials decided enough progress had been made to announce the first major troop cut, bringing U.S. forces below the 138,000 level for the next year.

In Afghanistan, a somewhat forgotten war continued and, if anything, intensified. By Dec. 29, 98 U.S. troops had been killed, nearly double the number killed in any other year of the war that started in October 2001.

The Italy-based Southern European Task Force took overall command of the U.S.-led operation early in the year. The year built up to a historic September election and, as the year closed, NATO was poised to expand its role in the country.

In October, troops deployed to Afghanistan were called on to help with earthquake relief missions in neighboring Pakistan. An Oct. 8 quake killed more than 80,000 people in the region, and as the year ended, U.S. military hospital units from Germany and Okinawa were still treating victims.

In the end, it is impossible to record or note all of the daily triumphs and tragedies of the year in Iraq and Afghanistan. U.S. troops undertook the routine, the heroic, the day-to-day struggles in a combat zone. It was, in short, a year spent at war.

A look at some of the noteworthy events of 2005:

Jan. 12: The White House announces that the search for weapons of mass destruction in Iraq is officially over.

Jan. 26: Thirty-one Marines are killed in a helicopter crash in western Iraq; a sandstorm is blamed for the crash, the single deadliest incident of the Iraq war.

Feb. 3: A civilian passenger plane carrying 104 people crashes during a snowstorm after attempting to land at the Kabul airport. All aboard are killed. The Kam Air Boeing 737 flight was from Herat to Kabul.

Feb. 28: In one of the deadliest attacks by the insurgency, 115 candidates for the Iraqi police forces are killed by a suicide bomber in Hillah.

March 5: U.S. soldiers shoot at a car carrying Italian journalist Guiliana Sgrena, who had just been freed from captivity hours earlier. An Italian intelligence officer is killed in the incident, sparking an international row.

March 17: On the same day Secretary of State Condoleezza Rice visits Afghanistan, five Afghans are killed and more than 30 others wounded in a bomb attack near Kandahar. Rice met in Kabul with President Hamid Karzai; the two announced a parliamentary election date for September.

March 29: The Iraqi National Assembly convenes for the first time.

April 4: At a White House ceremony, the family of Sgt. 1st Class Paul R. Smith is presented with his Medal of Honor, the first awarded for actions during the Iraq war.

April 6: Jalal Talabani, a Kurd, is elected president of the new Iraqi government. Adel Abdul-Mahdi, a Shiite, and Ghazi al Yawer, a Sunni, are elected vice presidents. The next day, Ibrahim al Jaafari, a Shiite, is appointed prime minister.

April 6: Eighteen American personnel &#8212; including three contractors &#8212; are killed when a CH-47 Chinook crashes during a sandstorm near Ghazni, Afghanistan. Among the dead are five members of the Germany-based 159th Aviation Regiment and three members of the Italy-based 173rd Airborne Brigade.

May 2:Twenty-eight people are killed and 70 wounded in a mysterious blast at an ammunition dump in northern Afghanistan. The stockpile belonged to a local warlord in Pajga, Baghlan province.

May 4: U.S. military officials report more than 40 insurgents are killed in a battle with coalition troops near Kandahar.

May 11: At least four people are killed in anti-U.S. rioting near the eastern city of Jalalabad, Afghanistan, after a later-discredited Newsweek report about desecration of Qurans at the U.S. prison in Guantanamo Bay, Cuba.

June 3: Brig. Gen. Jay Hood, head of &#8220;Task Force Guantanamo,&#8221; says a military inquiry confirmed five cases of interrogators or guards mishandling the Quran, but says no copies were flushed down a toilet.

June 22: U.S. troops operating in Zabul province report killing 48 insurgents in an 11-hour battle that erupted after the suspected Taliban fighters tried to ambush a patrol near Dey Chopan.

June 23: Six servicemembers, including four female Marines, are killed in a suicide attack on a convoy in Fallujah, Iraq. Thirteen Marines were wounded in the incident, including 11 women. It is the deadliest day for U.S. military women since World War II.

June 28: While on a rescue mission for a team of ambushed Navy SEALs, a U.S. special operations Chinook is shot down by insurgents near Asadabad. Sixteen servicemembers are killed. One of the SEAL team members is later rescued after hiding in an Afghan village.

July 3: The man who was to become Egypt&#8217;s ambassador to Iraq is kidnapped by gunmen in Baghdad. He is killed on July 7. Later in the month, other diplomats are kidnapped.

July 11: Four prisoners escape from the high-security U.S. prison on Bagram Air Base, Afghanistan. Later in the year, officials acknowledge the escapees include a senior al-Qaida operative.

July 17: The first charges of crimes against humanity &#8212; relating to the killing of 148 people in the village of Dujail &#8212; are filed against Saddam Hussein. The same day, a suicide bomber targets a fuel tanker in Musayyib, Iraq, killing more than 70 people and wounding 150 others.

Aug. 3: Fourteen Marines are killed when their amphibious assault vehicle hits a land mine near the Syrian border. Two days earlier, six Marines from the same unit were killed in a firefight near the same town.

Sept. 10: U.S. and Iraqi forces launch a sweeping offensive in the northern city of Tal Afar, clearing out insurgents in what had been a haven of the insurgency.

Sept. 18: In a historic vote, Afghans turn out in droves to elect their first representative parliamentary government.

Sept. 25:Five U.S. servicemembers are killed when a CH-47 Chinook is shot down in southern Afghanistan. The chopper had just dropped off troops on a combat mission.

Oct. 8: A massive earthquake kills more than 80,000 people in Pakistan and Afghanistan. U.S. troops &#8212; including helicopter and medical units &#8212; are dispatched to participate in relief efforts.

Oct. 15: Iraqi voters turn out by the millions to approve a national constitution. A December vote on the makeup of the government is set.

Oct. 19: The trial of Saddam opens, and after a brief few hours, adjourns for five weeks. The trial continues in fits and starts through the end of the year.

Oct. 20: Controversy erupts after a television report showing the burning of dead Taliban fighters in Afghanistan. Two U.S. soldiers are later given administrative punishments for the incident.

Nov. 1: An Article 32 hearing recommends court-martial proceedings for Staff Sgt. Alberto B. Martinez, accused of killing two of his superior officers in June. The attack involved grenades and a Claymore mine and occurred on FOB Danger, then a division headquarters.

Nov. 11: Secretary of State Rice inaugurates the first Provincial Reconstruction Team in Iraq, while on a visit to Mosul. The concept, which began in Afghanistan, combines military, diplomatic and engineering efforts to help in rebuilding efforts.

Nov. 22: U.S. forces officially hand FOB Danger &#8212; a palace complex near Tikirt &#8212; back to Iraqi control, marking what a U.S. official calls &#8220;the most significant transition of real estate thus far.&#8221; The ceremony, attended by the U.S. ambassador and other dignitaries, is interrupted by a mortar attack about 300 yards from the gathering.

Dec. 1: Ten Marines are killed near Fallujah when a string of makeshift bombs goes off in their temporary patrol base. The Marines had just finished an in-the-field promotion ceremony.

Dec. 15:Millions of Iraqis go to polling places to elect their first full-term government since the 2003 American invasion. Early voting results show Shiite parties in the lead; by late December, Sunnis and other groups were protesting the results, which had not yet been finalized.

Dec. 23:Secretary of Defense Donald Rumsfeld visits troops in Fallujah and announces that troop levels for Iraq will be reduced to below 138,000 in 2006. Plans call for the number of combat brigades in Iraq to go from 17 to 15.