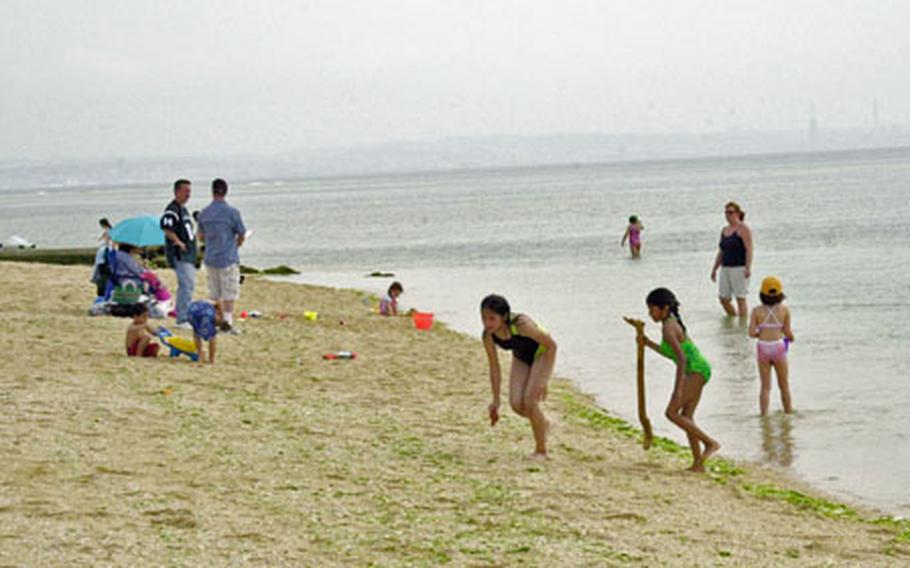 Beach visitors go about their usual activities Friday at Okinawa’s Torii Beach despite news that an 18-foot great white shark escaped from a large net off the beach’s coast earlier that morning. (Erik Slavin / S&S)

The shark was trapped by fishermen in a fixed shore net located about 530 yards off Torii Beach around 7:30 a.m. Thursday, according to Yomitan Fishermen’s Association spokesman Akira Maeda.

“We made an arrangement with Ocean Expo Park so that they could transport the shark to the aquarium [Friday],” Maeda said.

The shark was unharmed and was observed “swimming leisurely” within the cylinder-shaped, 65-feet-deep net Thursday by aquarium staff from Ocean Expo Park, located about an hour north of Torii Beach.

“But [Friday] morning, when the fishermen went back to the stationary net at about 8:30 a.m., they found an empty net with a huge hole,” Maeda said.

“We’re concerned and we don’t want to see anyone hurt, but we don’t think there is much of a threat,” Hagland said.

Although most beachgoers were unaware of the shark at Torii Beach Friday, those who were notified were not overly alarmed.

“We’ll just stay closer to the shore, probably not past those rocks,” said Air Force Major Derek Paulk, pointing about 15 feet from shore while his daughter Lauren, 8, snorkeled.

The shark still may be close to the area where it escaped, said Ocean Expo Park senior staff member Hideshi Teruya.

“She might come back to the net again,” Teruya said. “Our staff was so excited because it would be the … largest one that our aquarium has ever kept if she were safely captured.”

Most experts speculate that great whites are capable of growing to a maximum of 22 feet in some cases, according to the University of Florida’s International Shark Attack File.

Although sharks have been portrayed as bloodthirsty monsters in movies such as “Jaws,” most steer clear of humans, said Ed Dunn, longtime diver and publisher of an Okinawa weekend boating and dive forecast.

“There is a lot of misinformation about sharks,” Dunn said. “They are very intelligent animals.”

The mako, bull, tiger and great white sharks are among the few known for aggression toward humans, Dunn said; however, even a great white usually will swim away from a large group of people in the water, Dunn said.

“If it’s been sighted in a certain area, I wouldn’t go in the water,” Dunn said.

It is difficult to predict movements of a migratory animal like a great white shark, experts say.

“If a female is pregnant it would come in close looking for food source,” Dunn said. “If food isn’t available in the quantity it needs, it would leave. If food is plentiful, it would stay in the area.”

Attacks on the rise, but still unlikely

A person’s odds of being attacked by a shark is 1 in 11.5 million, according to a 2000 survey posted by the University of Florida’s International Shark Attack File.

However, shark attacks have risen during the past decade because more people are venturing out into the water, according to shark attack file Web editor George Burress.

Great whites are highly migratory sharks that have been found off coasts on every continent except Antarctica. They usually stay in temperate waters, but have been spotted in isolated incidents off the Canadian and Alaskan coasts, according to the file.

The great white has been credited with more fatal attacks on humans than any other species of shark, according to Burress.

Surfers and body boarders should be wary of shark-heavy areas, because to sharks their silhouettes resemble a tasty seal. In most reported attacks on surfers, sharks will withdraw after their first bite tells them that the surfer isn’t a seal.