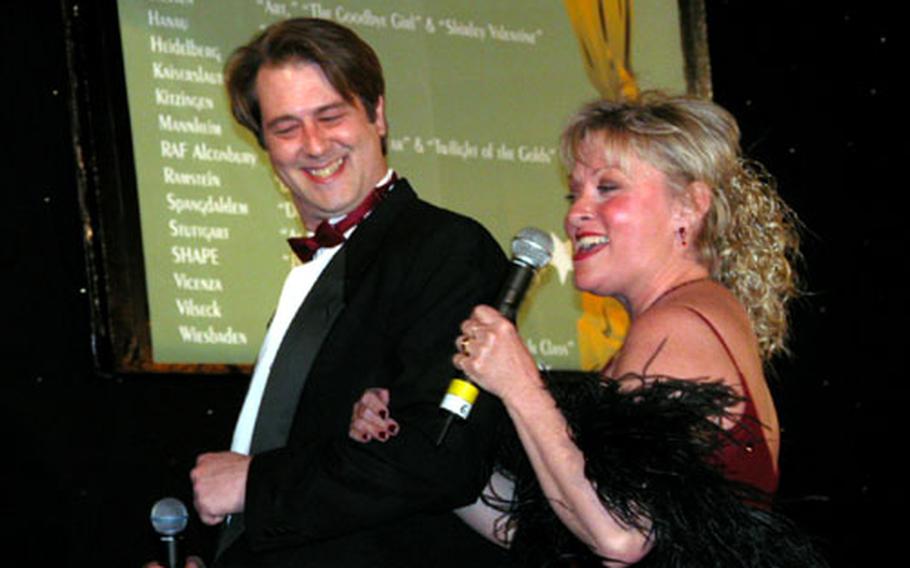 Capt. Carlos Santiago, a JAG from Heidelberg, belts out a tune during one of the ensemble numbers. (Charlie Coon / S&S) 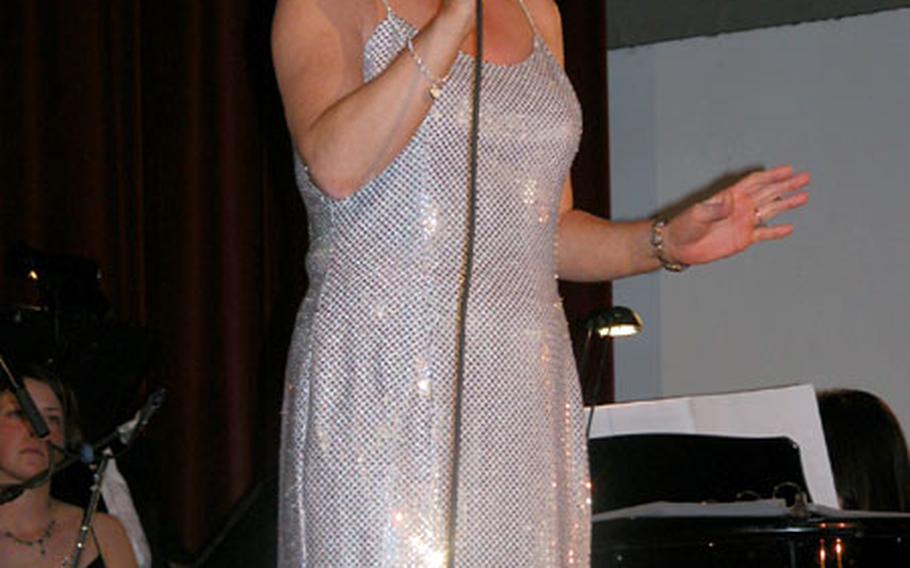 Diane Montgomery of the Vicenza Soldiers Theatre sings "I Will Be Loved Tonight" from "I Love You, You&#39;re Perfect, Now Change." (Charlie Coon / S&S) Tyler Proctor of Kaiserslautern Army Community Theatre won for Best Youth Performance in a Play. The 13-year-old played Rudy in "Over the Tavern." (Charlie Coon / S&S)

There was singing and dancing all night long. Ladies sparkled in their gowns and gentlemen looked suave in tuxedos.

For the nearly 600 guests Saturday at the Village Pavilion, the evening topped anything on Broadway. The night was theirs &#8212; the 2003 Tournament of Plays Awards Show and Ceremony. The Toppers, for short.

&#8220;This is to reward people for their outstanding work,&#8221; said James Sohre, U.S. Army Europe entertainment director, who produced the program.

Twenty-three productions vied for this year&#8217;s Toppers. In the crowd were people from 18 military communities in Germany, Belgium and Italy. Most of them work in the theater for free.

For those keeping score, the Bamberg Stable Theatre&#8217;s production of &#8220;Into The Woods&#8221; won 10 Toppers, the most on the evening, including best musical. Three theater veterans &#8212; from Ireland, New York City and Los Angeles &#8212; saw all 23 performances and chose the winners.

Before the show, everyone shared war stories while downing hors d&#8217;oeuvres and cocktails. Some stood in small groups; others sat at tables covered by white linen and candles.

They laughed and hugged one another in the hearty American way (as opposed to the kiss-kiss French way). Six big chandeliers lit up the great room.

Douglas Tack, a cook at the Village Pavilion, had the honor of slicing the roast beef as hungry guests held out their plates. The key to proper slicing?

Keith A. Savage held a steady hand around his savory sandwich. Savage would be performing, too &#8212; he&#8217;d be shining the spotlight on the winners.

Up on the stage at the front of the hall, an eight-piece orchestra was positioned off to one side. The musicians would have a busy night. They&#8217;d play for three hours &#8212; accompanying special performers, filling gaps in the program.

Anytime music was needed to keep the show moving, they kicked in with horns, woodwinds and keyboards. A drummer and bassist kept the beat.

The program began with a zippy medley of Broadway hits unofficially titled &#8220;Twenty-six songs in 17 minutes.&#8221;

Capt. Carlos Santiago, an Army lawyer from Heidelberg, was one of the 14 performers who rotated in and out of the opening number. Santiago is used to performing in the court room. Being on stage is similar, he said, but different.

The show started at 7:30 p.m. and wrapped at 10:30 p.m. And while the program was long, it was also brisk. There were no long thank-you speeches and dragged-out performances.

The winners bounded onstage to get their Topper, posed for a quick snapshot and got off.

Vikki Hanrahan, the entertainment director for the 235th Base Support Battalion in Ansbach, was presented the James A. Martin Award for her starring role behind the scenes.

One of Hanrahan&#8217;s jobs is to nurture the community theater in Ansbach. She noted that almost everyone is a volunteer. And while servicemembers and their families take part, so do civilians and European local nationals.

The first payoff came when the curtain is raised at local community theaters and audiences are entertained.

The next came Saturday night, when for one splendid evening the artists gathered and the bright lights of Broadway shined down on them.

On this night, it could have been Radio City Music Hall.