200 airmen gear up for deployment downrange 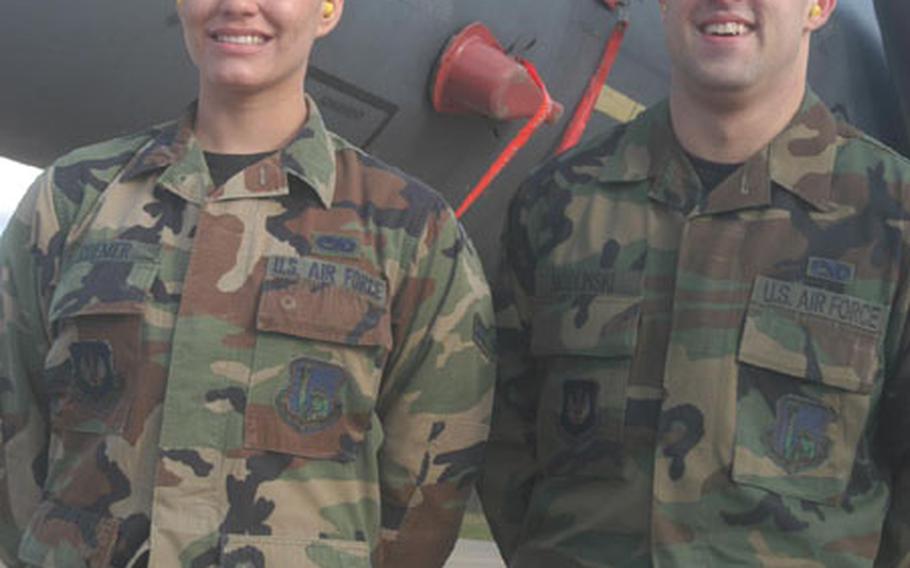 Airman 1st Class Keri Roemer, left, and Staff Sgt. Dave Modlinski will join 200 other airmen from the 48th Fighter Wing on a deployment to the Central Command area of responsibility next month. The wing&#39;s 492nd Fighter Squadron from RAF Lakenheath, England, will spend about 90 days downrange. (Ron Jensen / S&S)

RAF LAKENHEATH, England &#8212; More than 200 airmen from the 48th Fighter Wing will deploy next month to the U.S. Central Command area of responsibility.

The 492nd Fighter Squadron will take about six of its F-15E Strike Eagles to the region to provide air power for the ongoing effort to bring peace and democracy to Iraq.

The exact location of the squadron&#8217;s temporary home during the three-month deployment cannot be released.

DiNenna is a veteran of the area and the mission: He was operations director of the 494th Fighter Squadron when it deployed last fall.

&#8220;There were a few things that happened and we were asked to support the ground troops by employing weapons,&#8221; he said on a cold, windy flight line Thursday morning as the squadron prepared for the journey.

His current squadron, he said, recently completed training with tactical ground controllers who would be the eyes on the ground for any necessary fire support from the air.

Staff Sgt. Dave Modlinski, a crew chief, is looking forward to the deployment, which is part of the Air and Space Expeditionary Force 7 cycle. He said squadron members have a chance to grow closer together during their time downrange.

Asked for their thoughts regarding the soldiers who are on the ground in Iraq and risking enemy attacks on a daily basis, Modlinski and Airman 1st Class Keri Roemer, another crew chief, both spoke of their admiration.

DiNenna said the mission is not without risks to the pilots and aircraft. He noted that insurgents firing rocket-propelled grenades have shot helicopters from the sky.

But, he said, the F-15s fly higher and faster than the helicopters.

DiNenna said the squadron is motivated for the mission, despite the separation from family and friends.