20 years ago, US troops began peacekeeping mission in Bosnia 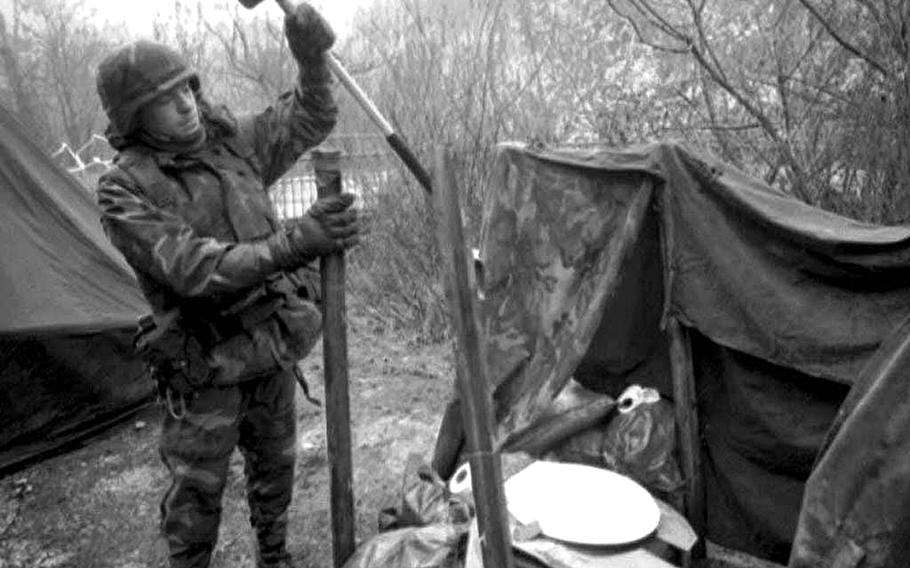 Sgt. Dennis Schaffer of Company A, 2nd Battalion., 68th Armored Regiment, based in Baumholder, Germany, drives an iron pole into the frozen turf while setting up a makeshift toilet at a checkpoint near Olovo, Bosnia-Herzegovina, 45-miles south of Tuzla in January 1996. (Stars and Stripes)

Sgt. Dennis Schaffer of Company A, 2nd Battalion., 68th Armored Regiment, based in Baumholder, Germany, drives an iron pole into the frozen turf while setting up a makeshift toilet at a checkpoint near Olovo, Bosnia-Herzegovina, 45-miles south of Tuzla in January 1996. (Stars and Stripes) 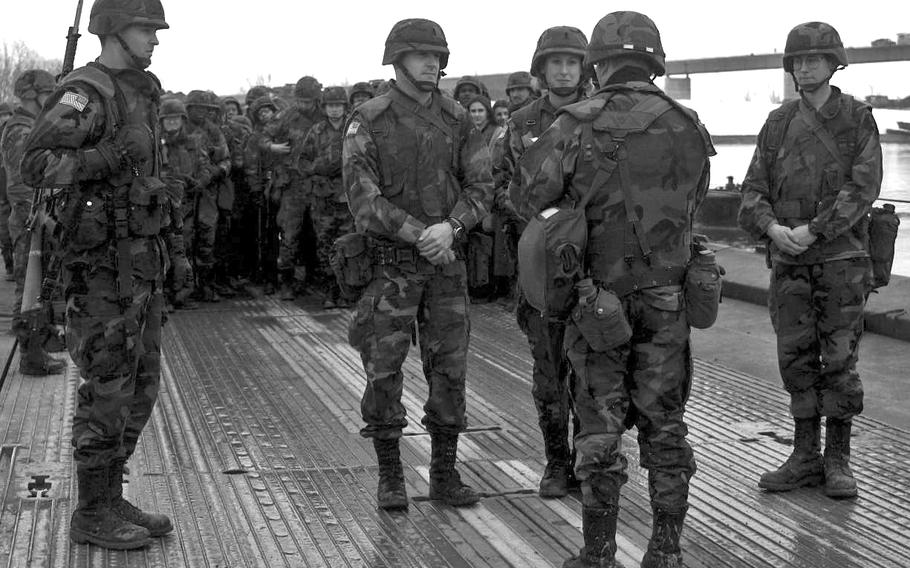 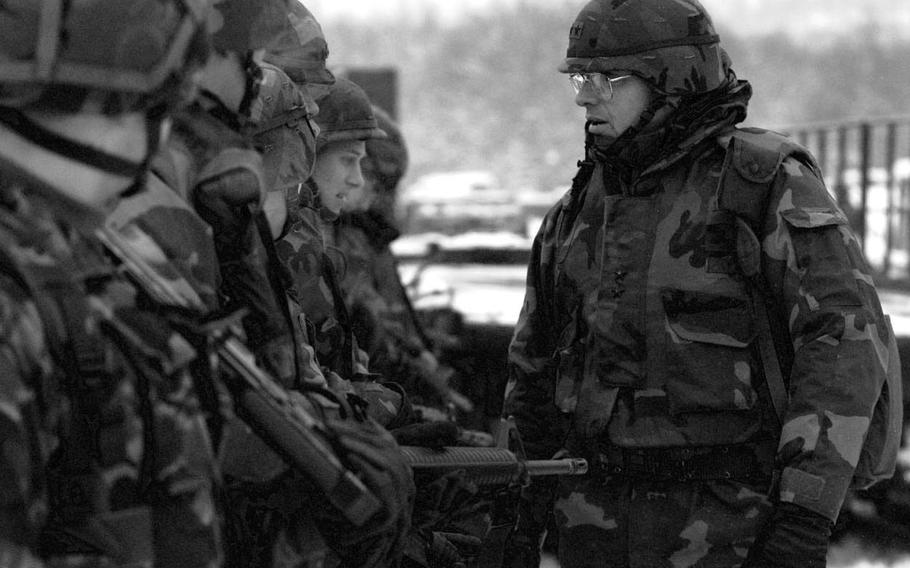 Maj. Gen. William L. Nash, then commander of American forces in Bosnia-Herzegovina, talks to troops on the Tuzla Air Base flightline in February 1996. (Michael Abrams/Stars and Stripes) 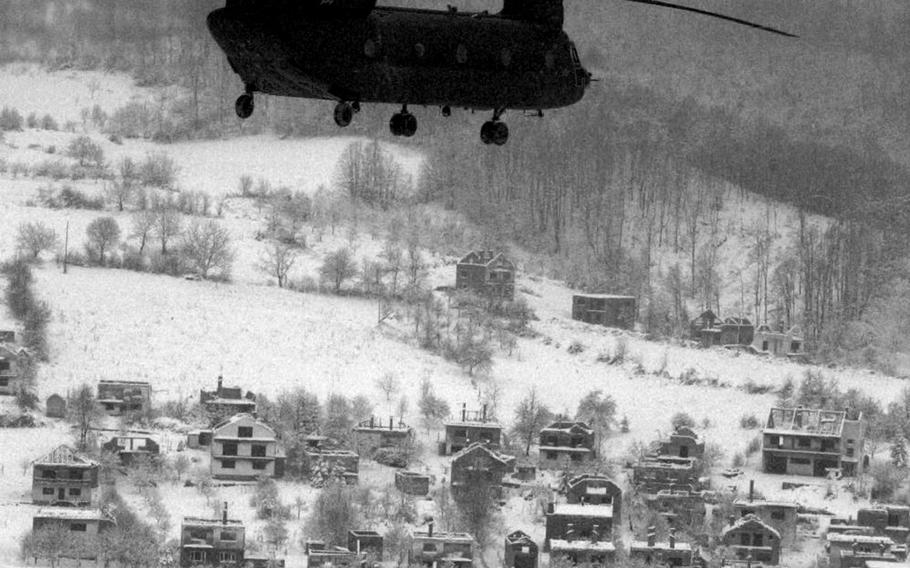 A Chinook of the 159th Aviation Regiment flies over a destroyed village in Bosnia early in the NATO-led Implementation Force mission Joint Endeavour, which began Dec. 20, 1995. The scars of war were a familiar sight for IFOR soldiers in Bosnia-Herzegovina. (Stars and Stripes) 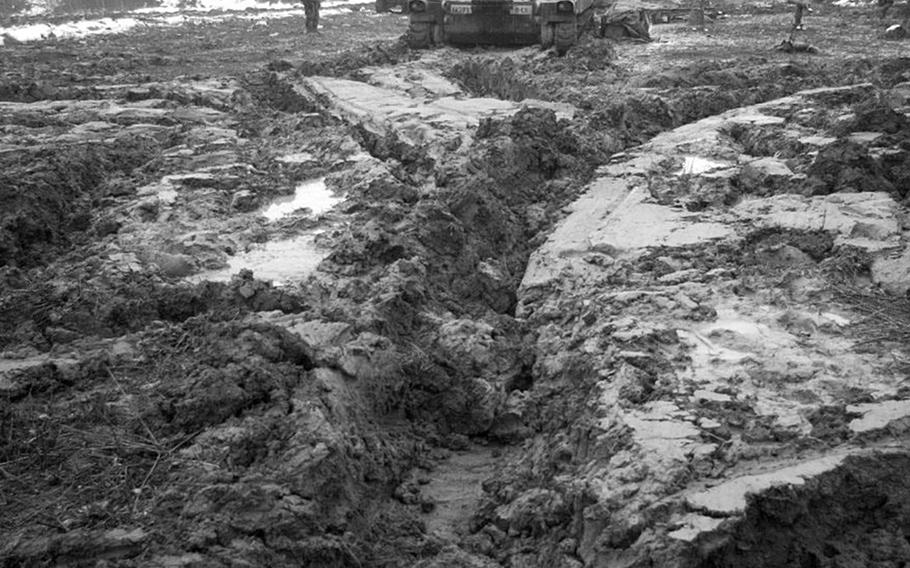 Soldiers from the 1st Armored Division's 1st Brigade attempt to dig their howitzer from the knee-deep mud while setting up camp 45 kilometers north of Tuzla, in northern Bosnia-Herzegovnia on Jan. 24, 1996. (Stars and Stripes) 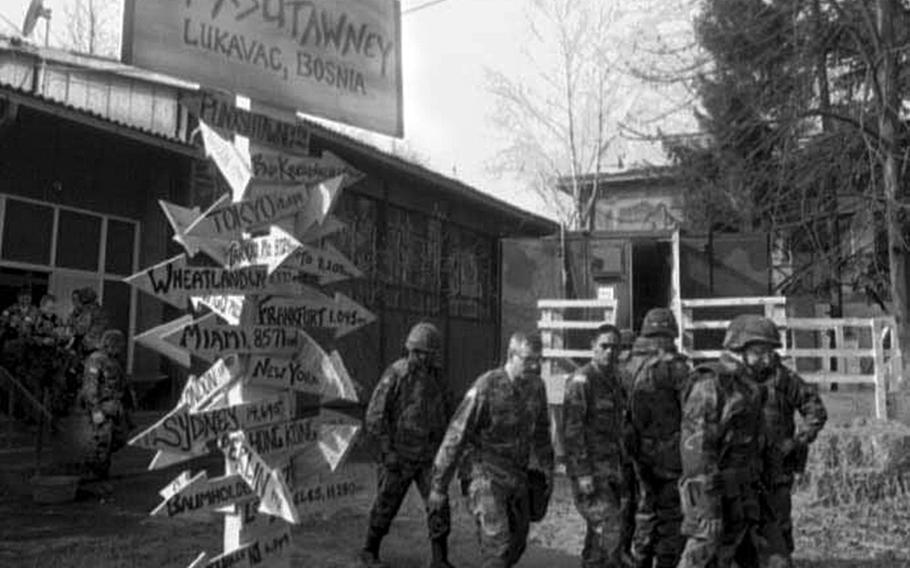 A new sign post in February 1996 proclaims Lukavac base camp in Bosnia-Herzegovina as Camp Punxsutawney, a reference to the movie Groundhog Day because every day seemed the same. (Stars and Stripes) 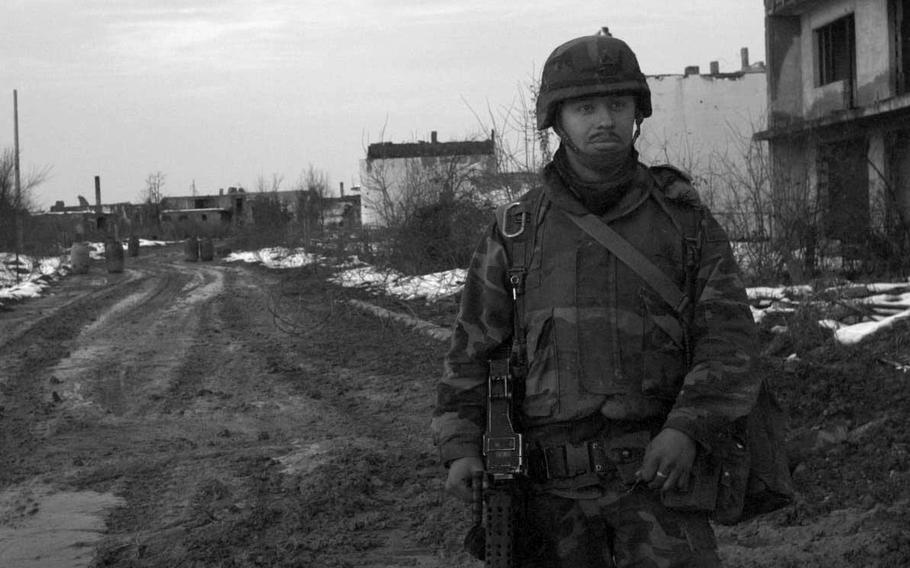 Cpl. Miguel Medina, infantryman out of Kirch-Goens, Germany, at desolate checkpoint Number 9 near Omerbegovaca, Bosnia-Herzegovina in February 1996. Troops called it the Violators' Checkpoint, but they wouldn't say why. (Stars and Stripes) 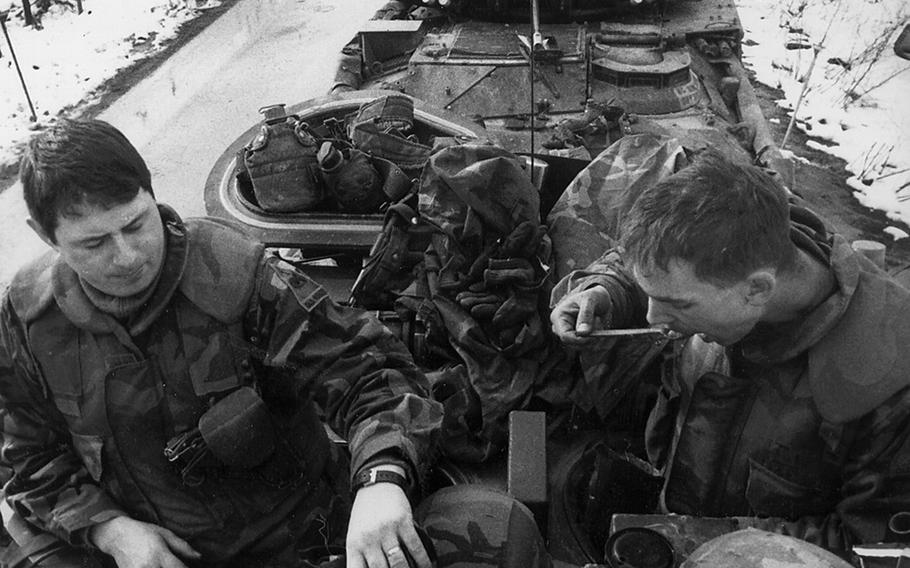 1st Armored Division soldiers catch meals where and whenever they can during the early days of the NATO-led Implementation Force deployment in Bosnia-Herzegovina from December 1995 to December 1996. (Stars and Stripes) 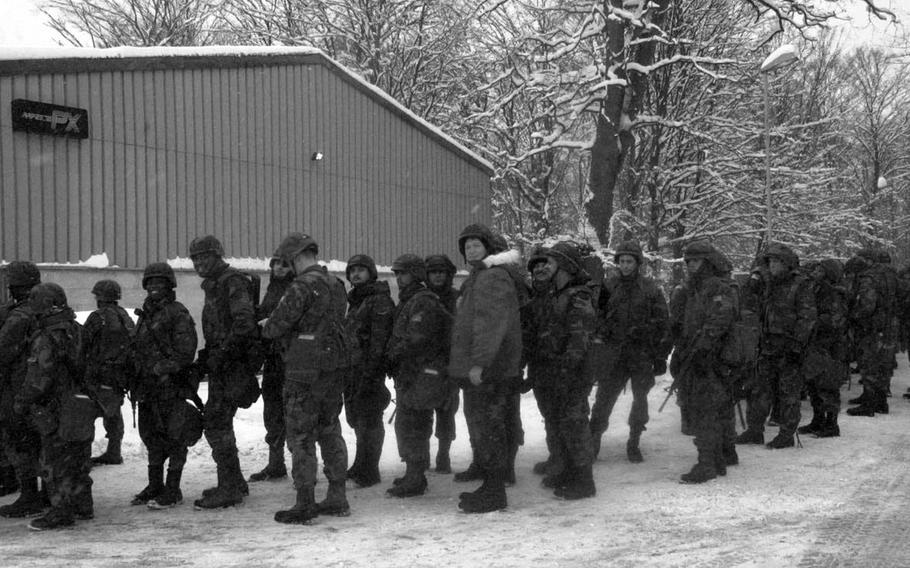 Servicemembers at Tuzla Air Base stand in line on opening day of the AAFES PX, Feb. 9, 1996. They braved the long lines outside, and at the cash registers, for their first chance to shop at the Army and Air Force Exchange Service store in Bosnia-Herzegovina. (Michael Abrams/Stars and Stripes)

It’s been 20 years since U.S. troops entered Bosnia-Herzegovina as part of a peacekeeping mission, marching over a massive pontoon bridge across the flooded Sava River on the border with Croatia.

Some 20,000 U.S. troops eventually took part in NATO’s first deployment outside alliance territory, accounting for a third of alliance forces sent to help keep a fragile peace among Bosnia’s Muslim, Croat and Serb communities. Many of the peacekeepers were posted to isolated outposts along the confrontation lines between the Muslim-Croat federation and the Bosnian Serb entity during the freezing winter months of 1996.

The Dayton Accords, which ended the 3 1/2-year civil war, called for the deployment of thousands of peacekeepers to man cease-fire lines between the warring sides. They also oversaw the removal of heavy weapons from the front lines and the demarcation of the boundary between Bosnia’s two constituent entities — the Muslim-Croat Federation and the Serb Republic.

Gradually the Implementation Force, known initially as IFOR and later as SFOR (for Stabilization Force), would build up to nearly 60,000 troops from 32 countries.

IFOR replaced the widely ridiculed U.N. military mission, which had unsuccessfully sought to dampen the fighting in which nearly 100,000 people perished.

U.S. troops accounted for about a third of the IFOR force, both in Bosnia and in bases in surrounding countries, which were used as logistics hubs. Most of the initial units were drawn from garrisons in Germany where they had been stationed during the Cold War. IFOR’s first commander was U.S. Adm. Leighton W. Smith.

Eventually, more than 60,000 U.S. troops, including National Guard units, participated in the NATO force in Bosnia.

In 2004, NATO handed over responsibility for security in Bosnia to a much smaller European Union force, which remains in place to this day.

Not a single American soldier was killed in combat in Bosnia, although several did die from other causes.

In 1999, thousands of U.S. and NATO troops were stationed in nearby Kosovo to carry out a similar deployment that continues today.