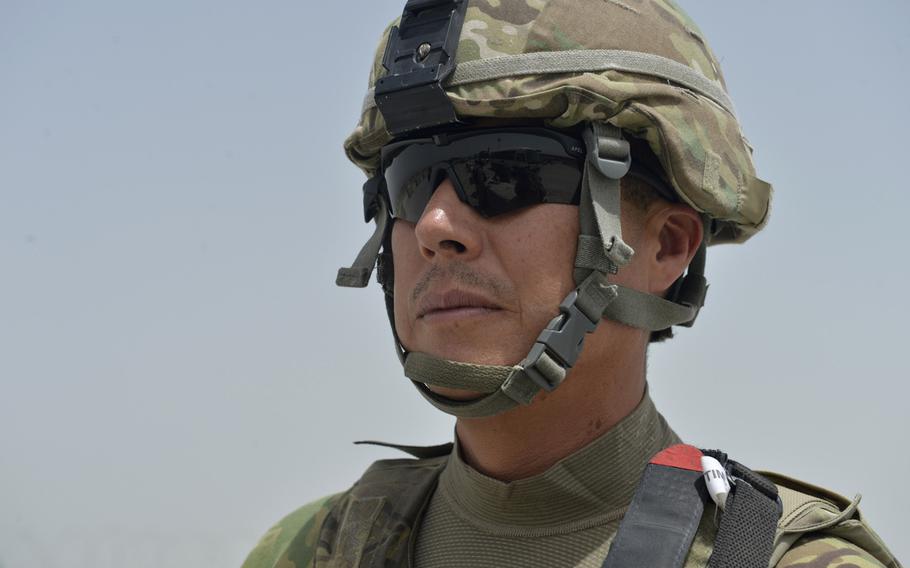 Air Force Staff Sgt. Jesus Yanez stands at his post at Bagram Air Field, Afghanistan, on July 2, 2014. Yanez has served in every branch of the military except for the Coast Guard. (Evelyn Chavez/U.S. Air Force)

Air Force Staff Sgt. Jesus Yanez stands at his post at Bagram Air Field, Afghanistan, on July 2, 2014. Yanez has served in every branch of the military except for the Coast Guard. (Evelyn Chavez/U.S. Air Force) El Paso native Jesus Yanez, now a staff sergeant in the U.S. Air Force, has served in every branch of the military except the Coast Guard. He joined the Marine Corps while still in high school and went to boot camp in 1993. (Courtesy of Jesus Yanez) Air Force Staff Sgt. Jesus Yanez stands in front of his sector station at Bagram Airfield, Afghanistan July 2, 2014. Yanez has served in every branch of the military except for the Coast Guard. (Evelyn Chavez/U.S. Air Force) Air Force Staff Sgt. Jesus Yanez of the 455th Expeditionary Base Defense Squadron walks a perimeter patrol at Bagram Airfield, Afghanistan July 2, 2014. Yanez, who also has served in the Marines, Navy and Army, joined the Air Force to get the opportunity to serve in a combat zone. (Evelyn Chavez/U.S. Air Force)

Over the years, the El Paso, Texas, native went from one job to the next, one command to another. He requested downrange deployments and continued his years of service.

More than 20 years later, the 39-year-old has a rather unusual military resumé.

The Defense Department doesn’t closely track how many troops have served in all four main branches, but it’s a pretty exclusive club.

In the past 10 years, more than 2 million U.S. troops have deployed overseas. Of those, only 40,385 have served in more than one branch, according to Defense Department records.

“I didn’t do it intentionally,” Yanez said, laughing when reached by phone last month from Bagram Airfield, where he has been deployed since June. “It just happened.”

Yanez — now serving with the 455th Expeditionary Base Defense Squadron — said he hadn’t really thought about it until a friend pointed it out to him.

Yanez, the middle child of five raised by a single mother, grew up fast and was a worker, delivering newspapers, selling greeting cards and working at a local pizzeria. When he was a junior in high school, he sought out the local Marine recruiter and signed up through the delayed entry program.

“I went looking for [the recruiter] before he could come looking for me,” Yanez said. “Everyone thought I was crazy, joining the Marines as a junior in high school.”

Yanez was “in the rear with the gear” in logistics and as a warehouseman. He loved being a Marine. But then he got married, and after a few years, he decided to get out, separating in 1997.

Soon after, he was divorced and said he got the itch to serve again.

“I guess that’s what I missed a lot, the military way,” he said.

In 1999, he joined the Navy Reserve as a master at arms. But the Sept. 11, 2001, terror attacks prompted him to switch gears. He sought and received a conditional letter of release from the Navy so he could join the Army Reserve.

In the Army Reserves, Yanez served as a heavy wheel mechanic at Fort Bliss, Texas.

But he didn’t get to deploy, which led him to ask for another conditional release — this time to join the Air Force’s 204th Security Forces Squadron, which Yanez described as an Air Force “light infantry unit.”

The full-time job, which he took in 2006, keeps him in El Paso, where he is raising his two children.

“As a single father, this was a better option, because it avoided moving my kids to another place,” he said previously in an Air Force statement.

It also allowed him to finally get downrange, first to Iraq in 2010, where he guarded Baghdad International Airport with a .50-caliber machine gun, and now to Afghanistan, where he checks vehicles and locals for contraband and vehicle-borne explosives.

His experience has made him an asset to his unit and garnered the attention of his superiors.

“He brings a ton of experience to the fight,” 455th Expeditionary Base Defense Squadron's chief enlisted manager, Chief Master Sgt. Eric Soluri, said in the Air Force statement. “Younger airmen and NCOs look up to him, and he is the ‘go-to guy’ in his sector.”

From the Marine Corps to the Navy, the Army to the Air Force, Yanez has noted more similarities in the branches than differences — in the camaraderie, teamwork and in the responsibility to take care of one another. Yet each branch has taught him lessons that he tries to instill in junior airmen. For one, he said, he got his discipline from the Marine Corps: “Once a Marine, always a Marine.”

For every bead of sweat shed in service of the country he loves, Yanez said he has been paid back in full. He is the only member of his family with a college degree. He received his master’s degree while serving. He has also earned the admiration of his children.

“My son and daughter think of me as their hero,” he said. “They’re always bragging about me.”

Yanez has 11 years in the active-duty military and 10 as a reservist. He plans to retire when he hits 30 years of service.

He has no second thoughts about dedicating his life to the military.

“Not a day goes by where I regret what I do,” he said. “If you want to do something for your country, you do it right.”

At 39, Yanez said he has no plans of joining the Coast Guard, even though he has looked into it.