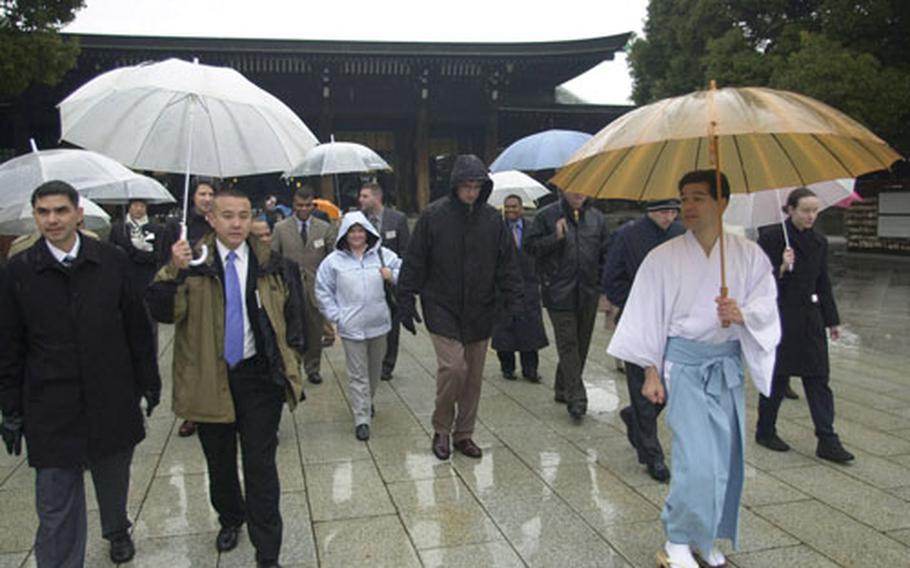 Shinto priest Moriyasu Ito, right, leads a group of 20 U.S. Forces Japan officers around the Meiji Shrine grounds during a portion of the Japanese Ministry of Foreign Affairs orientation on Wednesday. MOFA pays for USFJ officers new to Okinawa and mainland Japan to attend the four-day course in Tokyo so they can better appreciate the political and cultural nuances of their host nation. (Paul Newell / S&S) 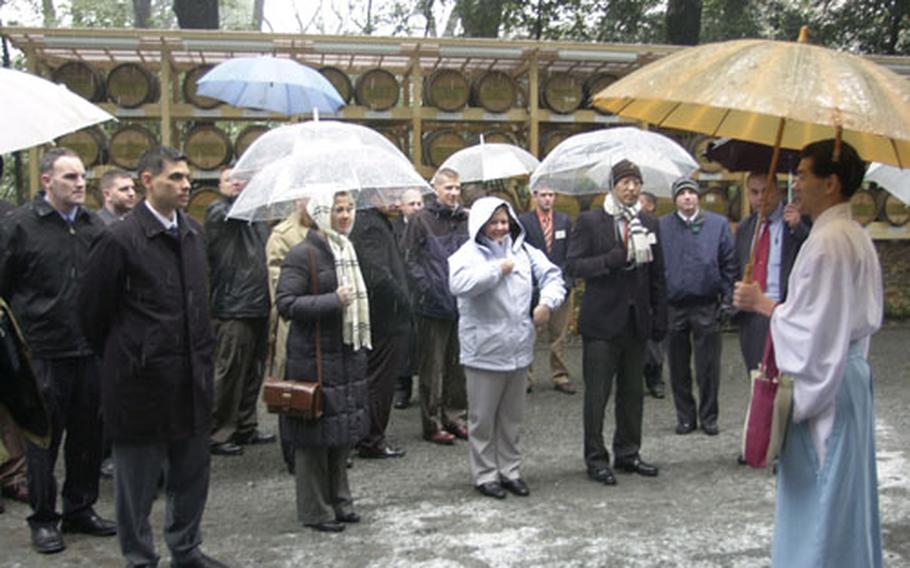 Twenty officers from Okinawa and Japan listen to Shinto priest Moriyasu Ito, right, during his presentation of Shinto culture at Meiji Shrine in Tokyo on Wednesday. (Paul Newell / S&S)

Even in sharp-looking suits, overcoats and umbrellas, the officers touring Tokyo&#8217;s snow-covered Meiji Shrine on Wednesday didn&#8217;t look like they were there on official business.

As part of Japan&#8217;s Ministry of Foreign Affairs Orientation Program, 20 servicemembers from Okinawa and mainland Japan were in Tokyo for a four-day course meant to promote &#8220;good neighbor&#8221; relations, a ministry press release stated.

Though touring some of Tokyo&#8217;s best-known sights was perhaps the most enjoyable component of the agenda, &#8220;the reality is that three-fourths of the program is lectures and receptions meant for the officers to have frank discussions with government officials,&#8221; said Ana Moreno, a U.S. Forces Japan international relations specialist who helped set up the visit.

The MOFA program, which began in 1995, selects officers new to their host nation. Moreno said the ministry pays for the servicemembers&#8217; lodging, meals and transportation within the city in hopes of providing an authentic Japanese experience that highlights distinctions between East and West.

&#8220;We hope to provide clues to the participants in understanding Japanese ways of thinking,&#8221; said Fumihito Shinooka, a MOFA Status of Forces Japan division official who organized the program this year. &#8220;We have had positive feedback from U.S. Forces Japan saying the program is beneficial.&#8221;

Officers stay at a ryokan &#8212; a traditional Japanese inn &#8212; where guests must remove their shoes before entering and sleep on tatami flooring.

Participants are also taken to Japanese restaurants and encouraged to order traditional cuisine. &#8220;If they want to go to McDonald&#8217;s, they&#8217;re going to have to sneak out late at night,&#8221; Moreno said.

But by then most would probably be too tired. The itinerary is chock full of visits. Before their stop at Meiji, the group spent the entire morning at MOFA listening to presentations by ministry officials. After spending about 30 minutes at the shrine, they were shuttled to the Sony Corp. for more talks.

After dinner, the officers were scheduled for a reception at the U.S. Embassy to speak with more officials.

Marine Maj. Keith Smith, a foreign criminal jurisdiction officer with the Office of the Staff Judge Advocate at Camp Butler on Okinawa, said for him the program has had a practical application.

&#8220;It&#8217;s important that I came up here and learned how the Ministry of Foreign Affairs works,&#8221; he said. &#8220;I interact with local police investigators and prosecutors on a regular basis. This helps me have a better understanding of the cultural underpinnings of the government and the country.&#8221;