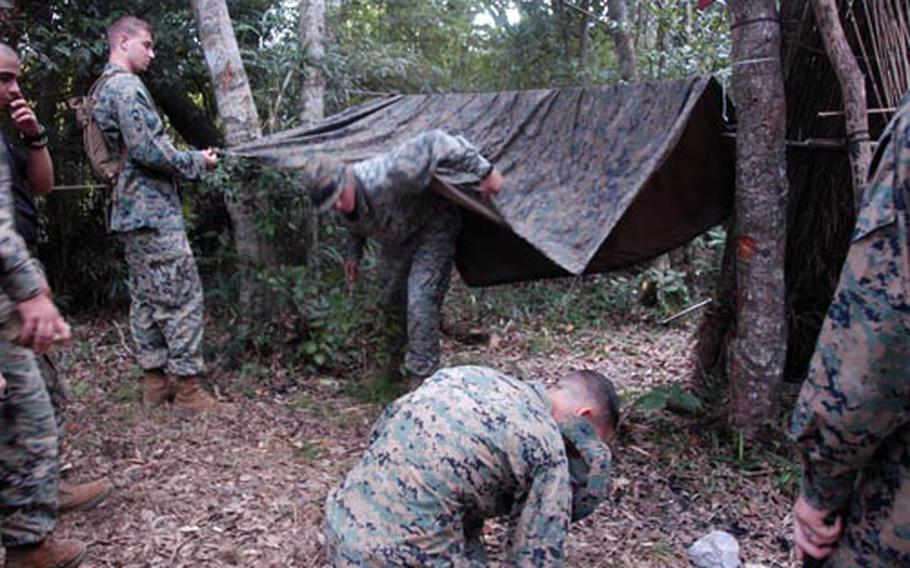 Marines from the 3rd Fleet Anti-terrorism Security Team, 1st Platoon build a tent using a poncho and tree limbs they cut down during survival training Tuesday at the Jungle Warfare Center on Okinawa. The poncho shelter is one of the quickest shelters to assemble. (Natasha Lee / S&S)

Marines from the 3rd Fleet Anti-terrorism Security Team, 1st Platoon build a tent using a poncho and tree limbs they cut down during survival training Tuesday at the Jungle Warfare Center on Okinawa. The poncho shelter is one of the quickest shelters to assemble. (Natasha Lee / S&S) 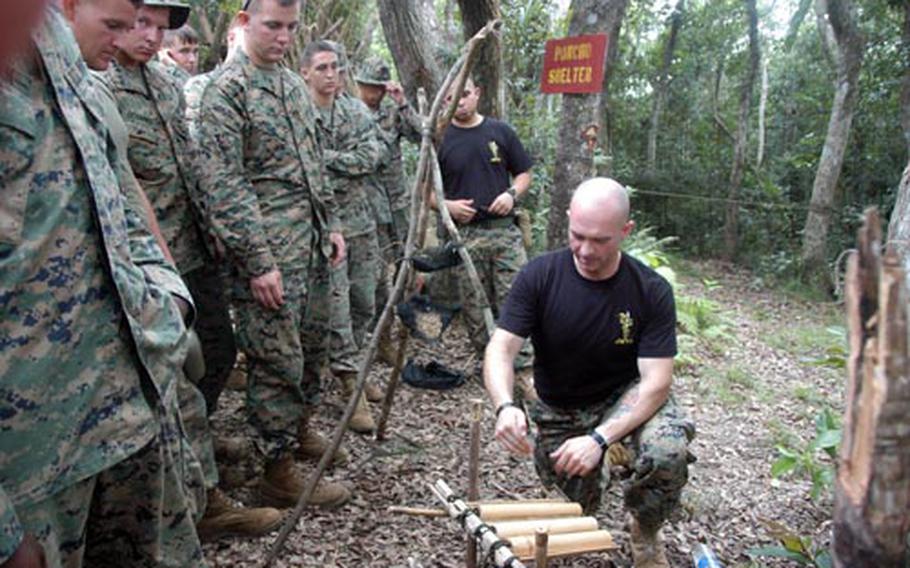 Instructor Cpl. Raymond Szumigala shows Marines how to use bamboo and cords to make a device to catch and filter rain water during survival training Tuesday at the Jungle Warfare Center on Okinawa. (Natasha Lee / S&S) Staff Sgt. Benjamin Luna checks on the makeshift stovetop that is brewing broth to flavor chicken and rabbit for a stew. Marines learned how to build fires to cook food and keep warm during survival training Tuesday at the Jungle Warfare Center on Okinawa. (Natasha Lee / S&S) 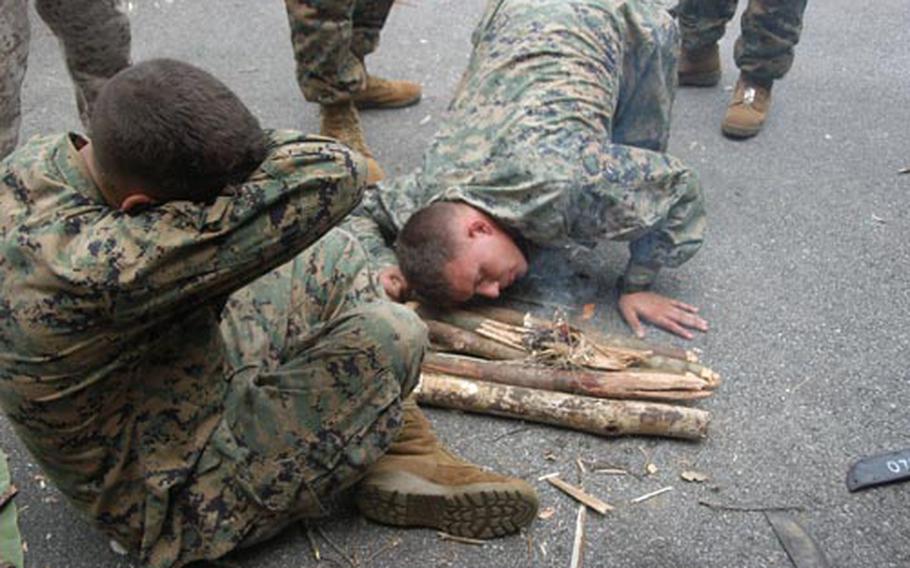 Cpl. Jeffrey Hansen, center, blows on the flames to keep them going as Pfc. Ryan E. White shields his face from the smoke. Their Marine team was the first to successfully build and start a fire using tree limbs and branches during survival training Tuesday at the Jungle Warfare Center on Okinawa. (Natasha Lee / S&S)

CAMP GONSALVES, Okinawa - After 18 hours without food, rabbit stew sounds about as tasty as a New York strip steak.

Lopez and 19 other Marines went into the wild Tuesday to learn to survive in the jungle.

The rugged terrain, stifling humidity and labyrinth of thick brush and trees at the Jungle Warfare Center were unfamiliar conditions for these Marines from the 3rd Fleet Anti-terrorism Security Team, 1st Platoon.

Since February, the platoon has been attached to the U.S. 7th Fleet at Yokosuka Naval Base in mainland Japan, said platoon Gunnery Sgt. Edward Palacios.

These FAST Marines are more accustomed to practicing defensive combat and security operations than shaving wood chips off a tree limb to build a fire.

"This was a good opportunity for young Marines to pick up some different skills," Palacios said. "This is training not normally trained in infantry."

For Lopez, skinning the rabbit that was to be his only meal for the day was the first time he&#8217;d ever helped kill his dinner.

As part of the training, Marines can eat only what they kill or pick from the vegetation.

"I was thinking about it, that it was going to feel disgusting. But it felt warm," he said of the dead rabbit.

The skinless gray rabbit was later put into broth and cooked over an open fire.

Primitive? Maybe. But the task wasn&#8217;t about taste or cruelty, it was about endurance.

"We could deploy anywhere around the world and you could have the best gear and still go down," said Cpl. Jeffrey Hansen. "It comes down to the basics &#8212; it&#8217;s what keeps you alive."

The training was part of a five-day basic jungle survival course. Following its conclusion, the Marines will be tested on these skills during a three-day evaluation at the training center.

Mind over matter is the key to coming out of a desolate situation alive, said chief instructor Staff Sgt. Benjamin Luna.

Instructors teach troops to focus on equipment they typically carry &#8212; a cigarette lighter, a knife &#8212; to build a fire and make a dagger or spear for hunting.

Marines are encouraged to use their imagination, from finding rocks and old coffee cans to building traps to catch squirrels, to wrapping plastic bags around the leaves to soak up precipitation for drinking water.

The FAST Marines also learned to navigate without a compass, tell time using the sun, set up shelter out of harm&#8217;s way and distinguish between edible and poisonous plants.

It&#8217;s not just about rubbing two sticks together until smoke arises, Luna said.

Camp commander Lt. Col. Thomas Goessman stressed the importance of readiness and knowing how to properly prepare and cook an animal.

He cited the 1988 case of a 19-year-old Marine who died from dehydration after being left behind in the desert at Twentynine Palms in California, and of Christopher McCandless, a 24-year-old Emory University graduate who died in 1992 of starvation in the Alaskan wilderness.

Even though they weren&#8217;t in a jungle, they needed basic skills to survive, he said.

"It&#8217;s not a game. This is about killing and preserving animals so you can eat," he said.

This was the second time the course was held this year.

For Cpl. Nelson Santiago, from Newark, N.J., ripping the head off a chicken was a first.