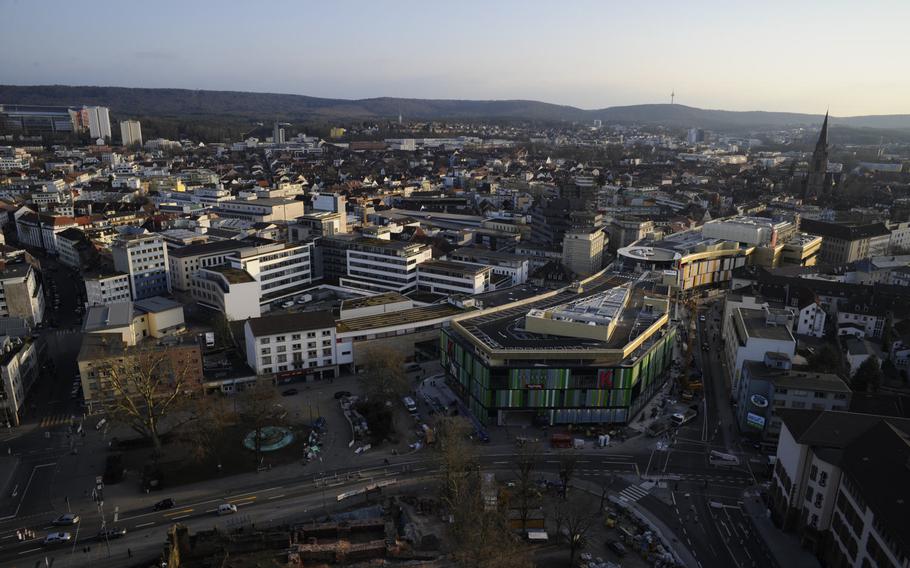 The K in Lautern mall in downtown Kaiserslautern, Germany, as seen from the city's municipal building. A 24-year-old American soldier has been arrested for releasing a substance like pepper spray in the mall on Saturday in an incident that shut down the building's first floor. (Andrew Yurkovsky/Stars and Stripes)

KAISERSLAUTERN, Germany — Two U.S. soldiers deployed from the States are under investigation in the discharge of pepper spray Saturday at the K in Lautern shopping mall, U.S. military officials and German police said.

It was not known whether the pepper spray was discharged accidentally or if the soldiers will face criminal charges, Master Sgt. Brent M. Williams, a spokesman for Mission Command Element-Atlantic Resolve, said Tuesday.

The incident prompted officials to close the first floor of the mall for about 30 minutes, police in Kaiserslautern said in a statement. Twenty people received medical treatment for breathing difficulties, though no one was admitted to the hospital, police said.

Williams said reports indicate that a pepper spray canister discharged while in possession of one of the two soldiers while they were at the retail store. He said the soldiers left the location and reported what happened to their chain of command. The soldiers were also treated for injuries sustained in the incident, Williams said.

Kaiserslautern police previously said one of the soldiers was arrested, but Williams could not confirm that. He said the two soldiers were referred to the provost marshal.

The soldiers are deployed to Eastern Europe to train with NATO allies, but Williams declined to name the soldiers’ units in the States.