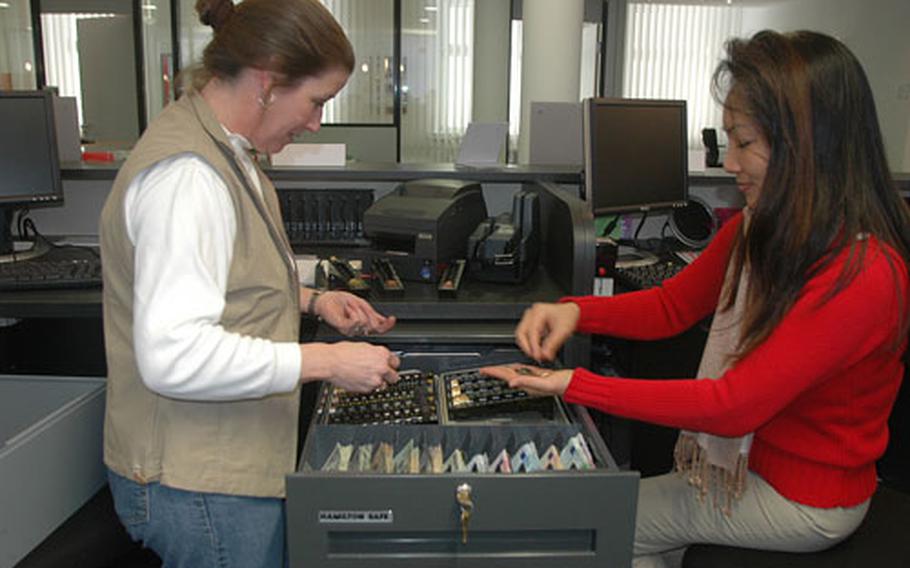 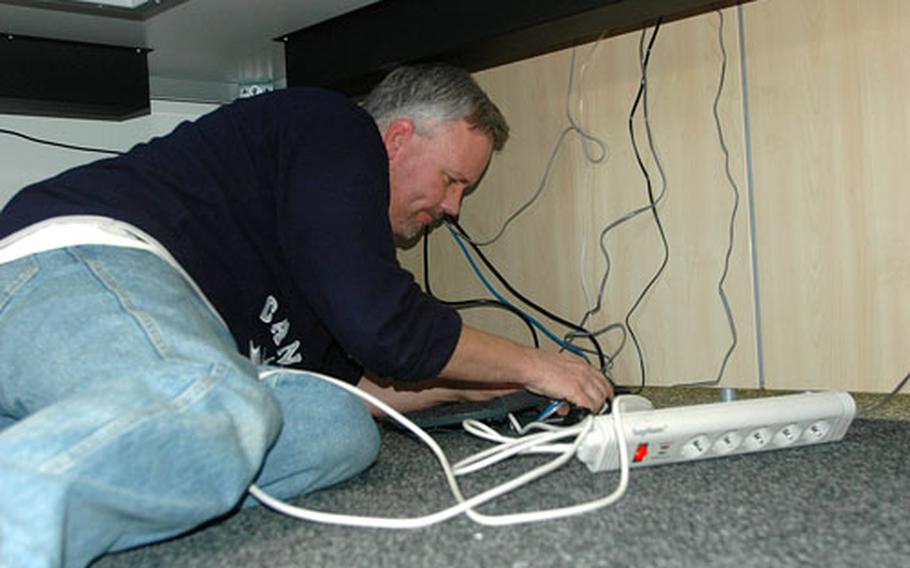 Kevin Canada of U.S. Army Garrison Stuttgart installs a computer on Friday at the Value Added Tax office in the Community Services building at Panzer Casern near Stuttgart, Germany. The building opens on Monday, and many of the services previously found at Patch Barracks will now be located at Panzer. (Charlie Coon / S&S)

B&#214;BLINGEN, Germany &#8212; Two grand openings in Stuttgart in the next 10 days will shift a major portion of the military community&#8217;s services from congested Patch Barracks to Panzer Casern, five miles to the south.

On Monday, a four-story building housing a bank, credit union, Army Community Services and other staples will open at Panzer. Then on Feb. 7, a ribbon-cutting ceremony is scheduled for a 140,000-square-foot post exchange, the largest in Europe.

The two buildings are near each other and also near the two-year-old Stuttgart Welcome Center, which handles Army Garrison Stuttgart&#8217;s housing, transportation and processing offices.

The result is that anyone moving into or leaving the Stuttgart military community, or shopping there, or seeking a myriad other services, would now go to Panzer Casern and not Patch.

&#8220;The bottom line is that it makes it easier for our community members,&#8221; said Hugh McBride, a spokesman for U.S. Army Garrison Stuttgart.

Offices that are needed by incoming and outgoing personnel &#8212; such as for ID cards, driver&#8217;s licenses and vehicle registration, banking, shipping of household goods &#8212; would all be within walking distance of one another.

A seven-story hotel is scheduled to be built nearby, possibly opening in fall or winter 2008, enabling personnel to stay there until housing issues are settled.

Patch Barracks, home of the U.S. European Command headquarters and other military organizations, has since the mid-1990s been the crowded nexus of Stuttgart military life.

In addition to the buildings used by the military, Patch is home to two schools, two aging post exchanges and other stores, a health clinic, multiple offices and several large housing areas.

For years, parking spots have been hard to find there. That should also be helped by moving the non-military entities and the traffic they produce.

Patch wasn&#8217;t always the place where Stuttgart-based Americans went to shop and meet. During the 1970s and 1980s, Robinson Barracks, on the north side of Stuttgart, had the top shopping stores and was a prime gathering area, according to Bob Gambert, a retired soldier and 29-year resident of the city.

But when the U.S. military began its post-Cold War reduction of troops in Germany, bases to the north and east of Stuttgart were closed, and the focus of military life shifted to south of the city, where Patch Barracks, Panzer Casern and Kelley Barracks are located.