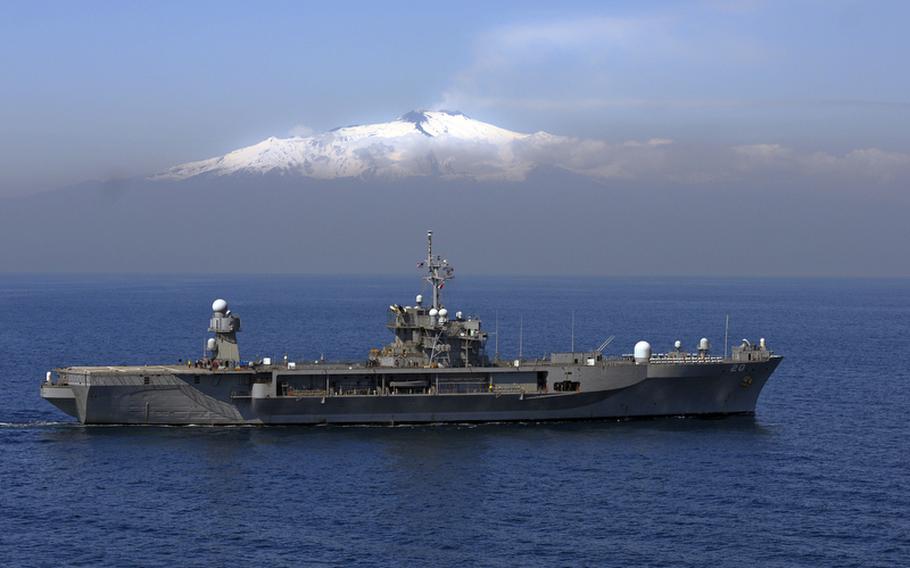 The U.S. 6th Fleet flagship Mount Whitney, seen here sailing past Mount Etna, is one of only two flagships in today?s Navy. Originally slated to be decommissioned in the next few years after four decades of services, the Navy will extend its service life to 2039. ()

NAPLES, Italy &mdash; In a nod to budget concerns and the needs of the future fleet, the Navy is planning to nearly double the service lives of its two flagships.

The Japan-based USS Blue Ridge and Italy-based USS Mount Whitney were commissioned in 1970 and 1971, respectively, and slated to be replaced in coming years.

But with other needs within the fleet and the Navy facing potential budget cuts, the current 7th Fleet and 6th Fleet flagships will be in service until at least 2029, with plans being developed to extend their use to 2039, according to the Navy&rsquo;s long-term shipbuilding plan and other assessments.

&ldquo;It is pretty unprecedented to see a ship that is likely to serve for such a long time,&rdquo; said Eric Wertheim, a defense consultant, author and editor of the Naval Institute&rsquo;s &ldquo;Combat Fleets of the World,&rdquo; adding that &ldquo;70 years is certainly extreme.&rdquo;

The Navy&rsquo;s 30-year shipbuilding plan included replacements for the two command and control ships in fiscal 2008. But the service has since removed the replacements from the plan, according to the Navy assessment &ldquo;Taking a 40 Year Ship to 70 years: LCC 19 Class Extended Service Life.&rdquo;

The assessment team found that both flagships &ldquo;are in good material condition,&rdquo; but will require extensive maintenance to make it to 2039.

&ldquo;With the service lives of USS Blue Ridge and USS Mount Whitney being extended to 2039 and possibly beyond, it is critical that adequate resources are provided to maintain, sustain, and retain these platforms,&rdquo; the report states.

The Blue Ridge is currently under Navy control, while the Mount Whitney is under the control of the Military Sealift Command, the assessment said. These differences, the assessment notes, &ldquo;present unique challenges in the criteria for assessing each platform, and the recommendations provided.&rdquo;

While both ships receive roughly the same amount of maintenance funding a year, the Yokosuka-based Blue Ridge is able to perform five times as many &ldquo;mandays&rdquo; of work annually than the Naples-based flagship Mount Whitney, according to the report, which is based on ship assessments done throughout 2010.

&ldquo;This is a result of the current austere home port conditions, lack of local industrial facilities, and currently approved maintenance model in place and approved by Navy and (Military Sealift Command) leadership for USS Mount Whitney,&rdquo; the report states.

While the Blue Ridge is scheduled to receive yearly maintenance for repairs, upkeep and selected alterations through fiscal 2028, the Mount Whitney was set to receive only sporadic maintenance through the same time period, according to the assessment.

&ldquo;The current USS Mount Whitney maintenance model was designed to support the ship until (decommissioning) in FY2012,&rdquo; the assessment states. &ldquo;The existing model must be changed in order to support this hull through 2039.&rdquo;

Maintenance attention will be particularly important to the heating and air-conditioning systems, hull structure and ship stability characteristics, according to the assessment.

As part of this new lease on life, the Mount Whitney will undergo additional maintenance and upgrades in the coming years, according to Military Sealift Command spokeswoman Laura Seal.

The so-called Extended Service Life Program will provide the Mount Whitney with maintenance each year from fiscal 2013 to fiscal 2019, instead of two times every five years, Seal said in an email.

&ldquo;After Sept. 30, 2019, the ship will revert back to its normal maintenance schedule,&rdquo; she said.

The extended service program will focus on replacing deteriorating steel in the hull, tanks and superstructure, as well as identifying and upgrading components that will become obsolete or irreplaceable in the future, Seal said.

Homeported in Gaeta, Italy, a 90-minute drive north of 6th Fleet&rsquo;s Naples headquarters, the Mount Whitney has seen increased activity in the past year, including serving as the nerve center for Operation Odyssey Dawn, the U.S. mission in Libya that preceded NATO&rsquo;s Operation Unified Protector this year.

Known in Navy ship-class and hull jargon as &ldquo;LCC 20,&rdquo; the ship wasn&rsquo;t always so heavily used, according to Capt. Jeffrey Ruth, who ended his command of the Mount Whitney in September.

&ldquo;This ship used to have a reputation of being a &lsquo;building 20,&rsquo; &rdquo; he said. &ldquo;It never got under way. That&rsquo;s no longer the case. The appetite for this ship both from 6th Fleet and NATO commanders is only increasing.&rdquo;

&ldquo;We just kind of try to be good stewards of the ship and try to make decisions knowing that what we do now will be dealt with by the crews that follow us,&rdquo; he said.

&ldquo;We used to say, maybe we can get away with not having that fixed because the ship is going away,&rdquo; Ruth said.

The Mount Whitney went in for a $9.2 million, 60-day &ldquo;regular overhaul&rdquo; maintenance session in Croatia on Sept. 15, according to Seal.

Ships like the Mount Whitney and Blue Ridge will need &ldquo;quite a bit of work&rdquo; to stay functional, Wertheim said.

Even with the Navy budget facing potential cuts and a continuing high operational tempo, the service can&rsquo;t shortchange the ships&rsquo; maintenance, he said.

The service life extension of the Navy&rsquo;s only two flagships reflects where the Navy stands today, and its priorities, Wertheim said.

&ldquo;They are looking at the reality, and the reality is, when you have a very limited amount of money, you have to think about where you want to invest it more carefully,&rdquo; he said. &ldquo;A new hull for a command ship is not a pressing priority.&rdquo;