2 Koreas hold talks on improving relations amid flurry of diplomacy 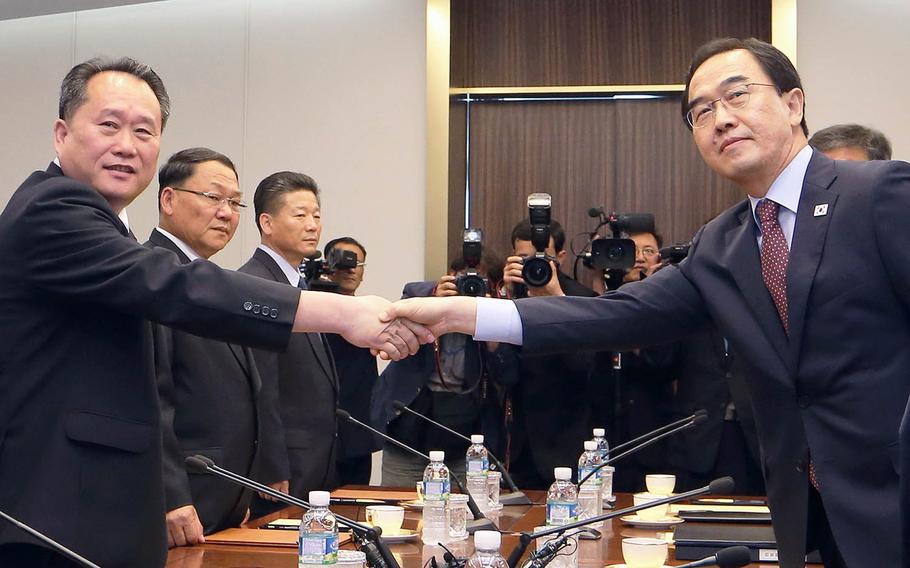 SEOUL, South Korea — North and South Korea resumed high-level talks on improving relations Friday, adding another layer to a flurry of diplomacy aimed at salvaging a U.S.-North Korean summit and resolving the crisis over the North’s nuclear weapons program.

The meeting in the truce village of Panmunjom happened as senior U.S. and North Korean officials are racing to try to find enough common ground to hold a planned June 12 summit between President Donald Trump and North Korean leader Kim Jong Un in Singapore.

South Korea is eager to maintain the momentum for peace after Kim and South Korean President Moon Jae-in agreed at a landmark April 27 summit to try to replace an armistice that ended the 1950-53 Korean War and achieve the “complete denuclearization” of the divided peninsula.

The two sides agreed to open a liaison office inside the North Korean border city of Kaesong and to discuss holding joint celebrations to mark the 18th anniversary of the first inter-Korean summit.

They also announced plans for military talks on June 14 and a Red Cross meeting on June 22 in North Korea focused on planned reunions of families separated by the war.

"I believe that there is no problem that we cannot solve together if we deal with it based on trust, respect and understanding of the other side," Cho said at the start of the talks in a building on the South Korean side of Panmunjom.

Moon and Kim set lofty goals during their April 27 summit, which was the third inter-Korean summit after those held by their predecessors in 2007 and 2000. They also agreed to halt all hostile acts against each other and to hold reunions for families divided by the war on Aug. 15.

The two leaders held a previously unscheduled meeting on May 26 after Trump abruptly canceled plans for his upcoming summit with Kim.

They agreed to send senior officials to Friday’s meetings to map out steps toward implementing what is called the Panmunjom declaration.

Their bilateral efforts have been complicated by U.S.-North Korean nuclear talks and sanctions imposed to punish the North for its weapons programs that prevent most economic cooperation.

The U.S. president, meanwhile, has adopted a warmer tone after the North issued a conciliatory letter and diplomats have held separate meetings in the United States, Singapore and Panmunjom to try to put the summit back on track.