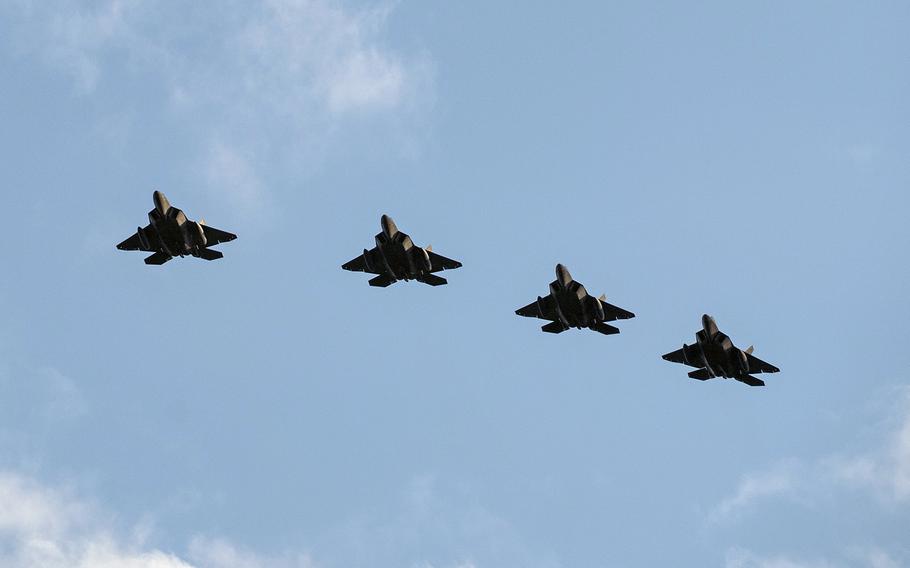 Four U.S. Air Force F-22 Raptors assigned to the 95th Fighter Squadron at Tyndall Air Force Base, Fla., fly in formation Friday, Aug. 28, 2015, over Spangdahlem Air Base, Germany. This is the first training deployment of the F-22s in the U.S. European Command theater. Two of the Raptors arrived at Lask Air Base in central Poland on Monday to carry out combat air exercises for a day with the Polish air force. (Christopher Ruano/U.S. Air Force)

KAISERSLAUTERN, Germany — Just three days after touching down in Germany, two of the F-22 fighter planes on their inaugural deployment to Europe have jetted east to conduct training with the Polish air force.

The Raptors arrived at Lask Air Base in central Poland on Monday, a spokesman with U.S. Air Forces in Europe–Air Forces Africa confirmed. The Associated Press reported the jets were to carry out combat air exercises for a day with their Polish counterparts.

The Air Force on Friday deployed the four stealth jets from Tyndall Air Base, Fla., to Spangdahlem Air Base, a move that Air Force leaders have tied to Russia’s involvement in Ukraine, even as they stress the deployment is for training purposes.

“We’ll get the F-22 into facilities that we would potentially use in a conflict in Europe, things like the bases where we do aviation attachments, to places where we do air policing missions,” Air Force Chief of Staff Mark A. Welsh III said last week. “They’re there primarily for an exercise, training with our European partners.”

Poland, a NATO ally, has hosted a U.S. Air Force aviation detachment since November 2012. The unit operates from Lask and hosts U.S. and allied aircraft conducting training exercises in Poland.